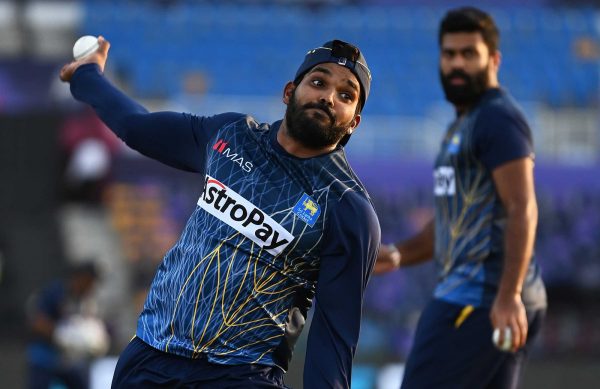 “No doubt he’ll be trying to out-bowl him.”

Australian players thought Zampa, three spots behind Hasaranga on the ICC T20 bowling rankings, should have been named player-of-the-tournament at the T20 World Cup they won in November for his 13 wickets and economy rate of 5.81.

Only Hasaranga, who is also a handy lower-order batter and said last year that Smith was his cricket idol, had more victims than the Australian (playing one extra game), taking 16 wickets and only going at 5.20.

“He’s the guy we’ve been relying on as Sri Lankans,” former Sri Lanka batter Russel Arnold told cricket.com.au. “Quietly, he’s been making it. He’s keeping up to the expectations, or the belief that he’s created about himself.

“He’s got a good attitude and, unlike most Sri Lankans, he’s not timid.

“He’s kind of a street fighter, always looking to make things happen and he’ll look to compete. That’s the kind of quality that’s pushing him on and on.”

Hasaranga first impressed Sri Lankan selectors with his batting in domestic cricket but his low, skiddy leg-spinners are what has made him a force at international level.

The right-armer made an immediate impression for Sri Lanka when he destroyed Zimbabwe’s lower-order with a hat-trick on his one-day international debut in Galle back in 2017.

He had to wait another two years to make Sri Lanka’s T20I side and, after a promising start to his career, he hit a speed bump when he toured Australia in 2019 for their T20 series and got pummelled for 60 runs in four overs in two matches before being dropped for the final game of the tour.

“The first time you come here, everyone struggles and go through a lot of difficulties as you gain more experience,” Shanaka said on Thursday on the eve of the series opener. “He’s much older now so he’s fit to deliver.”

As a wrist-spinner who doesn’t possess a big-turning leg-break but relies on a hard-to-pick wrong’un, Hasaranga has been urged by Arnold to mimic Zampa’s method that has proven successful on his home turf.

That, believes Arnold, will hold him in good stead for the T20 World Cup in Australia later this year when Sri Lanka will be looking to improve on their group-stage exit last year.

“He goes low – he gets the ball to not bounce as much, which works for him,” Arnold said. “Similar to Zampa – bowl wicket-to-wicket and don’t turn it a lot. Just a few slight variations in pace and deviation which gets them in.

“When you come to Australia, he should look at Zampa and see what he does different.”

“The fact is that the type of bowler he is, he doesn’t need too much (assistance) off the pitch. He bowls a good wrong’un and that’s the kind of delivery that a lot of people struggle to pick.

“Considering that the T20 World Cup is (in Australia) at the end of the year, I think it’s ideal timing to see how they go, figure out what they need to work on and improve their game.”