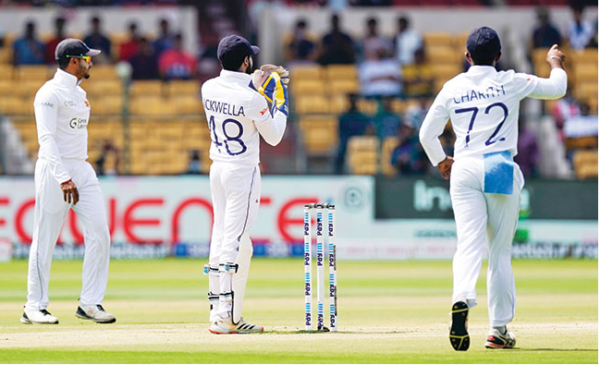 India have not just got the world’s best franchise tournament, they also have a robust Test team and Sri Lanka with a bloated First Class system were no match for the hosts as they were heading for a heavy defeat in the second Test here in Bangalore inside three days.

You can pardon Sri Lanka’s players for not being fit to hold a candle to the Indians as their opponents’ skill levels are far superior. But what is unpardonable is their mindless selections and sloppy cricket.

Niroshan Dickwella and Kusal Mendis are making a comeback since being suspended and a close look would tell you that they have learned little although they have been doing time for more than six months.

On the first day’s play, Mendis walked out to the field wearing a floppy hat although it’s a tradition for players to wear their Test cap on the first session of a Test match. It’s a tradition started by one of the nation’s exemplary leaders by the

name of Marvan Atapattu and maybe we should not expect lesser mortals like Mendis to follow suit. It is a man of Mendis’ stature the current selection committee appointed as vice-captain in May last year giving us a clear indication that here’s a future Test captain. Just in case that doom’s day dawns, Sri Lanka’s team meetings will be happening at the Cheers Pub.  To their credit, the rest of the Sri Lankan players were wearing their Test caps.

Sri Lanka have done some bizarre things this tour and they opened batting with Mendis on day one and that experiment lasted less than three overs. Then there’s Niroshan Dickwella, his partner in crime.

Dickwella’s reviewing has been horrendous for many years but Sri Lankan captains continue to depend on him. His counterpart Rishab Pant has been excellent giving skipper Rohit Sharma sound advice. In India’s first innings, Dickwella prompted his captain to review leg before wicket decisions on three occasions and on all three occasions it emerged that the batsmen had nicked the ball. The only advice you should be getting from Dickwella is which restaurants in Colombo have free corkage.

India’s lower middle order batsmen have cleverly farmed the strike from the tail-enders and helped the team score significant totals. Dickwella meanwhile is happy to give the strike back to the lower order batters. He is more content in finishing not out to boost up his average. The suspension has meant nothing for Dickwella. He continues to be impulsive, impatient, incompetent and incorrigible.

On a track where the bowlers had lot of assistance, India managed to score 252 runs having won the toss. Sri Lanka had reduced them to 126 for five but the last five batsmen contributed another 126 to help the team to a competitive total.

Sri Lanka were shot out for 109 runs in their first innings and at one stage were in danger of being bowled out for their lowest score against India. None of the batters managed a half-century as Jasprit Bumrah was on the money finishing with five wickets.

India declared their second innings on 303 for nine. Rishab Pant was like batting on a different wicket as he smashed 50 off 27 balls with six fours and two sixes. He broke Kapil Dev’s Indian record for fastest half-century in Tests. Kapil had scored in 30 deliveries against Pakistan 40 years ago. Pant’s record means nothing much against this hapless bowling attack.

Sri Lanka finished day two on 28 for one chasing an improbable target of 447. They still need 419 runs with nine wickets in hand.

‘This is wizard!’ 100-year-old woman who flew spitfires during the Second World War celebrates her centenary by getting behind the controls again – by SARAH OLIVER