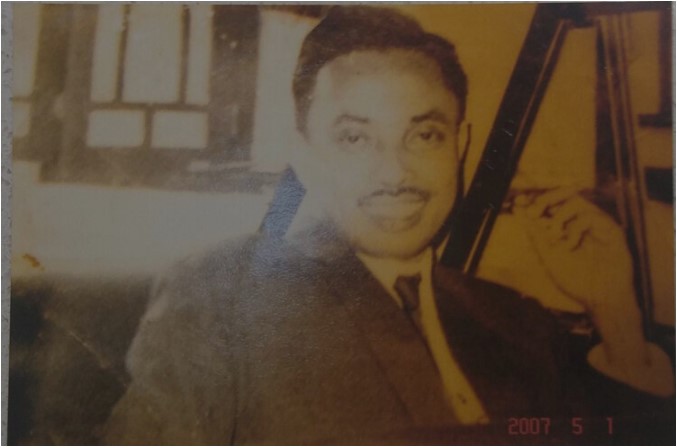 Photo circa 1970 during his heyday as a much sought-after film director, producer and speech writer to several politicians.

Sydney/ACT OBA is happy to add, his eldest son Kulasri Jayasinghe “like father like son” is keeping the Thomian spirit alive here Down Under (past committee member and President x 3 years)

41 years of service to College! We bring you reminiscences from students across the generational-divide.

My recollections of ‘Pappa’, he always made class interesting which was an achievement in itself to a majority of disinterested and rambunctious students. The class always had his attention, no mean feat, but this  was not by instilling fear or discipline, it was just by making the subject so interesting and grabbing  our total attention, in his own inimitable style.He had a habit of hanging on emphatically to the letters when teaching, dragging it on for as long as he could. There was not an ounce of viciousness in him, just a genuine desire to impart his ample knowledge for the betterment of his students. He was without doubt, one of my favourite teachers, and I am so pleased that he is being honoured, a recognition, in my opinion, long overdue.

“I first met our new history teacher in 1963 in Lower 4, I was 12 years old,  he may well have been in his early thirties. He had a round face with a laser eye. A remarkably practical man with hardly any respect for neatness – cigarettes for most but for him it was cigars from memory. One day he walked into class and read while pacing the floor; strong in voice his mind on the steps of Capitol Hill in Washington. He as far as we could tell and still recall was no less a person than John F Kennedy, “Ask not what your country can do for you – ask what you can do for your country,”
The language, the ideas, the atmosphere he created was electric. So much so that I became a Kenndy fan big time. I fell under his spell and began taking a strong interest in world history. Of course, other equally good teachers of history would build on the foundation he laid in my mind. Later on, I met him again in the economics class, where we spoke about demand and supply. Little did I realise that economics and history would play an essential role in my livelihood.

His personality was such that he never had to ever lay down the law. The students did that for him out of interest, respect and regard.
Pappa was a legend.

STC is an elite school, modeled after Eaton, that grooms boys with the best of English and Sports. There is a certain degree of truth in this perception held by the outsiders. However, it is only a few insiders know that this elite school that produced country’s first few leaders, also had the best of Sinhala scholars. Very few know that the doyen of the Sinhala Theater, Prof. Ediriweera Saracchchandra’s first job was at STC as a teacher. Arisen Ahubudu, the well-known Sinhala Scholar of the Hela-Havula, a language renaissance movement in the fifties under the leadership of Munidasa Kumaratunga was a popular teacher at STC, better known as Mr. Aashuboda. There were a few others from the Hel-Havula movement, such as Sandadas Coparahewa and Ku.Be. Jasauriya (aka Embalm). I am not too sure if Mr. K.N. Jayasinghe was also from the same Hela-Havula tradition. But his mastery of Sinhala, Pali and Sanskrit in addition to English, was superlative. I still remember a Sanskrit ‘sloka’ he recited : “Akrodha maarodha jithendriythvan, dayaakshamaa sarva janapriyathvan….”.

As boys, we were amused by his theatrical style of narrating stories and recital of slokas. What amused us further, at that time, was the fact that he had directed a horror film based on a short story written by SWRD Bandaranayake, called Maha Hene Reeri Yaka (The Bloody Demon of the Great Chena). The film, according to archival records, was released on 22 December 1971.  The cast included Malini Fonseka, Wally Nanayakkara, Piyadasa Gunasekara and Wijeratne Warakagoda. They were all popular actors at that time and later.  The versatile composer, Shelton Premaratne, was the film’s music director. An elder told me that Mr. Jayasinghe was introduced as Sri Nihal Jaysinghe then, however the full name we knew of him was Kithsiri Nihal Jaysasinghe.

Mr. K.N. Jayasinghe’s unique and absolutely mesmerizing personality will remain permanently etched in the memory of the boys at STC. It is hard to forget this rare character we came across in our formative years. Apart from the fond memories we cherish about Mr. Jayasinghe, I also think that there’s an untold story about him that will remain a mystery. That feeling of suspense and doubt would never make us forget this man.

Mr. K.N. Jayasinghe taught my class geography, and I first encountered his style and rather unusual demeanor in 1964, when I was in the Upper 4th form. Personally, he was the very antithesis of sartorial propriety as was adopted by most of the other gentlemen teachers in our time. Mr. Kirthi Jayasinghe was by any measure given to presenting an unkempt exterior with nary a scant regard for the colour of his necktie, the manner of it being knotted and its suitability with the rest of his crumpled accoutrements. Others have already mentioned an ignominious cheroot or unlovely cigar clenched in his jaws.

He also tended to be rather loud in his manner of address in the classroom, and he tended to exact complete submission and obedience of his charges. Not that the mischief makers were dissuaded overmuch. Where there is a will there is usually a way, as we scallywags have figured out. Mr. Jayasinghe adopted a style of speech that demanded an exaggerated delivery in the ‘s’ sound in his speech. e.g. Mapsssssssssss; silenccccccccccccce!

Speaking of which, his method of teaching geography was to give homework assignments which was principally to draw coloured maps and display them in class.  They had to have the customary shape and form of the country or continent, but they also needed to show such features as rainfall, dry and wet zones, mountains, plains and valleys, rivers and lakes, areas of agriculture and industry and also itemize the many details within such criteria and categories.  This was not easy.  For many boys, these were terrifyingly alien things. The maps needed to be shown the master, but the master never quite did ‘instruct’ in how or what the assignment was meant to be.  It would be a blanket request, such as “I want to ssssee a map of the Russian Steppesssssss.”  That was clear only in one aspect, but what was to be included had to be divined; and woe be unto the hapless student if he had not ‘read his mind’ and filled the map with the features and details such as only Mr. Jayasinghe knew and had conjured in his fertile mind!  To miss the target was to be at the receiving end of a vicious diatribe in class.

Mr. Kirthi Jayasinghe was no doubt knowledgeable of Sanskrit slokas and aphorisms. Mention has been made already of his venture into the making of a film.  From all accounts, this was not financially rewarding- rather, it was the absolute opposite, and it is believed that Mr. Jayasinghe was out of pocket and probably egregiously caught in a debt trap for want of runaway popularity in the box-office for his horror movie, which was not quite what the public of the time were eager to discover!

My days in the classroom is sketchy at best for all I wanted to do was play rugby! K.N.J. was fully aware of this and gave me a big margin like the big heart he possessed. Being an old boy himself he was one step ahead of us and executed his teacher authority when required. That all too familiar smirk on his face though hinted of his acknowledgement that boys will be boys and he choose to turn a blind-eye to many of our antics. My memories of STC teachers will always include ‘Dear Pappa’ an unforgettable gentleman with a sharp mind, equally pungent cigar odour and a heart of gold.

A Thomian first , Bishop of Colombo.