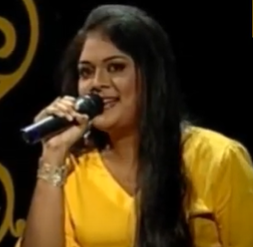 All singers should possess a singing voice with intermittent breathing, the love for music, commitment. patience, determination, and discipline. All these traits are possessed by Piyumi already an acclaimed singer.

Piyumi Pathiraja a native of Makola educated at Mahanama Girls College Kadawatha having excelled as a promising vocalist in school concerts and competitions. Father a retired officer at People’s Bank while mother a housewife could sing a bit.But Piyumi’s singing talent is  owing to innate talent not with any  hereditary affiliations, which is her passion had affirmed her life revolves around as a self-employed singer, performer and a recording artiste having been a permanent member of the ’youth extreme’ and ‘special music’  groups at the National youth Services Centre in Maharagama.Piyumi had travelled to overseas countries with these groups to countries like Russia, Bangladesh,Lebanon and Japan for musical concerts having performed admirably manipulating her innate singing flairs.

To enhance her passion, she had concurrently five years ago had gained admission to the University of Visual and Performing Arts for a bachelor of performing arts in Eastern music which she had completed successfully with a Second Class (Upper Division) Honours last year. The convocation had been held at the Bandaranaike Memorial International Conference Hall in the month of January this year.Piyumi had confessed that was the day as her happiest day, even had quipped that ‘do not ever stop learning ,dreaming and achieving which is the key to success”.

Piyumi is permanent member of Brother Charles’ very popular program ‘Daham Pahana” music group which had been staged in many cities around the island.She is the main female vocalist in the musical group where she had performed admirably hailed by many audiences,She while singing keeps audiences spellbound with a pin drop silence. The writer as a huge fan of the “Daham Pahana” was mesmerized when she sang Sujatha Attanayake’s song “Puthune Me Ahaganna” which she had sung many times the one she sang to a packed open air audience at the Navy show in Welisara was spectacular. At many other programs she sang a duet with Brother Charles  ‘Man Hinda’ the original duet of late legendary singers Gunadasa Kapuge and Malani Bulathsinhala”  should be reminiscenced.

Piyumi was very recently invited by the Principal and the Music teacher at the Hilburn International College in Avissawela to be the Judge at the musical contest “Singing Sensation2022” perhaps knowing well about the expertise of music Piyumi possesses. This was a huge triumph and a significant impetus for her impending music career.

Piyumi  had been invited to showcase her singing talent to a number of television musical programs mostly to the national television. the Sri Lanka Rupavahini Corporation. Independent Television Network, Swarnavahini and other channels. To the SLRC she had been invited four times to the Poya Day program “Daham Padma” where she had to sing “Buddhist” songs.She had been invited to sing in the popular Sunday night program “Sihinayaki Re” twice to which only those who are competent singers are invited.For these two programs the Guests who selected songs were Subhashini Ekanayake and the Chairman of the NYSC Eranda Weliange for which Piyumi sang to the expectations with pride. Piyumi had participated as the female vocalist in the Swarnavahini Tuesday program “Mathra”, the gust who selected songs was Hariguptha Rohanadheera son of famous Mendis Rohanadheera.Also for the Friday’s evening program at Swarnavahini “Raa Padura” she participated to sing also duetting with veteran Asanga Priyamantha Pieris.

Piyumi had been called upon to sing along with stalwarts like Susil Fernando,Dayan Vitharana,Saman Lenin, Walter Fernando ,Keerthi Pasquel for the SLRC program commemorating Legend MS Fernando in the program ‘Nomiyena Minissun Mathaka’.This event was very special to Piyumi to have been able to  sing duets along with many reputed artists.

Piyumi has a few songs of her already recorded with music videos despite her hectic musical schedules. The song ‘Mirigu Nadiye” lyrics by Isuru Sampath and music melody by Prakash Ranasinghe and  music composition by Kasun Anushan.The other song Piyumi recorded was “Ashawe Seya” for which Dilshan Pathirathna had contributed lyrics while music melody and composition was by Nuwan Samarasinghe , both videos are sure to be hits.

In addition Piyumi had done many cover songs successfully acclaimed by many audiences.In the context of the above during the few years in the musical arena Piyumi had accomplished many feats winning the hearts of all audiences.All her fans and followers would wish her more triumphs in  her  future music career which has already blossomed..

The Best of Mr.Bean – eLanka