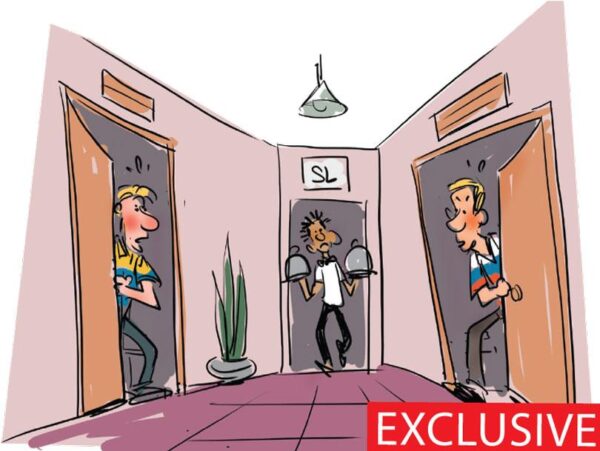 Police and hotels have been told to monitor and stay on alert to avoid any possible incidents among Russian and Ukrainian tourists who are presently in Sri Lanka as most of them are staying in the same hotels or in the same areas after the Tourism Ministry gave them a two month extension of visas.

Due to the ongoing war which has erupted between Russia and Ukraine, several tourists are stranded here and unable to go back home as airports are closed and due to the escalation of violence. According to official statistics, nearly 4,000 Ukrainian tourists and over 10,000 Russian tourists are stranded in Sri Lanka presently, unable to return to their countries.
Ukrainian tourists last week urged the Sri Lankan government for assistance and protested outside the Russian Embassy in Colombo, urging  Russia to stop the war, as several civilians in Ukraine had already been killed.

Yesterday, the Tourism Ministry said that as an immediate assistance, they would extend the visas for tourists from both countries for two months without a charge and hotels had also been requested to extend their stay.

However with the escalation of violence and the growing animosity between the two countries, the Daily Mirror learns that the tourist police and hotels have been told to remain vigilant to avoid any incidents between the groups so that the security and safety of the tourists is ensured.

Although there has been no official request by the guests that they want to stay separately from each other as most are staying in the same hotels, the officials here are however on alert.
Tamil Progressive Alliance Leader and SJB Parliamentarian, Mano Ganeshan also took to Twitter yesterday urging authorities to monitor the Ukrainian and Russian groups and to ensure they do not stay in the same resorts or home stays.

“Without a fee, visa validities have been extended for both Russians and Ukrainians now holidaying in Sri Lanka. Some of our hosts are offering free accommodation to Ukrainians. All reasonable & honourable. But monitor them, both don’t meet each other or stay at same home stays/resorts..!” he tweeted.

The Daily Mirror learns that while there has been a positive response from local citizens to welcome Ukrainian tourists who are stranded here into their homes, it is not however the same for the Russian tourists who are now dependent on the state for their accommodation and well-being.

“THE SOUND OF SILENCE”