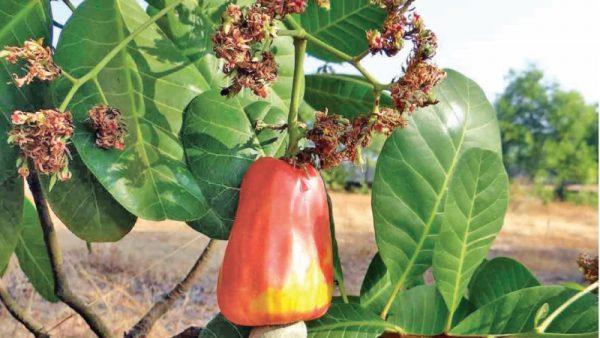 Agriculture is the heart of Sri Lanka, which is playing a critical role in broad-based economic growth, poverty alleviation, and food security. Now-a-days we have realized more than ever before, how the impact that agriculture can pose at both economic and social levels in the county. The agriculture sector of our country contributes about 7.4% to the national GDP. Whereas tea, rubber and coconut-based products are the top three export items so far in the country. Addressing the current scenario of the country, it is consumable that we should also switch to alternative agro-based products in order to achieve higher foreign exchange. In this regard, ‘rich men’s food’, the cashew is one of the top among the other products as there is a great demand in the world.

Cashew was introduced to Sri Lanka by early Portuguese settlers from Brazil in the 16th Century. Cashew cultivation, on the other hand, became popular after Independence, particularly following the establishment of the Sri Lanka Cashew Corporation (SLCC) in 1973. In the 1970s, SLCC initiated successful programmes to promote cultivation and increase production. Along with this interference, many commercial plantations were sprouted creating many employment opportunities, particularly within rural inhabitants. However, today, are we actually in the position where we should, is questionable by means of production and earning foreign currencies.

The worldwide cashew sector has expanded significantly over the last decade, owing to rising cashew kernel consumption. Today, cashews became the third most popular tree nut in the world and accounted for 17% of world tree nut production during 2019 and 2020. In 2019, approximately 3.96 million metric tons of cashew nuts were produced worldwide. Between 2020 and 2025, the raw cashew kernel market is expected to increase at a rate of 4.27% yearly. By 2025, it is estimated to be worth about 7 billion US$. In 2019, Sri Lanka produced 40, 279 metric tons of cashew nuts, which is worth about 15.16 million US$. However, Sri Lanka holds 16th place out of 34 countries that produce cashew nuts. Sri Lanka has not been able to maintain constant growth throughout history. However, as seen in Figure 1, cashew production in the country has improved in recent years.

According to the 2019 statistics, Vietnam (2,598,220 metric tons), India (786,326 metric tons), and Ivory Coast (731,917 metric tons) are the top three nations producing a tremendous amount of cashew nuts. Philippines, Benin, Tanzania, Guinea-Bissau, Mali, Indonesia, Brazil, Mozambique, Burkina Faso, Nigeria, Ghana, and Colombia are the other leading countries ahead of us. The United States is the primary importer of cashew, and Cambodia has the highest per capita consumption. It is clear that the global market for cashew increases rapidly, though the world production is still not sufficient to fill up this requirement.

It is obvious that Sri Lankan production should also be increased to a satisfactory level. The country has great potential to improve cashew production; in particular, the country has enough suitable land to create new plantations. Since, cashew plant can bear a wide range of climatic conditions it grows up in arid (Hambantota), dry (e.g., Anuradhapura, Polonnaruwa, Batticaloa), intermediate (e.g., Kurunegala, Badulla) and wet (e.g., Gampaha, Ratnapura, Kandy, Galle) zones in the country. Nevertheless, it is best to grow up in the dry zone, due to the much favourable climatic and soil conditions. Regardless of this fact, along with the extensive cultivations, Puttalam, Gampaha, Kurunegala and Hambantota are becoming the major cashew producing districts in the island.

There is a huge demand even in the country, though it couldn’t fill up the requirement, also mounting price made barriers to local people to buy the cashew as they wish. The retail price for the cashew is rising yearly and today 1kg for cashew kernel cost Rs. 5,400 to 6,000, which is Rs. 700 to 3,400 higher than the price that of 2018. Nevertheless, the sales prices in other countries such as India, Bangladesh and Tanzania are super cheaper than ours. Sri Lankan cashew has a good reputation in the world, due to the superior quality of the kernel and Middle-East countries, Canada, USA, Israel, and Japan are the countries that favour our products. Therefore, still doors are wider open for Sri Lanka to earn significant foreign exchange by exporting the cashew products despite the higher price.

Cashew as a strategy to mitigate poverty

Rather than growing other crops, planting cashew gives many more benefits. It gives the highest return for a given investment. It is not labour intensive as many other plantations and agricultural crops and not necessary to add costly fertilizers or irrigation systems to maintain the plantation. Therefore, maintenance is much easier even for poverty stressed families. Today, the majority of the cashew is collected from household small-scale growers. Nevertheless, rather than just becoming a grower and selling raw cashew nuts to intermediates, also becoming a processor will be helpful to earn more income.

In Sri Lanka, cashew nuts are processed using a combination of manual and mechanical methods, which means that the natural delicacy of the cashews is preserved and a high proportion of whole nuts is obtained at the same time. At a small scale level the cashew nut processing is carried out by using simple steps as shown in Figure 2; cutting of dried raw cashew nuts (also with manually operated primitive cutting machines), removing the shells manually, roasted kernels in electric ovens and removing the testa. After this point, adding value to the products also popularized in the island.

Where we are lacking

As aforementioned, Sri Lankan cashew is with a high price, which is one of the major barriers to competing with the other countries and even finding more market opportunities even inside the country. Higher labour costs, low efficiency and lack of enough guidance, indigency, lower stage processing techniques, together with low production have created such conditions.

Today, overall cashew production per tree per season is just about 4–5 kg in the country. During the recent past, a slight improvement in cashew production (5–7kg/tree/year) has also been observed particularly in the East coast, one reason could be the started up of new cultivations. However, those values are still far below the potential yield of 10–15kg. Increasing the cashew production together with quality maintenance throughout the process (plug/pick to packets) is important to get good demand and long-term market opportunities.

Unorganised cultivation is very common in the country and keeping low plant densities (not being able to maintain proper spacing) eventually leads to lower productivity per hectare, for the cultivated lands. The cashew trees usually start to bloom after three to five years and reduce their yield between 30 and 35 years of age. Today, many cultivations in the country possess old trees. Replacing those old plantations with new cultivations does not seem to be worked out. The majority of growers are not willing to cut down their old trees and plant new ones, even though they are getting 2-3kg per tree for a season. Poor or low-yielding varieties aggregated the scenario. The plants originated from unknown pedigree stocks or poor quality seeds, resulting in low yield and different sizes of cashew nuts.

Another constraint is the poor cultural practices followed. Well-trained cashew plants can give about 20 kg per season, though maybe due to the unawareness and labour cost, the majority of the growers do not think of pruning the trees and maintaining them accordingly. Poor harvesting and post-harvest practices are the other main constraint, which results in losses of cashew nut production and leads to the poor nutritional quality of kernels. Harvesting of cashew nuts is commonly carried out in Sri Lanka, by picking after the fallen. It is also common to shake branches and careless plugging methods to get the nuts. These practices will be responsible for the fall of immature nuts and thereby reducing the expected yield. Noteworthy is that, cashew has about two months harvesting period and has only one season per year. Therefore, it is supposed to be kept nuts throughout the year, just collected for a limited period.

Several factors influence how long cashew nuts can be stored without any loss of quality. Subjecting cashew nuts for adequate drying using proper techniques is a leading factor among others. Today, many local farmers are drying nuts just by keeping them under the sun, on a mat or any other. Nevertheless, it is advised to use bare floor drying, preferably, clean concrete/cement like hard floors. Excessive sun drying should also be avoided to prevent scorching of nuts and oil-stained kernels. Proper storage is also a critical factor, though many farmers are not concerned much about this. Storing in polypropylene/polythene bags or cardboard boxes are some of the methods followed, which are not appreciated since it creates humid conditions and lower the quality and are also susceptible to disease spread. Thus, the use of clean or new jute bags/ gunny bags is recommended for storing the cashew. It is very common to store packed cashew nuts heaped on floors, which is again not a good practice. Therefore, to avoid direct contact with the floor, wooden pallets can be used. Even if failed to have those, cheaper pallets can be easily made using bamboo sticks or from the Palmyra leaves.

Several good moves in the country are also recognized. Initiating new plantations with better yielding varieties is a good move that the country has made. Also, value addition is another good strategy of the country to attract the consumers and generally, this is done by mixing kernel with salt, chili, and chili plus curry leaves, commercially those are called as; salted cashew, devilled cashew and spicy cashew respectively. Today several more value-added products are available to purchase, decorated by using cheese plus chili, honey, kithul, jaggery and sugar. The businessmen committed several wrongdoings in order to increase their supply. It has been also recorded that businessmen import the cashew from India, which is having larger kernels with less tasty and mixing with local cashews and sold at. In addition, it also found that the private sector used to paste split and broken grades of cashew to present as whole ones. These practices eventually damage the picture of the country’s product and thus, the law has now been enacted requiring private exporters to obtain a clearance certificate from the Cashew Corporation before exporting.

Educating the growers/producers about the pre and post-harvest techniques are seem to be highly required for the island. Yet, an urgent requirement is needed for the country to popularize the high-yielding improved cashew varieties, which are obtained from conventional breeding. Therefore, the drive of growers towards cultivating such plantations should be done, step by step. Also, giving loan facilities to growers to start farm-level processing units could be much beneficial, also directing them to reach the export market could also be ideal. By that it can create competition among the local exporters, which may eventually lead to earning much foreign exchange. Utilizing by-products, the shell to extract the oil (Cashew nut Shell Liquid) is becoming an eye-catching practice in some countries. The extracted oil is used in the manufacture of brake linings, friction dust, resins, paint, laquer, etc., thus finding the new market opportunities led to earn many profits. In addition, finding more foreign markets for cashew apple-based products including sugar syrup, jam, sweet cookies and candy, porridge mix, and sweet cashew pickle will also create opportunities to earn more.

These developments will pave the way for a better future in which Sri Lankan production can be greatly expedited, also by earning more and more foregoing exchange and can overhead the many other export productions in the country.

(The writer is attached to Department of Biosystems Technology, Faculty of Technology, Eastern University, Sri Lanka)