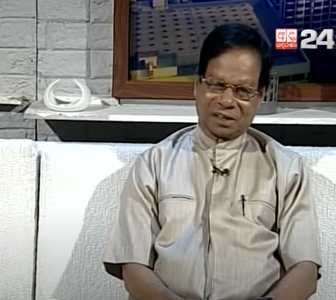 Ayurveda medicine places great emphasis on prevention and encourages the maintenance of health through close attention to balance in one’s life, right thinking, diet, lifestyle, and the use of herbs. Knowledge of Ayurveda enables one to realize how to create this balance of body, mind, and consciousness according to one’s own individual structure and how to make lifestyle fluctuations to bring about and maintain this balance. Each individual has a specific design of vitality—an individual combination of physical, mental, and emotional characteristics—which comprises their own constitution. This constitution is determined at conception by a number of factors and remains the same during one’s life.Like is western medicine in ayurveda treatment stethoscopes, X rays ,blood tests are rampant  in diagnosing deceases

Ayurvedic Dr Gamini Wijesinghe (DIMS; H.P.A) a genius in the field of Ayurvedic medicine an Octogenarian, eighty-one years old had devoted 52 years in his life in learning teaching and treating patients with numerous types of diseases. With the passage of time the experience gained has helped him to diagnose perhaps any type of ailment to satisfy so many patients. The duo are blessed with two sons Sampath and Ravi both qualified in their own selected professions qualified in Melbourne at the RMIT,University, are citizens of Australia.On the insistence of the sons the father mother duo had migrated to Australia five years ago. Although Dr Gamini was very anxious to commence a clinic here, for the benefit of Australians, the opportunity was deprived for the prerequisite of herbal oils and other medicines not available here. After serving in the government sector as a General Grade Medical Officer had been appointed as the Medical Superintendent of the Kurunegala Ayurvedic Hospital and subsequently also  as the Medical Superintendent of the Anuradhapura Ayurvedic Hospital. The obligations, assignments entrusted were safeguarding, maintenance,development of assets and properties of the Institute.Then continuously monitoring inventories, funds administration,monitoring, training motivating staff,institute necessary disciplinary action, implementing meticulous systems and procedures to enhance the efficiency of the institute.The other areas where focus had to be made was to look into the dire needs of the patients.

Dr Wijesinghe in order to find permanent cure for acute diseases had initiated solutions for under mentioned diseases.

Dr Gamini Wijesinghe had received many accolades from many quarters for his services rendered .The main intention of him was to impart his vast knowledge and expertise to juniors as through his knowledge as he was thorough in most areas of Ayurvedic medicine and treatment. Having done research too Dr Wijesinghe had made a number of publications as follows”

1.”Pancha Karma Chikithsa” published by the Department of Ayurveda in 1977

3.”Kaya Chikithsa” Published for the benefit of the general public by Dr Gamini Wijesinghe in year 2006.

4.”Pranajeevani” in year 2016 also by self on invented treatments for “Arthropathi”.”Parkinson’s decease” ,Multiple Sclerosis (MS) Gullian -Barr’e(GBS) and Early Sarcoidosis- the book is now in the fourth publication process owing to the demand for the book.The foreword to the book had been written by Professor Tuley De Silva.

Dr Gamini Wijesinghe for his legendary celebrated Ayurvedic work towards the betterment of the health of the people having three PATENTS for his inventory works.In this perspective Doctor was invited to several media radio and television for many discussions which would educate the masses,The most educative program was in TV Derana when he was invited to a series of health programs “Jeevithayata Idak” where he emphasised deeply on Arthritis ,headaches, Asthma and Parkinson deceases, causes and remedies comprehensively.

When spoke on Headaches Dr Gamini emphasized it could be owing to  various reasons.It could be for motion patterns which are irregular in many.The causes of this could be excess meals ,not consuming much water. life patterns.Should get used to a diet with vegetables and have a simple life not a sophisticated one..He said migraine could be cured by treatment which interferes with anyone’s routine life.Dr laid emphasis that the patient should follow the instructions sternly then he guarantees curing. Headaches too could be owing to high blood pressure, the Dr on discussing the patients symptoms is able to diagnose such ailments with consummate ease..Dr emphasized on Neurofibromatosis are a group of genetic disorders that cause tumours to form on nerve tissue. These tumours can develop anywhere in the nervous system, including the brain, spinal cord, and nerves.

In another “Jeevithayata Idak” TV Derana program the topic discussed was Osteoporosis which is common among many.Dr explained the various types in the knees, vertebra column ,joints via X ray photos early symptoms and advanced stages.Dr laid emphasis that such ailments he could cure if the patients follow his advice and medicines given.He added that neglecting osteoporosis could lead to even cancer.

On another program on “Jeevithayata Idak” Dr spoke on Asthma.The difficulty in the intake of air with less exhaling results in wheezing, which many know is a very regrettable ailment by which many suffer, who’s normal lives are disrupted, This leads to the lungs been affected.It has been reported that digestion is not properly completed,when the undigested food gets formed around the lungs.Dr emphasized the public not to get misled by dubious types of medicines that are advertised for sale for dubious  businessmen also was not in favour of inhaling steam for Asthma patients which usually western medicine recommends, buy he stressed that it would be only a momentary reprieve. It was advised to have a vegetable diet.in small proportions for a healthy living.There is a belief that Ayurvedic treatment takes a longer time for curing, the Dr said it was untrue.but the patient Physician link should be rigid and trusted to bring consistent results.

In another program in TV Derana the “Parkinson decease was discussed..Dr Wijesinghe had boldly admitted he had cured patients with Parkinson decease. Of course not those who had taken ‘Dopamine” medicine..This is a medicine released to the brain to regenerate  dead brain cells. Parkinson decease is caused with the death of certain brain cells.The initial symptoms as explained by Dr Wijesinghe are cannot put the button in the shirt, shivering when holding cup and saucer ,foot shuttering while walking, also ones work is at snails pace…Dr had vouched that he could cure “Parkinson” but would take time for which he was offered a ‘Patent”.by the relevant authorities.

The above could be clearly learnt by viewing the TV Derana program “Jeevithayata Idak” in the you tube which could educate the masses.All would thank Dr Gamini Wijesinghe who explained all during a series of television programs who presented flawlessly by heart sans looking at any paper,that was Dr ‘s knowledge and competency.. All would wish Dr Gamini Wijesinghe good health and longevity. Theruwan Saranai