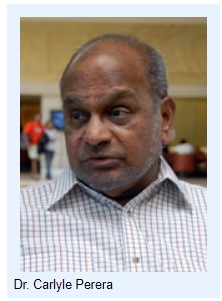 Individual brilliance in any sport does not necessarily make one a leader of men/women. Dr. Carlyle Felician Haig Perera not only had individual brilliance as a cricketer from his early days at St. Joseph’s College Colombo but he also had one other characteristic that is elusive to most and that is charisma. He made ample use of this to steer the Colombo University Cricket team to an unique achievement in 1962/63 when he led them to capture the plum of Sri Lanka Cricket, the Sara Trophy. Never before or since have the Colombo University been able to achieve this historic Milestone.

It all started at St. Joseph’s College Colombo, when Carlyle was drawn to Cricket like a moth to a flame where he showed early signs of leadership captaining the U-14 and U-16 teams. At just 16 plus in 1955 his enormous talent saw him play for the College 1st Eleven under Ralph Brohier and in 1958 Carlyle was entrusted with the captaincy of the College Cricket team. He distinctly remembers how he missed a century against Trinity College being dismissed for 99 and his brother Dr. Travis bowling Eric Roles of Trinity with the last ball of the day to give St. Joseph’s a memorable win. He also vividly remembers his knock of 77 in the Joe-Pete big match of 1957.

The fact that during the season Carlyle scored 3 centuries including one against the star studded S.S.C. team saw his team mates also raise their level of performance and the rest is now history. The one and only occasion that the Colombo University ever won the prestigious Sara Trophy, the pinnacle of Sri Lanka Cricket. Among his team mates were B.G. Reid, Mohanal Fernando, Lareef Idroos, Nihal Gurusinghe, Mano Ponniah, Nihal de Mel, Cyril Earnest, U.R.P. Goonetilleke, Harsha Samarajiva, Kingsley Fernando and Adiel Angie. On paper they were a talented lot and it certainly would have been a travesty, of justice if the Colombo University did not carry away the premier Division Trophy with the capabilities of the team ably led by their charismatic leader Carlyle.

In the words of Dr. B.G. Reid, “Carlyle was the best captain that I ever played under” only one other cricketer comes to mind that being. Arjuna Ranatunga who piloted the Sri Lanka team to the World Cup in 1996, both Arjuna and Carlyle were sheer class as leaders and it’ll be a long long time before Sri Lanka can produce another Carlyle or Arjuna, Certainly National representative honours would have come Carlyle’s way if he did not Migrate to Australia although he did skipper a C.C.A. XI in 1962/63.

While in Australia Carlyle turned out in the Ballarat Division for 1 year and through a number of 50’s saw his club rise right up from the bottom of the table to head of the table. This then is the Saga of Dr. Carlyle Felician Haig Perera, a chief Physicatrist in Melbourne whom we will always remember as someone “who came, saw and conquered” the cricketing turf of Sri Lanka.