BETHMI NIHINSA ON WAY TO PROMINENCE AS A VOCALIST, A BUDDING BIOTECHNOLOGIST - by Sunil Thenabadu
Advertisement 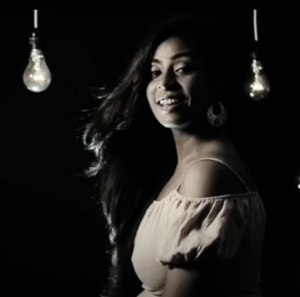 
BETHMI NIHINSA ON WAY TO PROMINENCE AS A VOCALIST, A BUDDING BIOTECHNOLOGIST – by Sunil Thenabadu

A sought after singer or a talented singer should possess a number of characteristics like a good singing voice ,self-confidence, a passion for music, commitment and patience, determination and discipline. All these traits are possessed by young talented singer Bethmi.

Visharada Bethmi Nihinsa Weeratunga born in year 1998, a resident of Wijerama, Gangodawila,Nugegoda is the only daughter in a family consisting of her parents and two younger brothers. Educated at Sujatha Vidyalaya in Nugegoda opted to study a course BSc in Biotechnology at present is a final year student  Malabe Horizon University.

Knowing her aptitude and flair for singing and music she had been sent to be trained under initially to legendary Amitha Wedisinghe and then for her Visharada degree to also famous Sangeetha Visharada music teacher Deepika Priyadarshini Pieris. Bethmi had completed her Visharada examination in year 2017 when she was barely eighteen years. Bethmi has undergone voice training under reputed musician Kasun Kalhara.These had guided her immensely to her singing career which has already blossomed to tall heights.

Bethmi was selected to sing in the gruelling Derana Dream Star season 08 competition. She had done exceptionally well among over one hundred thousand applicants to be selected among the best final seventy five. From the ensuing ‘SMS’ rounds she had been eliminated from the final fifty six which was a great achievement for a novice like Bethmi after receiving reputable observations from the three judge panel.

Since then she had got the opportunity partake to sing in TV ONE channel live program ‘Roba Eve”,also in Charana television program “Art Beat” where novice artistes are invited to showcase their talents.

The first song recorded by her was a video production which happened in strange circumstances when her father’s friend Jayanthi Mala Perera had suggested her to sing a original song after seen her performances in Derana Dream Star competition in year 2019.

The lyrics were appropriately penned  by Jayanthimala Perera while the music melody for the song was by Lahiru Perera while music was directed by Thiisal Randunu. All expenses were borne by Tharanga Weerawardena another friend of her father Prasanna Weerathunga. The song was titled as “Sanda Pahana Men” for which Bethmi has extended her highest gratitude to all who helped her to release the song video which was a morale booster for her future music career.

The next two songs recorded had been completely different to the first as Bethmi does not like to get secluded to one frame .Then as the next song thought of recording a ‘baila’ type song the lyrics was by another friend of her father which was sure to become trending. The lyrics of the song was by a talented lyricist Lakmal Fernando which was sung as duet with a friend of her brother the music melody and composition was by a gifted young musician Maleesha Dakshina.This song titled  “Adara mage bari” which could be viewed and heard on her you tube page named “Bethmi Nihinsa”.Bethmi firmly believes that these two songs would change her future in her journey to become a renowned vocalist.

The third song of Bethmi was commenced in June 2019 barely after one year since recording her first song which was delayed owing to the pandemonium that existed in the environment owing to the Covid-19 epidemic. The lyrics of this song was by Chirath Seniya Siriwardena a young promising lyricist the music melody too was of a gifted youngster Akila Buweneka while the music direction was by another talented musician Mahiru Senaratne, Bethmi is confident that her new song would be accepted by the music loving masses. The title was named as “Ekthara Premayak”is a very beautiful song according the Bethmi. She believes this song would make her name in the musical arena. In this backdrop and scenario she hopes to devote time for music of course giving preference to her education in obtaining a BSc degree in Biotechnology and pursue a career in judiciary vocation while she would engage in music only as a passion.