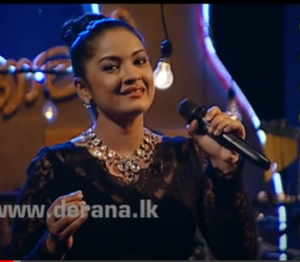 Indika Upamali  is the well renowned singer, composer, director and a senior lecturer in the university of Visual and Performing Arts. Indika is a household name in singing circles  locally and Internationally. She is perhaps the most competent in the music field as a singer having  learnt Opera music under her Guru Deshamanya Kala Keerthi Dr Premasiri Khemadasa better known as “Khemadasa Master”. Master had explored various styles of music from around the world had successfully revolutionized  developing a unique style of music the ”Opera” music combining Sinhala folk tunes, hindustani, western and other streams of music to make compositions of a unique style adapting them to fit into more precisely to contemporary music. Opera is  form of art that relates a story through music and singing sans using microphones used to amplify the voices. Indika had vehemently conveyed that it was her ‘Guru’  Khemadasa who transformed her singing style commenced over three decades ago. Indika had precisely had experimented on her own with Guru’s inimitable style after his demise which had made her so wealthy in vocalizing. Another vital area was philosophy in vocal pedagogy which is the study of art and science of voice instruction used for defining what singing techniques are.

Indika of course had sung many songs before learning the opera style but she had affirmed that it was Guru Khemadasa who made her to be in the position she is now in at the pinnacle of fame. Through the expertise learnt Indika was able to establish her school of music “Artsoundacademy” which is fully fledged music academy catering to all ages young and old too. The widespread areas of music covered extends from voice training, feel free with singing, warm up in correct posture, strengthening exercises, abbess exercises for breathing, yoga pranayama, diaphragmatic breathing with body movements and dancing. There are classes for beginners and for elders too. All classes are held via ‘zoom’ technology.in addition Indika’s school of music is invigorated to teach playing of musical instruments like the Guitar, Tabla, Violin, Viola, Western flute, Keyboard, development and growth of personality which contains a full compendium.

At a recent interview Indika had on national television SLRC spoke on various areas in music where we stand now, was furious on many matters. As was confessed by Guru Khemadasa she too agrees one hundred percent that Sri Lankan music is still in the ancient gone by stone era. She was totally against the formats of the reality shows conducted by many television channels which does more harm than any good. Males’ sings females’ songs and vice versa. listeners are puzzled as to by which gender the songs are sung. Indika this is very uncompromising for injuring the lyrics of the songs which hurt the lyricists. She was also furious the manner songs were sung at outdoor concerts predominantly for the ‘legs’ of the audiences sans any clarity. At this interview Indika  boldly said this as she has the authority as the senior lecturer and head of department in applied music, consisting of contemporary and folk music.

Indika had expressed concern for many had undergone  during the second Covid-19 lockdown in mid 2020.She too had been baffled during the first few days living with her five year old son and husband at home which was not the routine. This period as many had grieved was a test for many who were used to a very eventful life to relax and to think of planning strategies for the forthcoming periods. Indika has had to attend to domestic work and more importantly to train her son in his Montessori work. She had affirmed that it was silly for the son’s teachers to ask him to follow ‘zoom’ classes which the child had hated, Indika was furious on this issue as for a five year old he must only be trained to be disciplined as thought in developed countries. Here too our motherland has failed miserably. Indika quipped that her duties were fulfilled in spite of the lockdown in conducting  “zoom” classes and ‘online’ lecturing to her  students for which she was occupied until midnight daily. During this period she had confronted with a deep dilemma as her university students used to message her asking when the campus would begin having a massive uncertainty about their future. Indika on her own initiative had discussed this with a number of senior professors with whose guidance some ‘zoom’ sermons were steered for which Professor Praneeth Abeysundara and film star, lyrisict, actor and academic Jackson Anthony had provided resolutions ,the former on the theme, ’life devoted to art” and the latter on” cinema and philosophy” on ‘zoom’ technology which had been keenly watched by not only by students in other departments of her university but by many other students in other universities when the word was spread. It had convinced Indika as it was a huge feather in her cap for her endeavor.

In the case of Indika with her Opera style singing it has been talked that when  the majority of singers sing the voices vanishes into the air while when Indika sings with her trained ‘Opera” style vocalizing the voice get embedded in the bottom of the hearts of listeners which is her distinctive characteristic.

At the beginning of her music career begun in year 1989 she had got the opportunity to sing at concerts, functions etc, with maturity she had been called upon to sing in films in addition the opportunity to record her own songs. She had sung in films as a playback singer in “Sulang Kirilli ( 2003),”Adaraneeya Wassanaya (2004),”Kanyavi” ( 2009) ,” Prathiroo “ ( 2012), “Yathra and Sangili films in year 2019.Indika had won Sumathi Awards for films “Kelimadala” in 2007, “Daskon” in 2016 and tele drama “See Raye” in year 2018.Indika with her senior lecturer’s role in the university and her involvement with her school of music “Artsoundacademy” , devoting to family does not permit her to sing in films and teledramas of course on invitation she accepts invitations to sing in concerts.

Indika had been assisted with music compositions by legends like Dr Rohana Weerasinghe,Kasun Kalhara,Chital Chity Somapala, Aruna Gunawardena and Indika herself etc.

Another popular music video of Indika is “Achchita Hal Garana nisa” a solo sing by her to the lyrics of Kumara Hettiarachchi ,music video of Thisara Imbulana films,produced and mastered by Lahiru Costa.”Onna’ was another solo by Indika to the music melody and composition of Kasun Kalhara.”Mama Dankarai” a duet with Chitral Chity Somapala to the lyrics of Asoka Handagama, the music melody and composition of Chitral Chity Somapala.Another solo music video is :Dara Mahamera” lyrics by Dinusha Vidanagamarachchi to the music score and melody of genius Samantha Perera.

The song “Raa Madiama mathwu thotiya” has been a huge hit mostly loved by males according to Indika, the lyrics written by Rajee Wasantha Welgama  to the music of Aruna Gunawardena is very popular .Indika had reiterated that it was the amazing lyrics of Rajee which made the song so popular. Another song video that was acclaimed was “Me Premaya Amuthui” lyrics by Samatha Bandara to the music melody of Dharshana Wickremathunga.

The above are only a few illustrations on songs recorded mostly with videos by Indika Upamali in the past. There are many others that  not been included in this restricted article made to my BLOG www.info-rain.com which was contemplated in writing by the writer since commencing the BLOG. Following the footsteps of Guru Khemadasa to whom she is deeply indebted it is the fervent hope of all her fans and followers that she would get enough vigor to march on in the same vein to delight listeners.

BETHMI NIHINSA ON WAY TO PROMINENCE AS A VOCALIST, A BUDDING BIOTECHNOLOGIST – by Sunil Thenabadu