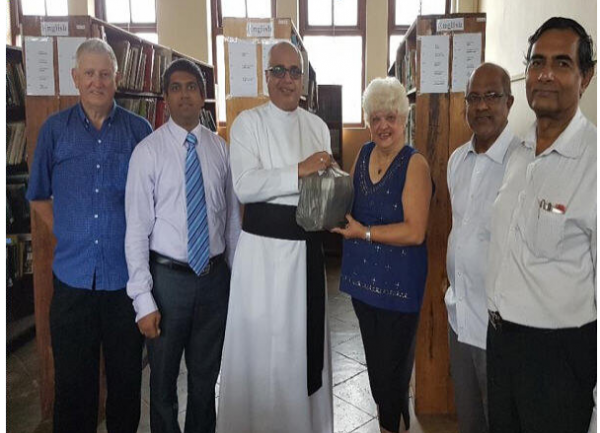 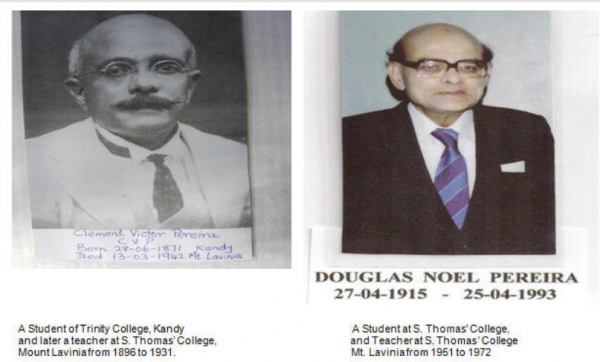 I am Corinne King (neé Pereira) – the daughter of the late Douglas Noel Pereira – a dedicated teacher of S. Thomas’ College, Mount Lavinia from 1951 to 1972. Also, known as Mr D.N. Pereira – (Douglas Noel), (D.N.P.), (D.N.) or otherwise known as “Bulto” to the many hundreds of students he taught during his long teaching career.

Dad was known as “Bulto” a nickname he received at STC in the early 1950’s – around 1953/1954 when as a light smoker he decided to take to sucking the black and white striped lolly called “Bulto”! This nickname stayed with him throughout his entire teaching career at STC.

My Dad – Douglas was a son of C.V. Pereira – A Scholar & Writer of Latin Textbooks. C.V. Pereira along with Warden Stone wrote a Latin Text book that was used at St. Thomas’College in the 1920’s and 1930’s. These learned skills were instilled into my Dad by his father – C.V. Pereira.

I am proud to be the Grand daughter of the late C.V. Pereira – a former student, scholar & “Lion” of Trinity College Kandy and teacher at S. Thomas’ College Mutwal & Mt. Lavinia from 1896 to 1931. My Grandfather was also known as C.V.P or “Soapa”. A nickname he derived during his time as a teacher because he used soap to twirl the ends of his moustache!

A planned “mission” of sheer dedication & true love was to donate valuable books used by my Grandfather the late C.V. Pereira and my Dad the late D.N. Pereira to S. Thomas’ College, Mount Lavinia – an institution that they both venerated and loved beyond words could ever describe. They both lived & breathed the Thomian air to such an extent that their values of teaching & educating the young students that passed through their hands were of paramount interest in their lives as dedicated teachers.

My Grandfather – C.V. Pereira – was a strict disciplinarian who as a student excelled in Ancient Greek, Latin, English & English Literature. He was a personal friend of the English Scholars & Pioneers that were associated with S. Thomas’ College in the early 1900’s – one of them being Warden Stone.

My Dad – D.N. Pereira was nurtured in this background and was guided by his father to be a Scholar & Teacher of the Classics too. Dad or D.N.P. accepted the strict upbringing he had from his father who was sought by many parents of students at S. Thomas’ College to tutor their sons in the early 1900’s.

I am aware of these facts because as a young child I was constantly drawn into the realms of my Dad’s anecdotes and love of his Alma Mater and I was, as an only child, instilled into the “Thomian way of life” and being a daughter, my Dad not being blessed with a son; I was the “sponge” that listened to many a tale my Dad related about his Father and the lessons that were taught, and the boys that came through their learning years and the teaching years that both C.V.Pereira and D.N.Pereira enjoyed in their tenure years at S. Thomas’ College.

Consequently, I had a huge problem on my hands when my husband Ian & I sorted out the contents of my parents’ home in 2016 – we were aware that my Dad had approximately 5 bookcases of books in his office “floor to ceiling” – but when we investigated the shed at the back of the garage – we nearly flipped as we found 100’s more books still in boxes, intact since we had migrated to Melbourne 46 years ago!

This proved a huge problem to me as I sat and systematically categorized the books that should be kept for donating & shipping over to the 2 main Colleges of interest – Trinity College, Kandy which was the College my Grandfather C.V. Pereira was a student at until 1889 and S. Thomas’ College, Mt. Lavinia. There were his Prize Books in leather-bound jackets and in pristine condition from 1883 to1889. There were books he had used as a student at Trinity College and the oldest book was a Greek to English Lexicon (Dictionary) which was a 1st publication dated 1859 (now with the Curator of the STC Museum – Mr Jan Prins) These books and many more Dictionaries – Latin to English Dictionaries & Poetry & Prose – Works of Shakespeare, Wordsworth, The History of England and the list went on and on!

With great deliberation and planning we decided that we will make the trip to Sri Lanka for many varied reasons and with this thought now confirmed, I started to correspond with the Warden of S. Thomas’ College – Rev’d Marc Billimoria and a Member of the Board of Governors,

Mr Milinda Hettiarachchi, to seek a word of acceptance, if books from the “esteemed libraries” of my Grandfather and my Father would be accepted at the College for keeping in the “Archival” & “Museum” Cabinets respectively.

After a few emails that flowed “to and fro” – the final acceptance arrived in an email and I was ecstatic that I had achieved a goal that had been quite a burden on my shoulders ever since my Father passed away in 1993.

We left Melbourne on November 29th 2017 flying direct to Colombo with Sri Lankan Airlines – a flight of 10 hours’ duration which we found most favourable in many ways with the service, food and beverages offered to all passengers.

The morning of December 1st 2017 was a day my husband Ian & I awaited eagerly to dawn for the important “mission” we had undertaken to be realized for the donation of my Grandfather’s and Father’s books was arranged to take place in the Main Library and those attending were; The Warden of S. Thomas’ College, the Rev’d Marc Billimoria, the Sub Warden, Mr Asanka Perera, a Member of the Board of Governors, Mr Milinda Hettiarachchi, the Curator of the Museum of the College, Jan Prins and the Head Prefect of the College, Sebastian Sansoni.

We met with all the above Gentlemen and I handed over the books that were relevant to be placed in the Archival section of the College Library. The Warden accepted the donation of priceless books with great appreciation. I then handed over another collection of books to the Curator of the Museum Jan Prins who kindly and enthusiastically accepted the donation of books for the Museum of the College. 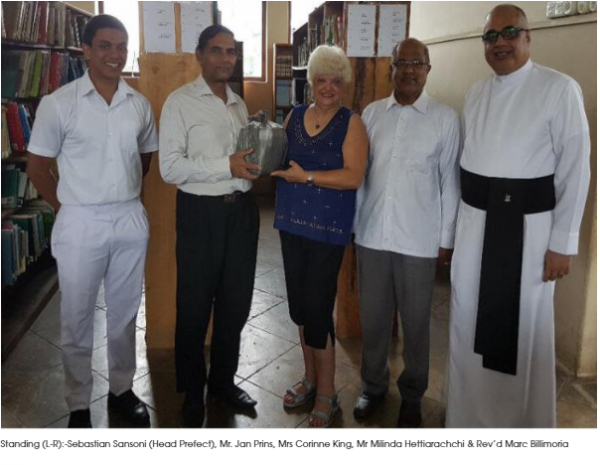 Once these two donations were made I was overwhelmed with a feeling of great satisfaction and inner peace. I had the feeling that my Grandfather & Father had patted me on my back and said “A job well executed and well done for all your efforts”!

Mind you when I did start out to get the entire plan on the table I was very skeptical as to if I was going to be doing the right thing – but then again I felt that the books needed to go back to where they belonged and now that is where they are resting forever! 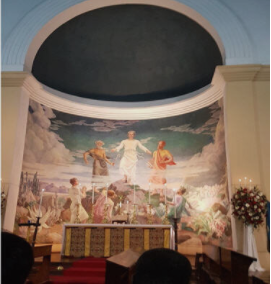 Dad had all his plans “thwarted” as a “little person” decided to make her way down her Mum’s “birth canal on Sunday 7th December 1947 & consequently Mum had to be rushed to the Matara Hospital to Dr.Jude Conderlag who was eagerly awaiting to perform the delivery, but that “little person” didn’t actually make her appearance till the afternoon on 8th December 1947!  Hence my Dad missed out on attending this “special” event for St. Thomas’ College Mount Lavinia on 7th December 1947! 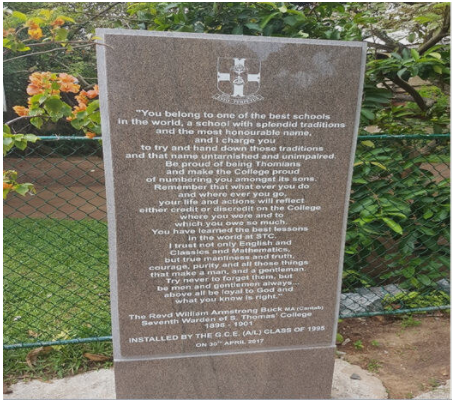 In concluding I would like to include in this article the grave plaque of my dear parents now as per the kindly request of Rev’d Marc Billimoria when I mentioned to him on Dec 1st in the College Library that my Dad had the “Thomian Crest” on his grave plaque – hence the “Grave Plaque” of my parents herewith included.

When my father – Douglas Noel Pereira passed away on 25th April 1993 – the grave plaque was made for his “lawn grave” and incorporated the Thomian Crest on the right-hand side of the plaque.

Poetry in motion with more Teacher dedications by David Sansoni