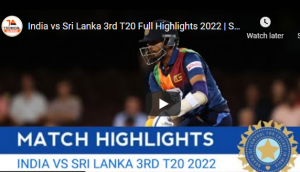 The old adage about catches winning matches couldn’t be better exemplified than by the butter-fingered Sri Lankan cricket team, who squandered at least a consolation win in Game 2 and were whitewashed by India.

Dropped catches, sloppy fielding and questionable placement cost them the second game that would have been there for the taking with a smarter strategy.

Fresh from a trouncing in Australia, the young Sri Lanka squad received a baptism of fire as they had to hurriedly readjust to Subcontinental conditions in a tight schedule that could be classified as unfair.

The experience of handling bouncy wickets in Australia, which makes it difficult for the best batsmen in the world, definitely did not get better as the young Lankans took on the might of another lethal bowling attack in world cricket.

India was quick to claim ascendency in Game 1, smashing the Lankan attack missing two key bowlers to rack up 199, which was always going to be a tough ask.

Sri Lanka’s brittle batting had no hope when Pathum Nissanka, prolific run-scorer in Australia, was dismissed with the first ball in unfortunate circumstances.

The rest offered little resistance apart from skipper Dasun Shanaka, whose bludgeoning lone role gave them a semblance of respectability in a convincing defeat.

Their second effort was much better with the bat thanks to Nissanka and Shanaka, who steered them to what seemed a winning total.

Sadly it was not to be thanks to some sloppy fielding and erratic bowling without strike bowlers Wanindu Hasaranga and Maheesh Theekshana, who did not make the tour.

With the World Cup looming in October in Australia, Sri Lanka’s focus should be on improving their fielding and finding the right combination in their batting, two aspects that are of great concern.

There is a definite indication that the balance of talent and experience appears to be their biggest challenge apart from installing a coach in a hurry who can help get the balance right.

They must be questioning the timing of letting Mickey Arthur go when he seemed to be steering the team in the right direction.

Whatever happens in their qualifying rounds, there is a strong indication that the talented Lankans, much like the West Indians, don’t belong where they sit in the world game at the moment.

Expect the unexpected if they make the cut for the World Cup.