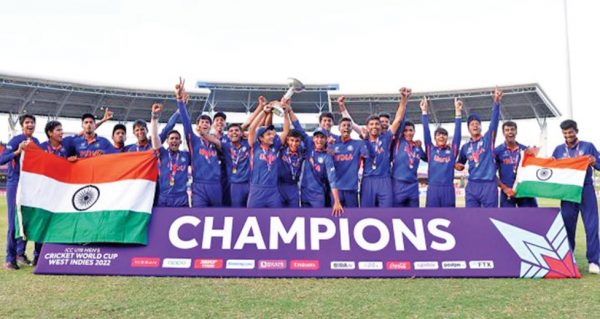 Sri Lanka skipper Dunith Wellalage and South African Dewald Bervis came on top of the bowling and batting in the under 19 world cup cricket tournament which successfully concluded in West Indies on Saturday.

Wellalage the leg spinner was the highest wicket taker with 17 wickets in six matches with best figures 5 for 27 against Scotland while he took his second consecutive five wicket haul (5 for 28) against Australia. In fact he was the only bowler to take two five wicket hauls in this tournament. He was able to take 3 wickets each against Afghanistan and South African matches while only against Pakistan he finished with wickets-less given away 72 runs in his ten over spell.

Wellalage bowled 55 overs during his six matches with three maidens and given away 231 runs finally collected 17 wickets with an average of 13.58. He was able to finish superb all round performance with scoring 264 runs with a century (113) against South Africa and he was overall best seven batter of this tournament having scored 264 with an average of 44.00 and strike rate 70.40. South African number three right hander Dewald Bervis had a superb tournament with scoring highest 506 runs in six matches with an average of 84.33 (strike rate 90.19). He has scored two centuries and three half centuries to come on top of the batters while he was capturing 7 wickets with his leg spin finally adjudged as Player of the Tournament.

Indian Raj Bawa was the highest individual scorer with 162 not out against Uganda while Scotland leg spinner Jamie Cairns had best bowling figures with 6 for 24 against Uganda. India led by all rounder Yash Dhull emerged world champions when they beat England by 4 wickets at the final. They also had a record of highest team total 405 for 5 wickets against Uganda in this tournament

This time Sri Lanka had to satisfy with sixth place at this tournament and their last game fifth place decider lost to Pakistan by 238 runs. Sri Lanka finished with an unbeaten in Group D beat Scotland, Australia and West Indies was unfortunately lost to Afghanistan at the quarter-final in their low scoring game.

However they beat South Africa in their play off semi final while skipper Wellalage was the match hero with a superb knock of 113. In addition Wellalage and Ranuda Somaratne who scored 57 not out making 130 runs fifth wicket stand which was the highest fifth wicket stand in this tournament. In fact Wellalage was able to win three Man of the Match awards against Scotland, Australia and South Africa matches.

Pakistan skipper Qasim Akram also highlighted in this tournament and created history to score a century and five wicket haul in a match against Sri Lanka and that achievement was the first by a player to do in this 14 edition Word Cup history.

“FACTS OF LIFE” – by Des Kelly

Bill Forbes – Believe in me