The Legendary Basketball Coach Ram Sunderalingam Is No More
Advertisement 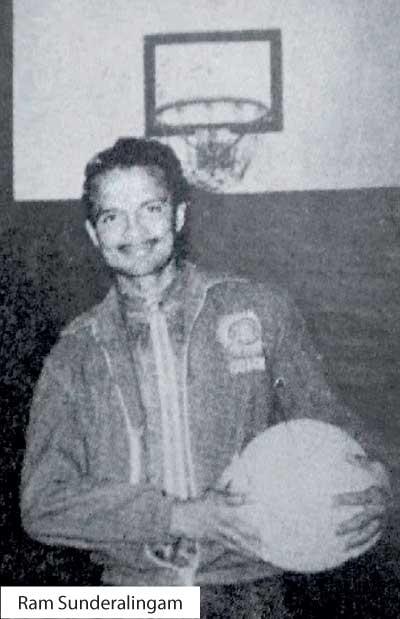 The Benedictine teacher, trainer and coach passed away on February 16 in London at a ripe age of 90. Francis D’Almeida, a student of his in tribute, traces the colourful and compelling life of ‘Coach Sunda’.

The Centenary Benedictine Magazine of 1965 portrays Mr. Ram Sunderalingam thus; “He was both a catalyst and a prophet of Benedictine Basketball because he imbued new life and enthusiasm in his charges (that) completely changed the conception of the game and also because he was so far ahead in his teaching methods and his team responded as never before”.

A friendly and simple person this coach preferred being addressed simply as SUNDA, and that endearing name endured for years to come.

Coach Sunda was born in Jaffna and received his secondary education at Jaffna Central College where he excelled in Athletics, Soccer and in Cricket which team he went on to captain. After a brilliant span in the College, he entered Madras University to earn a degree in humanities. There, he not only captained the athletic team but went on to establish an All India Inter – University High Jump record.

He followed a complete course at the YMCA College of Physical Education in Madras, before returning to the island in the mid 50’s. He joined the academic staff of St. Benedict’s College which institution he served with unceasing passion till his retirement. Apart from taking classes in the Tamil Middle Section, he was also appointed as an Assistant Basketball Coach under Mr. Brian J. Assey who himself had followed a similar path in academics and sports. Mr. Assey is credited with the honour of introducing Basketball at St. Benedict’s and moreover making the College emerge as undisputable champions in Hockey for decades.

In the meanwhile Coach Sunda represented Ceylon in the international tournament pitted against the Pakistan Basketball team. Thus, he himself gained a first-hand international experience as a basketball player. Under fortuitous circumstances Sunda together with a few selected coaches travelled to several East European countries to follow advanced Basketball coaching programmes in the late 1950’s made possible by Mr. James Sarangapani (himself an old Ben) the then President of the Basketball Federation. Of all the coaches both men and women who followed the course, Ram Sunderalingam seemed to have gained most. Soon, he was appointed the chief coach of the Benedictine Cager squad and the impact of his involvement was dramatic.

The Benedictine Centenary Magazine of 1965 throws more light on the extraordinary coaching ability of Coach Sunda thus; “Basketball technique didn’t seem plain gimmick any more. Every move had an avowed purpose based on sound reason. His training schedule was tight, attuned to the abilities of his men. Sunda knew not only how the Bens played, he knew the strength and weaknesses of teams they would be against as well. He was the ideal coach and the result showed.”

“A lesser known role of Mr. Ram Sunderalingam was his involvement with “Radio Ceylon” where he conducted weekly (Sundays) children’s programmes that became popular in Ceylon and in India”

Soon the Benedictine Cagers both in the Junior and Senior categories became unbeatable champs for four consecutive years (1958 – 1962) despite opposition from formidable teams moulded by equally capable coaches in many other colleges. It is noteworthy that during this golden era St. Benedict’s College with the Soccer team coached by Mr. Albert Fernando (West Germany/Brazil trained) emerged as unstoppable champs repeatedly. This admirable story repeated itself in Hockey under the guidance of Brian Assey well supported by the Indian Lassalian Rev. Bro. Mathias F.S.C. The Benedictine Gymnastic team too trained by Mr. George Aitkeson became the ‘ pride of Ceylon’ gaining the adulation of the visiting Chinese premier Zhou Enlai.

Coach Sunda went the extra-mile by establishing the Old Bens Basketball Club and further strengthening the squad by organizing his own Pioneer Shield Tournaments. Soon the Benedictine Cagers began to play a dominant role in the National Team by taking four key slots in the squad which included the Old Bens Cosmos, Percy, Shelton Piertersz and Vijaya Silva to represent Ceylon in the Asian Quadrangular Tournament in Pakistan. It’s no wonder then that the Old Bens dominated the Western Province Basketball scene winning the Exter Shield, Pioneer Cup and Cammack Cup tournaments repeatedly. History was made when the College team met the Old Bens in the Exter Shield Finals in the mid 60’s.
Whether ‘Young or Old’ the Benedictine Cagers’ creative skills had a magical flair capable of mesmerizing fans of all shades.

Mr. Ram Sunderalingam’s obsession to promote the game went beyond the perimeteres of the College. He founded the Mini-Basketball segment in Ceylon for under 12 children with modified equipment and rules. A mini court was built at St. Benedict’s College where he organized several exhibition games. His tireless efforts paid off. The Mini Basketball concept spread far and wide in the island with his catchy slogan , “catch ‘em young and train them right”. To promote such efforts, he started a Basketball journal titled “Jump Ball”.

Simultaneously he initiated the game at St. Lucia’s College, Kotahena and thereafter at Good Shepherd Convent, Kotahena who later under his fond disciple – coach set record-breaking mile stones in Girls Basketball history.
In the early 1970’s the newly formed Mercantile Association obtained Coach Sunda’s services to conduct a three month weekend training course for coaches. This endeavour brought about a qualitative transformation in the game owing to the emergence of capable coaches.

In the administrative sphere Coach Sunda was involved in the inauguration of the Public Schools Basketball Association chaired by Rev. Fr. Peter Pillai – Rector, St. Joseph’s College (Old Benedictine of world fame). Mr. Sunderalingam served as the Secretary of the Ceylon (Sri Lanka) Schools Basketball Association which organized regular tournaments and put together the combined schools’ squad for Indo-Sri Lanka tournaments as well as for senior and junior nationals.

He, on several occasions was appointed as the coach of the Sri Lanka Schools team as well as the National Men’s squad. Being recognized as a FIBA referee, he conducted regular ‘clinics’ to train referees to ensure greater ability in controlling key matches.

A lesser known role of Mr. Ram Sunderalingam was his involvement with “Radio Ceylon” where he conducted weekly (Sundays) children’s programmes that became popular in Ceylon and in India. He was, in addition a talented producer of Tamil dramas and even periodically teaming up with Indian actors of repute.
In early 1980’s he left the shores of the island to be cared for by his daughter in London, where he has chosen to spend the evening of his life. There he has much space and time to recall the richness of his earlier life in a mood of thanksgiving.

One might ask the pertinent question, what is it that has made Coach Ram Sunderalingam’s life so unique and memorable ? Undoubtedly , it is his charisma enriched with simplicity, humour, competencies and above all an overwhelming passion to mould others to perfection.

Even as we ponder upon the demise of someone whom we love and respect, the mystery of the most common yet the most mysterious reality of death starkly emerges. However, it is this very death that makes our lives so precious. Indeed Coach Sunderalingam’s life stood out as valuable and precious.
Let me on behalf of the local and global Benedictine Community bid farewell to our beloved Guru thus;