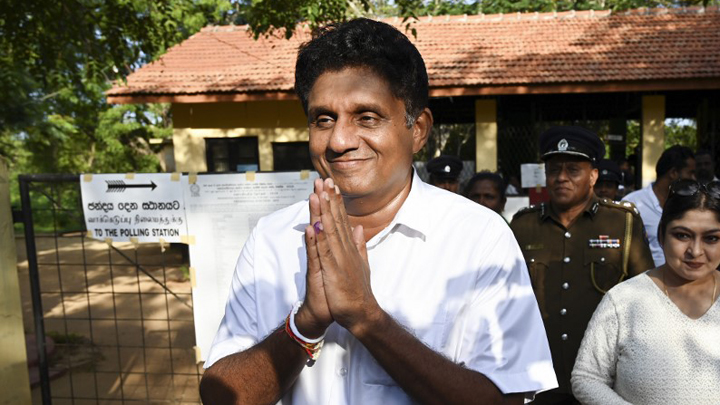 ECONOMYNEXT – With a widely speculated return of Sri Lanka’s former prime minister Ranil Wickremesinghe said to be hours away, opposition leader Sajith Premadasa wrote to President Gotabaya Rajapaksa Thursday (12) afternoon expressing his willingness to take up the position on four conditions including the president’s resignation during a specified time period.

Referring to a previous telephone conversation between him and Rajapaksa where the latter had asked him to accept the premiership, Premadasa said as the leader of the main opposition Samagi Jana Balavegaya (SJB), he is ready to take him up on his offer on the following conditions:

“My team and I have a clear and effective programme to introduce such constitutional reforms and to manage the crashing economy,” said Premadsa in the letter.

1 of 2: We have communicated to Pres @GotabayaR the official position of @sjbsrilanka and our alliance. Will take Government under conditions as per his address to #SriLanka yesterday: 1. Agree on timeframe to leave the office of President. 2. Implement 19A immediately —> pic.twitter.com/wRiegPQlkt

Premadasa’s deceleration of intent comes after days of refusal to form a new government under President Gotabaya Rajapaksa. Until Thursday morning, SJB spokesmen were clear that neither the party nor the party leader wishes to work under a Rajapaksa presidency given that the people’s demand is for the president to step down immediately.

Asked if his stance has softened ever since the speculation on Wickremesinghe, Premadasa told a reporter: “You can read the letter and see for yourself if it has softened or not.”

Similar sentiments have been expressed by the opposition National People’s Power (NPP), led by the Janatha Vimukthi Peramuna (SLPP).