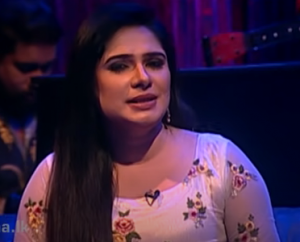 The characteristics needed for a renowned singer are a good singing voice,self confidence, passion  for music, commitment . patience, determination, discipline which are all possessed in abundance by Sewwandi  Ranathunge. Though not sung many songs is a household name among all Sri Lankans locally and internationally who follow music. Her Father is late Wijeratne Ranathunga the leading exponent of Tabla a composer and senior lecturer in music while mother is vocalist Visharada Nirmala Ranathunga hailing from a widely renowned musical family in Sri Lanka.Her eldest sister is Malkanthi Peiris married to renowned singer the present chancellor of Visual and Performing Arts university Sangeeth Nipun Sanath Nandasiri.Her younger sister is celebrated vocalist Niranjala Sarojini married to late Abeywardena Balasooriya, while her younger brother is the famous musician, conductor of music ,table maestro Visharada Manoj Pieris. One younger sister Sakuntala  is a teledrama actress while a younger brother Kumar is a reputed painter.

In this context music to Sewwandi is through hereditary affiliations which she attributes to more of innate talent, hence both factors have influenced her to become a star at very young age.Sewwandi is one of the simplest personalities one would categorize as she is very kind hearted is  down to earth very unassuming artiste with immense talent.Sewwandi had affirmed that she likes to make others pleased over her own contentment. She had been longing to become an Ayurvedic doctor with sole intention to practice in remote areas to treat poor people.But her parents though did not push her to be a musician have had perceptiveness for her to be a musician and vocalist.

Sewwandi has affirmed that she sings with her competency  with  the subject of music well learnt ,as everyone knows her journey emulating her mother had begun when she was barely thirteen years old.One lyricist Ratmale Bandula Gunawardena had been a close family comrade had known the attachment between Sewwandi and her mother Nirmala.To comply with the request of father Wijeratne Ranathunga he had compiled the lyrics appropriately to the song “Hina Mal Podak” which was recorded in a video as a duet with mother Nirmala to the music melody and composition of father .This song is very popular even today which Sewwandi sings at many musical concerts as a solo song.

Sewwandi was educated at Musaeus College Colombo 7 where she had sung at various functions and concerts.She believes when one is born though many say ‘come with nothing leave with nothing” brings along  innate expertise on a particular talent which need to be exploited .The music path of Sewwandi is at obviously at snail’s pace with no panic.She had confessed that she knows well her strengths and weaknesses hence she never undertakes what is beyond her comfort zone.Though she had recorded with videos a few songs it is she and cousin sister Anuradha Nandasiri who have been permitted to sing songs of Aunty Niranjala Sarojini as she as a principle and respect to late husband Abeywardena Balasooriya abstains from singing.In this scenario she sings at concerts and other television programs where Niranjala is invited to.In this custom she had participated in many local and overseas concerts too.It is relevant to mention that Sewwandi is so competent in her ability to sing she could sing sols or duets of other artistes even males efforlessly. Recently paying tribute to late Legendary musician Lakshman Wijesekera she duetted with mother Nirmala to sing the male version of song “Oba Mata Tharuwaki” at Hiru TV ‘Shadow’ program.Sewwandi had been consistently invited to sing in many outdoor concerts to the music of numerous bands  v.i.z.,Flashback.Arrow Star,Marians,Full Blast, Piliyandala Flash,Sampath Live, Silver Flash and many others where with her broad knowledge in music she was able to navigate easily with any band where capabilities vary.

Sewwandi is blessed with a son and a daughter both with hereditary affiliations and innate talent are music minded but she says there do not like to emulate her as singers but have chosen diverse fields which the duo intend to persue.For their wishes Sewwandi does not like to stand against as when she was young when her parents had never forced anything on her.During the time of the lockdowns she had found a bit of time giving priority to home issues in exploring some new songs with melodies she is comfortable with as she is one person who performs within her ranges instead of deviating too much from her characteristic ability.

Sewwandi is often called to sing in all television channels for which she somehow finds  time.Recently she sang along with Amila Nadeeshani in Swarnavahini ‘Raa Padura’ a number of songs paying tribute to late Visharada Neela Wickremasinghe.At intervals she accepts invitations to all chat programs in vivid television channels.Very recently she sang in TV Derana “Ma Novena Mama’ where she had to sing her favourite songs of other singers.Also She participated in Siyatha television program “Siyathahimani” to commemorate 74th Independence along with stalwarts Ishak Beg,Supriya Abeysekera, Janaka Wickremasinghe etc.In this context Sewwandi is classified as a competent senior artiste able to sing any song contentedly sans much of a hassle owing to her traditional innate ability along with talent inherited through hereditary affiliations.

Sewwandi is still young deemed a mature artiste able to sing at any level as proved beyond any doubt, has a vibrant blooming future ahead of her,which all her followers and fans would wish her abundantly.