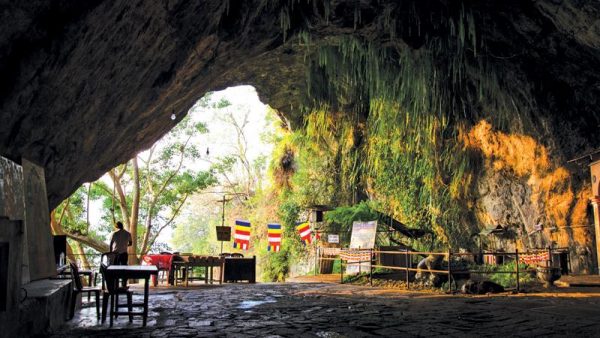 
There is so much to see, sense and hear of the mountain of Batatota where the mythical cave called Diwaguhawa is encased in thick jungle, on the slopes of Adam’s Peak

Tea pluckers busily walk among the bushes in tea estates in the undulating mountain ranges. These mountain ranges stretch as far as eye can see. The Adam’s Peak or Sri Pada rises abruptly through the lower mountain ranges. The cool cascading streams flow through valleys. Mist and clouds cover the summits of the valleys.

The sleepy village called Erathna, a mountainous hamlet close to Kuruwita, is enriched with natural beauty and wilderness. The village is on the mountain range of Adam’s Peak. One of the arduous routes to Adam’s Peak commences from Erathna. It leads to the summit through extreme wilderness and is most adventurous. Most young pilgrims to Adam’s Peak prefer Erathna route because it gives you the opportunity to experience natural environment and salubrious climate, right up to the summit.

The villagers of Erathna make a living mainly through small scaled tea plantations and by making jaggery from Kithul trees. They sell them to merchants who come from distant areas.

I have travelled a few kilometres in Batatota, a small village in Erathna. I arrive at a famous archaeological site called Diwaguhawa. The site is not only famous for its ancient monastery, but also for majestic dagaba and ancient murals. What most appeals to visitors are the wilderness and the panoramic view of Adam’s Peak which is in the Eastern horizon.

The Batatota cave temple, or Diwaguhawa, which was once neglected, has now earned fame as a religious site. It is also held in high esteem by the Buddhist community in Sri Lanka. This cave temple is visited by pilgrims with great devotion and respect. During weekends and holidays, hundreds of visitors throng to this ancient place. A car park has been built on the mountain close to the temple for the benefit of the visitors. The villagers are used to selling food, made by them, to pilgrims along the road to the cave.

The Batatota Ancient Cave Temple Renovation Society (BACTRS) took the initiative to commence a program to renovate the cave temple as the temple has been of religious significance to the Buddhists in the country.

Legend has it that this cave temple was built by king Nissankamalla (1178-1207) during the Polonnaruwa period. During this time the king had accidently discovered the temple on his way to Adam’s Peak. The Batatota Cave Temple also holds importance for the fact that Buddha rested there with 500 of his disciples, on his return from Adam’s Peak. Legend also says the that Buddha rested in this cave after placing his footprint on Adam’s Peak by the invitation of God Sumana Saman, the guardian deity of Adam’s Peak.

It is said that King Nissankamalla had visited this cave temple in the course of his religious expeditions to the Adam’s Peak. He had built the temple which exhibits the country’s rich culture. The most impressive architectural feature in this cave temple is its magnificent Makara Thorana that dates back to Polonnaruwa period. A part of it has been renovated by the villagers as it had been disfigured.

In the cave shrine one can see several crossed-legged and reclining Buddha statues. However, it is difficult to ascertain the period which they belong to. Most of the statues and paintings in this cave temple have been exquisitely renovated several times.

The paintings have been touched-up at different times. In 1908, this isolated cave had been rediscovered by an erudite bhikkhu called Sri Subethi who took great care to renovate it and built a devale (A place where religious rites are held for gods) outside the shrine. After Ven. Subethi’s demise, this religious site was abandoned. As a result, this site had become a haven for treasure hunters who destroyed most of the invaluable statues in the cave.

In 1995, most Ven. Balangoda Maithreya Mahanayaka Thera identified this ancient cave temple as Diwaguhawa. His discovery was accepted by the people visiting the ancient site. Finally, it became a famous Buddhist site among the devotees who make an annual pilgrimage to Adam’s Peak, via Erathna. During my short stay at the cave I witnessed Buddhist traits in a serene atmosphere. The most remarkable feature in the cave temple is the falling of drops of water from the ceiling, even during dry weather. There is also a pond. Rays of sunlight fall inside the cave. Adam’s Peak can be viewed from within the cave.

Sthreepura is another cave some 200 metres away from the main cave. This cave is believed to be one of the shelters of a relative of God Saman. The Adivasi community is of the view that this cave belongs to their forefathers. The chief of the Veddha community Uriwarige Wanniyale Atho regularly takes part in many ceremonies that are organised by the Batatota Cave Temple.

The Adivasi believe that they have connections with God Sumana Saman. As a result of this belief, a devale has been built and dedicated to God Saman in Mahiyanganaya temple, which is close to the native land of the Adivasi community. Archaeological excavations have revealed traces of human habitations pertaining to the pre-Christian era.

Although the original architectural designs of the Batatota cave temple cannot be seen at present, the old trees surrounded by different kinds of vegetation are visible. Flowers are in full bloom, showing the ancient grandeur of the place. 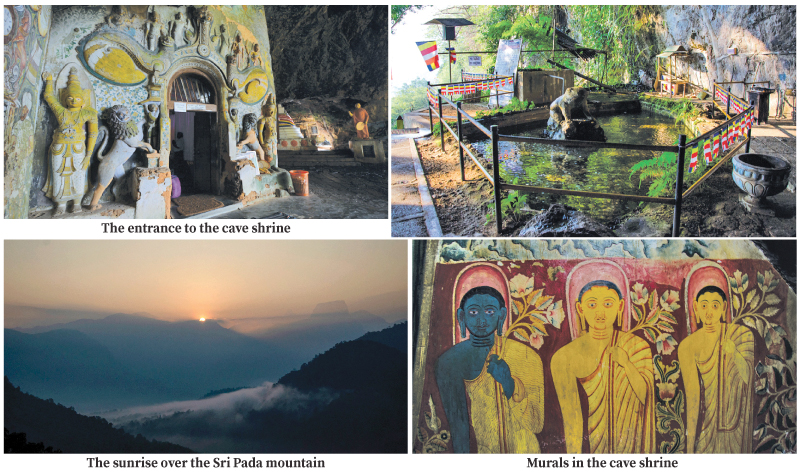 Biriyani rice is quite suitable for Diabetics-by Dr harold Gunatillake