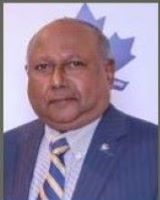 It is with profound sadness we report that Benito de Silva, popular community leader in Toronto who was a beacon of light in the Sri Lankan community for over four decades passed away last Wednesday (9th February) at Michael Garron Hospital in Toronto.

Benito de Silva was the Josephian arm of the Josephian-Peterite Alumni Association of Canada (JPAA Canada). The two co-founders of JPAA Canada in 1984 were Benito de Silva (SJC) and Upali Obeyesekere (SPC). JPAA Canada prides itself as the first Sri Lankan Schools’ Alumni Association to be formed in Canada. JPAA launched the Canadian Series of the “Battle of the Saints” in 1985, that drew large crowds since its inception. Rev. Fr. (Dr.) Stanley Abeysekara, Rector of St. Joseph’s College Colombo was Chief Guest at the 1985 inaugural match in Toronto.

Educated at St. Joseph’s College Colombo, Benito excelled in athletics, swimming, cricket, and field hockey. On leaving school. he joined the volunteer service of the Ceylon Army, worked in the private sector at Carson Cumberbatch Company and at the state-sponsored Insurance Corporation. Benito represented Insurance Corp., in Cricket and Hockey.

Benito was the much-loved husband of Annette (nee Chapman) for 58 years, beloved father of Gavin (Erika) and Diane (Roy) and doting grandfather of Nicolas, Marisa, Michael, and Victor. He leaves behind numerous nephews, nieces, cousins, and large coterie of friends who were near and dear to him. The Toronto-based Sri Lankan-Canadian community at-large are heartbroken as their beloved friend Benito – known as a man for all seasons is no more.

Anthony Gene Benito De Silva was born in Colombo on 28th September 1935. He was predeceased by his loving parents, Walter and Etta De Silva and his infant son, Glen. He was the eldest in a close-knit family of six – two sisters Therese (Jay Liyanage), and Clementine (Sumith Liyanage) and three brothers – Gen. Gerard de Silva (Junie), Eugene de Silva (Madonna) and Jerome de Silva who live back home in Colombo, Sri Lanka.

Eternal rest grant unto him, O Lord. And let perpetual light shine upon him. MAY BENITO REST IN PEACE, AMEN!