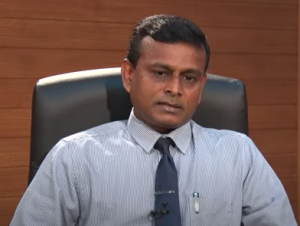 Commissioner General of Labour in Sri Lanka is a very challenging post having diverse functions and roles to play. Among many enforcements of about laws and rules take pride of place. Intervention, mediation, and conciliation in industrial disputes with a view to bring in settlements. In the current scenario with Covid-19 lockdown and pandemonium creating a unique situation influx of expatriates from mostly middle east countries after retrenchment also similar situation locally where many have been forced to leave their vocations. With these conflicts that had arisen, in this context of added work the present Commissioner General of Labour BK Prabath Chandrakeerthi is loaded with wider range of challenges.

Prabath possesses Bachelors Degree in Arts from the University of Kelaniya. Subsequently had follows courses at the Open University of Sri Lanka, Sri Jayewardenepura University and the Law College from where he possess  LLB degree.Had successfully passes the Sri Lanka Administrative examination with colours. Prabath had been invited for the 35th Annual General Meeting of the Sri Lanka Administrative Service Association held on 26th March 2018 at Nelum Pokuna Theatre as the President of the SLASA, presided by His Excellency Maithripala Sirisena, the President of the Democratic Socialist Republic of Sri Lanka gracing the occasion as the Chief Guest.Prabath had been committee Member, deputy President and subsequently the President.

Prabath Chandrakeerthi had been afforded the opportunity to attend to seminars locally and internationally. Had been chosen for a seminar on public administration system in China. Obtained a diploma in new public management in Thailand also a course in Tourism Management in Thailand. Also competent in computer science and General Management.The LLB qualification had helped Prabath to a master’s degree in economics.

Before assuming duties as the Director General of Labour in October 2020 Prabath Chandrakeerthi as a special grade officer of the Sri Lanka Administrative services, had served previously  in several vital positions like Cadet in SLIDIA,  A/S Educational Ministry Uva Province, the longest stint was for a period of six years from year 2006 was as Senior Assistant Secretary in the Sri Lanka Parliament.Prabath had also served as the ADS Biyagama Divisional secretariat office.Prior to the present post was assigned as the Director General of Coast Conversation department assigned on a longer spell.During this period he had done many changes to the coast conservation in the island not done hither prior to his appointment  to benefit the Island.

During the brief tenure as the Director General of Labour Prabath Chandrakeerthi had performed admirably bringing in new theories to add to the existing procedures. Obtaining the able assistance of the Women’s and Child affairs units a ‘theme song’ with video was produced which proved to be a masterpiece to the lyrics of Dr Rathna Sri Wijesinghe and to the music composition and melody also of a maestro in Dr Rohana Weerasinghe .The backup singers were all reputed namely Udesh Indula,Tashni Perera,Chethana Ranasinghe,Mahesha Sandamalee, Janith iddamalgoda,MG Dhanushka and B Nithyananda. This video song was intended for eliminating of child labour which is still widely in existence.

This subject to eliminate Child labour was further elaborated on “Worlds Children’s Day” on 1st October 2021 when a short film for just five minutes was to be produced in all three languages. The title of the competition was termed “ Chalana Roo” for the theme” let’s eliminate child abuse”.The main aim was give strength and awareness of child abuse to sons and daughters. A strict condition was it should not be a ‘copy ’or ‘imitation’. This competition for the Director General of Labour was assisted by the Women’s and Child’s units of the  labour department. The target group  for the competition were between the ages of 14 and 16.It  has been proved that in comparison to figures of child abuse in all Asian countries the figure in Sri Lanka is  relatively low as 1 % which is very heartening to hear.For this competition labour department sought the assistance of Labour department, child protection department and the Probation department.The target the Director General of Labour and staff target is to bring down the child abuse percentage to 0%.

The Director General and the supporting staff have had to face and answer to many complaints and grievances that had arisen to expatriate workers who returned to the country after retrenchment.Figure indicate that 35000 to 40000 have already returned and another similar batch were to return.The DG had also received complaints from employees who had been retrenched locally owing to collapse of private businesses. In these cases the department is finding ways and means in resolving these issues.In the case of employees deployed in private companies retrenchment could be made only after payment of compensation the amount was stipulated  had been rupees twelve and a half lakhs earlier but this figure had been now increased to rupees twenty five lakhs as the previous act no 45 of 1971 which is now absolute and redundant obviously pretty stale.

The retirement age of private sector employees was recently increased to sixty years from the earlier fifty five years.However in some occupations like physicians and lawyers the retirement ages have been further enhanced to mid-sixties.

In the case of minors no one could employ a child under fifteen years.Also safety regulations have been enacted as laws not allowing children under eighteen years to be deployed in dangerous occupations like fishing and working in gemming.

The salary anomaly issue of estate workers daily wage had been hanging without a solution since year 2015 about the pleas to increase the daily wage of estate workers from Rs 750/- to Ra 1000/ -At a recent television discussion the Director General spoke on this long standing issue.It was added the  estate workers lead a very miserable life in trying  living conditions.There is guarantee of daily work which all depends on the availability of crops like tea to be plucked.It was added that there are twenty two estate companies of which only two had agreed to pay the higher amount. Director General Prabath Chandrakeerthi had quipped that despite having over ten meetings the issue had not been solved which is unfortunately still pending.The trade unions too posture questions that this agreement should be for a stipulated period in contriving  to the period suggested  by the estate administrators. This long-standing matter is still outstanding despite the efforts of the DG.

In the context of the above there are so many issues confronted that needs to be resolved .It was under Prabath Chandrakeerthi  the decision to increase the minimum age of recruitment was reached in order to improve the safety of children,ensuring they are allowed to complete education and also to improve physical and mental health of children made in early year 2021.In this regard the draft bills have been amended resolving the contradiction between the labour law and education law of the country.

Also, it was under the Commissioner General of Labour Prabath Chandrakeerthi in January not long after he assumed duties the minimum age of recruitment of children for employment was raised from 14- years to 16-years. Furthermore the employment of this group  in 51 types of dangerous jobs were banned.In addition to these 51 dangerous jobs another 20 types of jobs that includes the deployment of children for domestic aides.

According to Prabath Chandrakeerthi, in addition to these 51 dangerous jobs, another list of 20 jobs that includes the employment of children for domestic aide have been forwarded to the Legal Draftsman’s Department to be amended as dangerous jobs, with the subsequent approval of the Cabinet of Ministers.These classified as dangerous jobs include employment of children in weapon industry, gemming also as attendants for serving alcohol in restaurants and clubs. According to the Department of Labour, at present, the fine for employing children in such risky jobs is fixed at Rs. 1000 or one-year imprisonment or both, moreover, a magistrate can order that a compensation of Rs. 100,000 be paid to the victims.

From the above it is proved beyond any doubt that during the short time Commissioner General of Labour Prabath Chandrakeerthi had achieved within such a short period of less than one and a half years in this prestigious position, not done in the preceding years which augurs well for in Sri Lanka.It would be the fervent wish of all Sri Lankans that Prabath Chandrakeethi would achieve more necessary deviations amending the existing laws for the betterment of all Sri Lankans as the Commissioner General of  Labour.