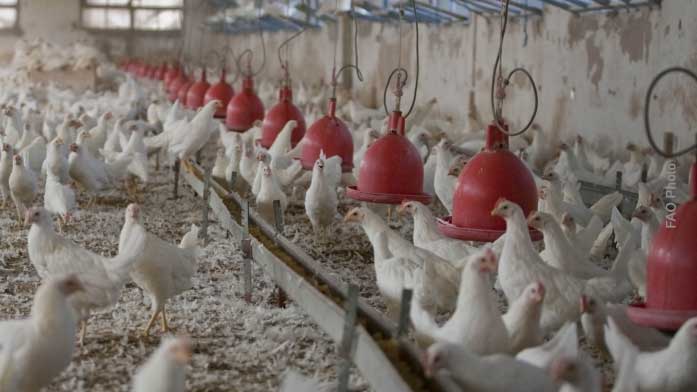 Dressed freshly killed chicken in small shops are now selling around 1,000 a kilogram while value added tax and a cascading social security levy is adding close to 200 rupees to the price of frozen chicken in supermarkets.

Sri Lanka’s egg supplies are still tight after the Consumer Affairs Authority slapped price controls on eggs and incentives farmers to kill layers instead of farming new ones as feed prices surged during the height of the currency crisis, Gunasekera said.

Sri Lanka’s central bank hiked rates in March as the rupee collapsed after two years of money printing and galloping inflation threatened to turn into hyperinflation.

A bird flu outbreak in the UK has created a demand of poultry. Sri Lanka also began exports to the Middle East during the Coronavirus crisis.

“We are hoping to export chicken because of a viral bird flu, but the only constraints are taxes and 80 percent of our production cost is on animal feed,” said Gunasekera said.

“We are not competitive because of the animal feed issue and the taxes placed, which makes us to be underthrown by other competitors,”

However, potential exporters are hoping for tax cuts because Sri Lanka is being substituted because of taxes increasing cost of export.

Minister of Livestock said in Parliament that, Sri Lanka had 249,063 chicken farms, however after Sri Lanka’s crisis 16,500 farms are closed, results in self-sufficiency are likely to be seen in one or two years.

Minister Herath however was on a North Korean style self-sufficiency track and not being export competitive.

“Specialists have said that Sri Lanka will be able to achieve sufficiency if we had consistent supplies of food and water,” he told parliament. (Colombo/Dec08/2022)