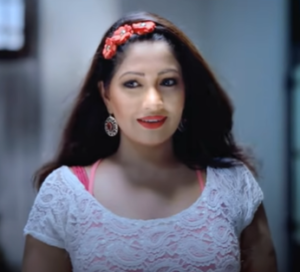 Piumi Shanika Boteju is in the limelight in the artistic field as a Actress,Model, TV Presenter and a Dubbing artist for the past two decades since she was crowned winning the coveted Lakhanda Avurudu Kumari title in year 2001.At the beginning she had been a presenter in the ITN Lakhanda frequency modulation radio channel.

Piumi is the fourth and only daughter of the Boteju family.Father a retired bank officer while mother was a teacher. Piumi as the only daughter had lived in an atmosphere of the three bothers who were good at sports more than academic studies. Piumi had followed them had grown up with boyish qualities. Had been a good athlete gaining experience competing with the brothers.It has been confessed she had been possessing qualities of boys as a result even boys were scared of her apart from girls. She had studied in three schools namely Kotte Dharmapala College, Pannipitiya Dharmapala College and the Gothami Balika Vidyalaya in Colombo. As her mother was a teacher, she had to change schools when she was transferred she was compelled to admit Piumi to the same school. She has had her education under the close supervision of her teacher mother as she was destined to act like boys possessing boyish characteristics.

It has been confessed that her three elder brothers have had heaps of friends who used to visit their humble home in numbers to play ,which Piumi had disliked. She had to be confined to her room as the brothers disliked her to been mixing with them.She had lamented that she had got beaten by the three elder brothers very often for her misbehaviors. When father Boteju takes the cane to beat them Piumi used to intervene in preventing them from been punished.  But regrettably when the brothers sneak to father about her wrong deeds, they do not obstruct the father, when she is punished. Which is disgusting and a pity she had lamented.

Piumi  shot up to fame and limelight almost overnight when she portrayed the role of “Himali” in the mega teledrama Paba in the ITN, where she acted like a veteran showing no nerves.Thearafter she became a  bit of a sought after actress portrayed  a role in mega teledrama ‘Vasuda’ in the Sirasa TV.Also was elected to portray a role in the film “Samara” her debut film in year 2006 which all came in quick succession.

Piumi has proved her competency to portray roles in Sinhalese comedy episodes with veteran actors Giriraj Kaushalya and Priyantha Seneviratne which are equally popular to what Annesly Dias,Berty Gunatilleke and Samuel Rodrigo trios comedy acts.Piumi has innate skills for all types of portrayals without any hereditary affiliations. After the demise of veteran comedian late Mercy Edirisinghe it is Piumi Boteju who has successfully filled the void combining with Giriraj and Priyantha.

Piumi has a tattoo etched just below her right wrist.It is learnt that she has copied it from her favorite  Ricky Gervals the English comedian, actor, director and lyricist who has a similar tattoo on him.This she had got imprinted without the knowledge of her husband even.

Piumi’s first marriage to Harsha Bulathsinhala had ended in a separation. Thereafter she had married a politician a member of a provincial council Suneth Aththidiya. Recently there had been rumours not confirming she has had her third marriage to Danuka Dilshan even the media is unable to confirm it ,as it had been attended by a few guests. The media is puzzled as to whether the photos on the you tube are for a photo shoot or those at a taken for a tele drama. The truth however would be disclosed and known soon.

However she hopes to emulate her parents and elder brother have had four children each ( three males and one female).Her second bother has two kids and the third just one child. Hope her intention would be fruitful.

Piumi had lamented that she is not at all a shrewd individual who never cheats but is prone to get cheated as once it proved costly when a colleague actor had approached her to purchase her vehicle who had got all papers signed and vanished with her car without any payment, with that experience she had learnt to be more vigilant in that aspect.

From her career as an a actress particularly as when performing comedy, she enjoys what she does.She does the needed homework, finding the character, perfecting the technique, commit to the text, then go to an audition, having  fun taking risks, confident of bringing out her best thereby becoming a successful comedy actress too.In the contest of the above Piumi has all the characteristics of being a good all round actress as she could portray any role that she is asked to perform.