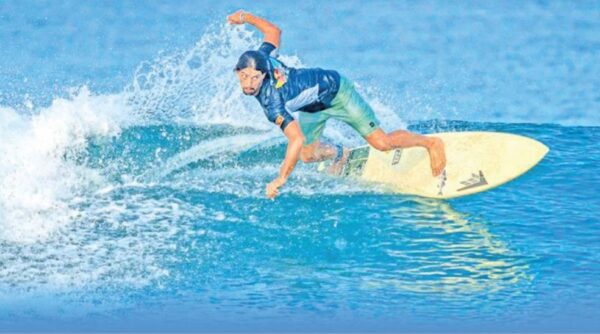 
Sri Lanka’s self-taught surfing champ Lakshan Madushan traded the cricket pitch for the waves and will stop at nothing to conquer every wave in the ocean as the nation’s foremost exponent:

Lakshan Madushan is the current top ranked surfer in Sri Lanka and had his maiden experience with the waves from the age of 10 years at his birth place in Weligama in the south.

In an interview with the Sunday Observer, the 22-year old surfer who also conducts a surfing camp in his home town said he sees a very bright future for the sport in Sri Lanka if benefactors and godfathers can rally around like they do with other Olympic sports in the island. 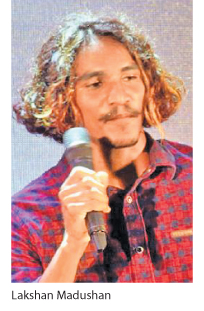 Lakshitha or Lucky has become the face of Sri Lankan surfing due to his charismatic influence towards the sport. One of most notable and popular surfers in this island nation as well as across the foreign community Lucky has explored new waves in Sri Lankan surfing after a two year absence due to the pandemic.

Excerpts of the interview:

Q: Surfing is not a popular sport in Sri Lanka and most people don’t even care to witness it like they do with say football, cricket or rugby. Can you explain to the majority what exactly is surfing?

Surfing is something more than a sport it’s actually a way of life and also this can be defined as a profession and also as a sport.

Also, even every sea wave is unique where none of them are the same. For example, when you normally play cricket you can play the same shot over and over again but in surfing once you ride a wave you can’t get the same feeling from another wave because all the sea waves are not the same. That means every day there is something new to learn.

Q: So what made you choose surfing and not any other sport?

A: To be honest I played cricket and gave it up to do surfing after doing both sports. I thought everyone plays cricket so why don’t I just keep it aside and surf. So I stopped playing cricket and came to surfing because this is something absolutely new for us and also I live by the beach and surfing is much better for me than playing cricket.

Q: Who was there to guide you to do full time surfing?

A: My uncle, he encouraged me. He started a hotel after the tsunami and had a surfing camp at the premises. So my uncle Upul who is a surfer encouraged me about the sport and that is how I entered surfing for the first time. By just seeing him surf the waves I learnt a lot from him.

Q: Currently you are the number one ranked surfer in Sri Lanka and what was it that you had to do from your part besides your uncle’s guidance?

A: Dedication came first and then having one specific target and a nothing-to-lose mindset. Luck also did its part when it came to my success story.

Q: When did you decide to do surfing as a profession?

A: Initially I looked at surfing as a hobby and not to be a professional surfer. I really enjoyed it so much and that is why I wanted to keep doing it. I didn’t start surfing just for competitions. At that time there was not much competition like nowadays. I started this sport because of the feeling and only after when competitions started one by one that I decided to compete.

Only after participating in those competitions, I realized that I was improving faster than others. Then I didn’t stop, I continued and it became my passion.

Q: Can you recall your first competition?

A: It was an event called the Mitigama Open in 2015. I was eliminated in the semi-finals and failed to win it. The first event that I won came in 2016 when I won first place in the 2016 Red Bull Ride My Wave championship. That was the first event where I got into the first place.

I have won the most number of the Red Bull Ride My Wave events in Sri Lanka. I won it three times and the same number of times at the Nationals. I participated in competitions in Japan and the Olympics competition as well as in China. My target is to take Sri Lanka’s name as far and wide as I could. There is more work to be done and more hard work ahead and I hope I will be able to receive a helping hand to take me and Sri Lanka forward.

Q: Are you talking about an Olympic medal?

A: Of course, it is not something impossible. But I should work really hard for it. Because surfing only in Sri Lanka is not going to be enough. We need to have foreign competition to gain that international experience and exposure if we want to go for Olympic glory.

But for all this to happen we need sponsors and some support staff right now. Even a surfboard costs something like Rs. 150,000 and also it can be broken even on the first day. There are a number of surfboards that had been broken on the first day and the first week. I once broke a surf board during competition and had to go back to get a new one.

Q: Do you see any difference between the Lucky who was not into surfing back then and the Lucky now who is a champion in surfing.

A: Now there are more people who are taking up surfing by looking up to me. Back then there were only 10 or 15 surfers in Weligama, but now we even have two surfing clubs in Weligama. I am truly so happy that the next generation of people have learned something from us and taken up surfing. I feel so happy seeing them. I have done my part initially for this sport to establish itself in Sri Lanka. Because of us, the young ones picked this field and they believed us and joined surfing. Back then we were not even allowed to surf that much because only a few people were doing it.

Q: Can you tell us about the current status of surfing in Sri Lanka?

A: Surfing has a long way to go in Sri Lanka. As I said before there aren’t very many surfers in Sri Lanka to say that surfing is now a major driving force.

Foreigners are the ones who prefer the sport most. Sri Lankans are quite afraid of the water, they cannot swim properly and they lack knowledge about this sport so the progress is not as it should be but there is some improvement.

Q: So what must be done to take surfing to another level?

A: As I said this is an expensive sport, sponsorship is a must for us to move forward professionally. The main reason why we need sponsorship is the high price of equipment and because there is no production of equipment here in Sri Lanka, we need to import them. Also, government support is a must. Surfing is an Olympic sport. If we get the necessary support hopefully we will be able to compete at the Olympics.

Q: Does Sri Lanka have the right kind of waves to take surfing to a higher level for international competition?

A: If we can get opportunities in countries like Mali or Hawaii that will give us with the required exposure for international competition. We cannot pipe-dream and say competition in Sri Lanka alone is enough to compete at the highest level overseas.

Q: Why do so many foreigners come to Sri Lanka to surf?

A: The first thing is that Sri Lanka is an island and the water is not cold so they can surf with any comfortable swimming wear and the sunlight we usually have is an advantage. Most of the foreigners coming to Sri Lanka to surf are beginners and intermediates but there are also the advanced level surfers.

Q: What kind of advice would you like to give to a beginner who wishes to pursue surfing?

A: You should surf continuously in a serious manner. If you stop you should start all over again from the beginning. If you just do it as a hobby then it is okay you can just go to the beach whenever you want and can surf the waves but if you want to be an athlete continuation of the sport is a must. Also smoking and alcohol do not go down well with surfing as you need a high lung capacity for this sport. There is no reason to be afraid of the waves and swimming skills are not a must at the beginning because we start to learn to surf in the shallow water.

Q: Can we introduce surfing as a school sport?

A: Yes, we can. For that, there should be a proper plan and management because it is a great responsibility if we are talking about school children. Also for that, there should be experienced coaches and trained staff too. Yes, we can develop this as a sport in schools at least schools that are located close to the sea. We also need coaches and physiotherapists. Most of us are self-taught.

Q: What are the chances of women in surfing?

A: There were a good number of women participating in the Red Bull Ride My Wave event recently. There is no gender restriction for this sport. There is no problem with that.

Q: How important is government support?

A: If the government supports the Federation then the Federation can support us with coaches and the expertise and even equipment which are expensive.

Q: Apart from targeting the Olympics, what are your future goals?

A: I will want to support the younger generation as much as I can and is possible for me.