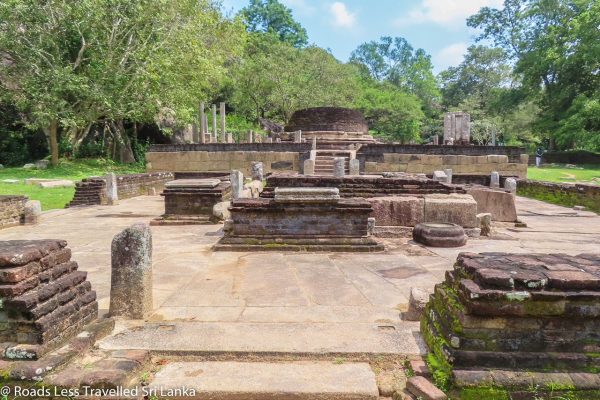 Located in a spectacular setting, enclosed by rock boulders, Hatthikucchi Viharaya (Viharaya meaning temple in Sinhala), the ruined ancient temple complex is situated on the northern border of the North Western Province, approximately three kilometers from Padeniya – Anuradhapura (A28) road.

Within an area of approximately 120 hectares, Hatthikuchchi Aramic complex is also referred as “Hastikuchchi”, “Hasti Kuchchi” and Rajanganaya Ruins. But the site is well-known as the location, the exiled *King Sirisangabo (251 – 253 AD) offered his head to a pheasant.

‘Hatthikucchi’ (meaning ‘Elephant Stomach’ in Pali), the Temple is thus named due to a large rock inside the Temple Complex which resembles an elephant.

According to historical records, the Complex is considered to have been built by King Devanampiyatissa (307–267 BC) and is considered as one of the oldest Buddhist temple complexes in Sri Lanka. The Complex was abandoned for some time and was engulfed in thick jungle.

Until 1979, this area was known as “Rajangana Ruins” (name of the adjoining village). In 1979, the Department of Archaeology erected a board identifying this place as Hatthikuchchi. According to historians, this area has been known as “Attanagalla” as some inscriptions in the area refer to a place known as “Athara Galla”. Hence, scholars are of the view that Attanagalla also referred to the same location. Later, it was renamed “Hatthikucchi” after an inscription was discovered identifying the location as Hatthikucchi, mentioned by the ancient scholar Buddhaghosa who described the Temple Complex as one of the monasteries that attracted a large number of pilgrims.

Scholars are of the view that this was the location where King Sirisangabo (251–253 AD) offered his head to a peasant, although it was considered that the incident took place at Attanagalla in Gampaha District (Attanagalla is situated 170 kilometers from *Anuradhapura). The distance the peasant traveled (from Anuradhapura to the location is approximately 38 kilometers), within a day and the close proximity of Hatthikucchi to Anuradhapura also confirms this fact. 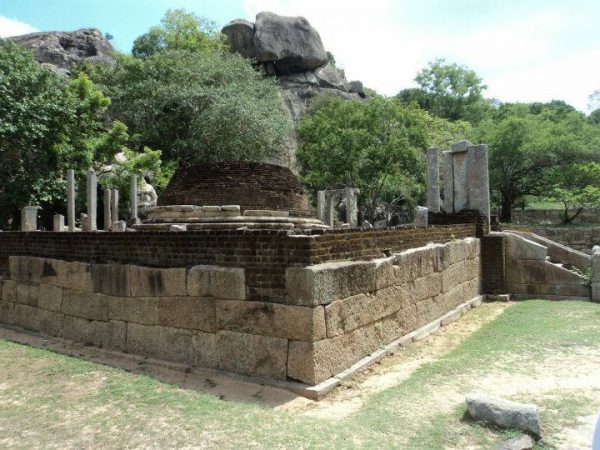 The main buildings of the Temple Complex are a vatadage (a stupa house), an image house, several stupas, an alms hall, a semicircular building, an image house restored during the Kandyan era (from 1597-1815, the last independent monarchy of Sri Lanka), cave dwellings used by meditating Bhikkus, ponds and stone inscriptions. Although, the stupa in the vatadage is in a dilapidated state, its remains, two impressive stone doorways are still intact. There are mediation chambers made out of three slabs of rock in the pathway between the vatadage and the steps leading to the rock towards the right, facing the jungle area.

There is a tomb in the location where ash, considered as those of King Sirisangabo is interred. In this tomb, the tombstone is built from bricks resembling a human body with a granite sphere without the head, as the head was missing in the dead body.

Over 50 rock inscriptions have been identified on the rock and its base, dating from 2nd to 9th centuries AD indicating that the Complex existed during the same period Buddhism was established in Sri Lanka by Arhat Mahinda Thero (profoundly sapient Thera who established Buddhism in Sri Lanka). Among them, there are several inscriptions, known as “Vaharala”, with reference to the task of freeing of slaves from compulsory service. This location was a highly developed Buddhist center in the past.

There is a Buddha Statue at the foot of the rocky mountain in an image house in a natural cave, considered to date to Kandyan era, whereas the stupa house had been constructed by villagers during a later stage.

At the summit of the mountain, there is the oldest stupa in close proximity to the dilapidated stupa and a carving of a man carrying something in the hand which scholars are of the view that, it is the pheasant carrying the head of Sirisangabo, to collect the reward.

From the summit of the mountain, there are breathtaking vistas of the jungle below with many weirdly shaped boulders spread across a large area. There is also a hanging rock that is incredibly balanced on the edge of another rock, an amazing sight.

Although King Sirisangabo ruled the country only for two years (251-253 AC) and did not construct significant monuments or irrigation systems, he is a famous king in the history of Sri Lanka.

At present, excavations are under way at the location and more ruins are yet to be found covered with the jungle.

As the Temple Complex is located in an area surrounded by a jungle, elephants visit the area, especially during the dry season.

As the roads are in good condition, those traveling in a car can also easily go up to the designated car park area. From Kurunegala – Travel along Puttalam Road (A10 route) up to Padeniya. From Padeniya, turn to right towards Galgamuwa (A28 route). After passing Galgamuwa, at the 37th kilometer post, there is a junction known as Mahagalkadawala (sometimes referred to as Gal-kalla). Turn left from this location and there is a board towards Hattikucchi. After travelling about three kilometers, there is another board and turn left. The Temple Complex is located about ½ kilometer in this road.

From Anuradhapura – Travel along Galgamuwa Road (A28 route) and pass Thalawa and Thambuthegama and reach Mahagalkadawala after passing the 36th kilometer post.

Lena Martell .. one day at a time

Thomian, Trinitian to light up