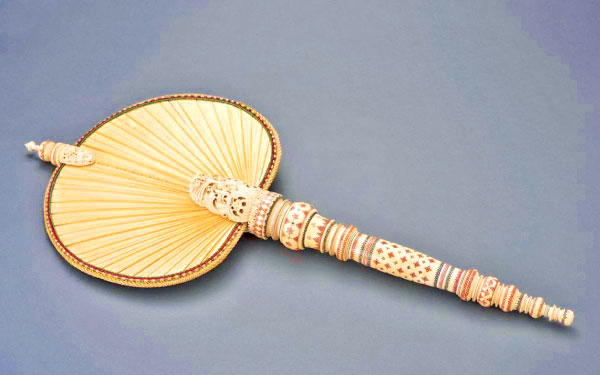 Sri Lanka is embellished with various skilled crafts. One of the lesser known art forms from centuries ago is the exquisite skill of carving Ivory. Globally, ornamental ivory carving has been an art in demand. One of the best ivory carvings in the world is the throne of Maximianus, the Bishop of Ravenna. In my view a clergyman wanting an ivory throne is unbecoming of that sacred office. Ivory hunting horns called Olifants were in vogue among the rich centuries ago in Europe.

Sixteenth-Century Sri Lankan ivory carvers had created the famous ivory caskets scattered in public and private collections throughout the world. This includes a number of fans and combs, along with religious representations. They are covered with floral designs, animal motifs and human figures. Some caskets illustrate historical scenes, while others show regal splendour. Sri Lankan monarchs are depicted proudly seated on thrones. Other designs manifest carvings of kings riding elephants into battle encounters. These ivory caskets were handmade as specific diplomatic gifts, luxury curiosities or export art. Although they are different in size, they were all rectangular ivory boxes, presenting a rectangular front and a back with arched sides and a pitched lid. Annemarie Jordan Gschwend’s extensive exhibition catalogue on ivories from Ceylon has also highlighted the use of European prints in Sri Lankan ivories. The materials show that the Sri Lankan ivory carvers were innovative like the painters in the flamboyant Mughal Empire and Japan and creative as the ivory carvers found in Africa and the Philippines. These artists’ creative domain was destroyed by Portuguese plundering missions and the subsequent occupation of the kingdom of Kotte. This is sadly a black mark in the propagation of religion. Ironically the world of sixteenth-Century Sri Lanka ivory art partially survives because artifacts from this complex encounter were later scattered across the globe as a consequence of the Portuguese presence in maritime Ceylon.

William Fagg uses the phrase ‘Afro- Portuguese’ ivories referring to ivories from Sierra Leone, then Benin and the Kingdom of Congo. Experts in art now endorse that such ivories were carved as ‘gifts for the patrons of the Portuguese voyages’ and were made for sale to Portuguese elites and traders, who could lavishly spend money. Although the makers of these caskets put much effort into carving traditional South Asian motifs, their visual responses to European prints indicate that they were part of a larger connected world. Did the ivory carvings resonate with temple architecture of that era? The Robinson casket at the Victoria and Albert Museum has two rows of lotus petals facing each other. Some caskets are adorned with gold and gems. Lotus petals are often found in Sri Lankan temple architecture from the Anuradhapura period. Several of the caskets can be categorized as diplomatic gifts or exotic luxury goods, created with the Lisbon court or European patrons in mind. The Sri Lankan ivory caskets are modeled on the form of sixteenth-century European leather caskets adorned with metal handles. Maybe this is why some caskets depict Christian imagery, with figures of the Blessed Virgin Mary and the life of Jesus Christ. I was surprised to find one photograph of an ivory casket with the splendid carving of the “Tree of Jesse” (depicting King David and King Solomon leading to the genealogy of Jesus Christ) from ancient Sri Lanka, now at the Victoria and Albert Museum, London. How did our ivory carvers learn of this Biblical story? Was the design given to them by a Portuguese priest? Perhaps there was contact with the ancient kingdom of Israel. I have previously written an article that the ships of King Solomon had sailed here to procure certain items for the building of the sacred Temple of Jerusalem, including cinnamon oil for the Jewish temple rituals. Sri Lanka can indeed be the once vibrant port of Ophir, which is mentioned in the Old Testament of the Holy Bible. The beautiful ivory casket called “Robinson casket” also has a carving depicting Joseph and Mary. She is pregnant with the Christ child. Some experts opine this design could have been implemented during the reign of King Dharmapala, a converted Catholic.

The Portuguese art historian Nuno Vassallo Silva has noted that ‘it is relatively easy to identify European prints as the sources used for the decorative motifs on Sinhalese ivory during this period’. Do these intricate ivory carvings reveal a South Indian influence? If so did Indian ivory carvers work in ancient Sri Lanka? Is it possible that our ivory carvers travelled to India to observe some of their designs? Sri Lankan architecture does display some Indian influences. Could this have inspired Sri Lankan ivory carvers to replicate these designs in their work? For example the presence of the tripatta kumuda does not mean that a building displays a South Indian Hindu kovil. This feature can also be found on the basement mouldings of Buddhist temples (the Temple of the Tooth at Yapahuva and the Gadaladeniya Rajamaha Viharaya built in the Gampola era). This architectural element appears in various types of religious

structures in Sri Lanka including Buddhist viharas, Hindu kovils and devales. A few of the ivory caskets also share the symbol of a lion: a gallant row of lions runs along the bottom of all four sides of the Coronation casket which is now in Munich, Germany. Can we safely assume that the images of the lions on these ivory caskets indicate that these were made in ancient royal workshops of Sri Lanka? After all, the lion is on our national flag and an icon of our culture for centuries. If not, were these beautiful ivory items made as gifts to garner royal support? Rows of lions appear on the basement mouldings of our medieval monuments. At Polonnaruwa (1017–1215 CE), this motif is found on the basement mouldings of the audience halls of King Parakramabahu I and King Nissankamalla, as well as at the Buddhist structure of Manik Vihara.

At Gadaladeniya Rajamaha Vihara, a row of lions adorns the stone steps leading up to the temple. This motif may echo the vyala (yali), or mythical-lion observed on the basement mouldings of Hindu kovils within South India. It is also found on the Saraswathi veena (musical instrument). The architectural references found in the ivory caskets clearly allude to shared visual heritages between Sri Lanka and South India. Ivory was used to make combs in Ceylon. Wearing these combs was a sign of wealth and authority. Ivory was used to make fan handles which were gifted to senior Buddhist monks. Ivory handles enhanced the knives and daggers used by ancient army chieftains. The ivory carvers of that bygone era have shown us tremendous talent and skill coupled with patience. It would be nice if we could have some of these ivory caskets on Sri Lankan soil, as part of our proud heritage.

He was a symbol of sincerity-Prof. N.D. Samarawickrama