A team mate, a brother and a dear friend-by Rex Clementine in Bangalore
Advertisement 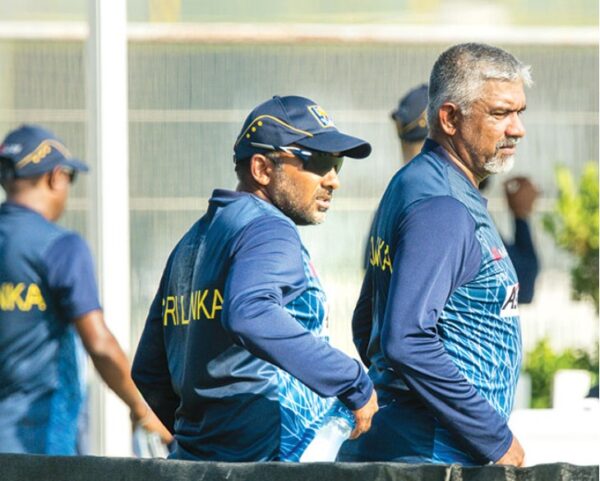 Decorated Army General Shavendra Silva some time back was appointed as the Chairman of the National Selection Committee. The role of this committee is to oversee the appointments of selection committees to all sports that are under the Ministry of Sports. He didn’t have many issues dealing with the appointments, but when it came to cricket there was a bone of contention. The Cricket Advisory Committee moved full steam ahead backing Pramodaya Wickramasinghe while the National Olympic Committee raised objections. NOC argued that while there’s no issue with Wicky being part of the Selection Panel, it was pointed out that Chairman of Selectors had to be a person of stature, preferably a former captain. There were heated arguments. Aravinda, MJ, Sanga and Murali came to Wicky’s rescue. Not only have they shared the same dressing room, Wicky is also a dear friend to some of our legends. Friend in need is a friend indeed, they say. Some of these legends consider him as a brother. It could be interesting to find out whether any legend has business interests with Wicky?

Battle hardened General Silva having spent decades on the war front is known for his no-nonsense approach. But when Ara, MJ, Sanga and Murali backed their man, even he mellowed. He observed that whether there could be better cricketing brains than the foursome. He let them have it their way. Alas, not only General Silva, all the cricket loving public have been let down. In the corporate world, for a business to thrive you put professionals in charge and not your friends. Why the legends did otherwise is a serious question. No one is infallible though.

The legends may counter-argue that they had Hobson’s choice but to name Wicky as SLC had sent just a few shortlisted names as selectors. Wicky had already served in the previous committee so he had an advantage to be named Chairman. But hang on, have the legends followed protocol in all their dealings? They have taken many shortcuts and made the SLC Executive Committee dormant. So why make an exception when it comes to a key position that is so vital for the well-being of the game. Well, grapevine has it that they wanted someone trustworthy.

Another chief selector would have vehemently opposed paying peanuts to an Angelo Mathews or a Suranga Lakmal. With Wicky it was possible. The end result, the premature retirement of Lakmal. The consequences of his departure will be soon felt. Lakmal will keep bowling for hours from one end maintaining great discipline. There was enough motivation for Lakmal too as he was nearing the 200 Test wicket mark. There are eight more Tests this year and Lakmal could have extended his career. But legends paid Lakmal a pittance.

A bull in a China shop is less troublesome than our Chairman of Selectors. Also, don’t forget that Sanga and MJ were the very guys who fought for the pound of flesh when they were players. Today, under their watch players have been treated shabbily. Some Managers at SLC draw higher salaries than our Test captain. That’s the greatest insult done to the institution called Sri Lankan captain. With a 35,000 USD annual retainer, Dimuth Karunaratne is the lowest paid Test captain in the world.  Each Legend took home a cool  100,000 USD above annual retainer when they were players. There’s no better example for poacher turned gamekeeper than our legends. They may argue that they were among top ten ranked players at their time. Well, so is Dimuth.

Soon the current selectors’ terms will end. Let’s have a system where the board advertises the post of selectors and let’s chose from the applicants rather than picking your mates and business partners.

The blunders of the current selection committee are far too many. We have a dollar, gas, fuel and electricity crisis. Like others, cricket crisis too will deepen. The selectors are solely responsible for the status quo. Anyone in his right mind will not play Dinesh Chandimal in T-20 cricket and overlook him for Tests. The selectors’ reading of the game is that bad. Uncle Percy would do a far better job.  The selectors have avoided the media like the plague and never once have called a press conference to explain their decisions. That maybe a good indication of their guilt.

We need some competent people running the show. Not friends or business partners of legends.

SUNDAY CHOICE – He took my place on Calvary