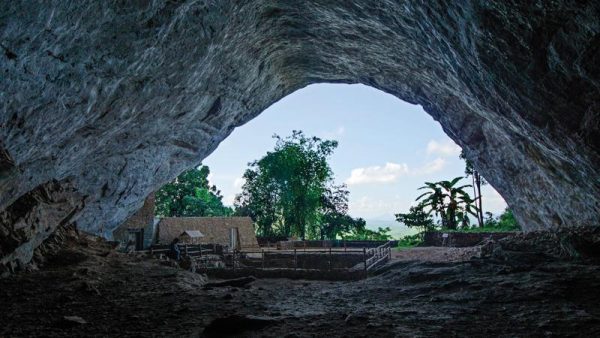 The story of ancient Sri Lanka begins with the culture of stones. Call it Stone Age, call it prehistory, and call it the time before the dawn of history, whatever the labelling, the life and times of early man, especially the early Sri Lankan man, are a fascinating study.

We find the early man was not confined to just a single space. He lived everywhere, in coastal areas, in the forests and most prominently in caves.

A scenic drive through rustic countryside will bring you to Yatagampitiya, a sleepy, mountainous village with an abundance of lush greenery, about seven kilometres from the Bulathsinhala town in the Kalutara District. Pahiyangala is about 40 kilometres from Colombo and one of the closet drives from the capital to a significant historical site. It lies off the Piliyandala –Bulathsinhala road and is accessible from Horana and Katutara.

As you turn left from the clock tower at the Bulathsinhala town, you will see an Archaeological Department sign board, saying ‘To Pahiyangala cave’. The narrow carpeted road leading to the site is bordered by lush paddy fields that provide a visual feast. The Pahiyangala rock cave is a massive structure found amid a 75-acre verdant forest reserve where numerous endemic species of birds and butterflies can be found. Entrance to the cave is over a steep flight of 400 stone steps.

The Pahiyangala excavations in 1980 shed some light into the intriguing yet arcane world of the pre-historic man, but it brings up more questions about the Pahiyangala cave, also known as Fa-Hsien’s cave, which belongs to the stone age dating back over 30,000 years and is known to be the most ancient pre-historic human settlement in Asia.

Although I have visited this ancient site on several occasions, newspaper reports, which said researchers from Oxford University studying the skeletal remains were convinced it belonged to a woman between the ages, 18 and 22, who had died over 10,000 years ago, enticed me to visit the cave again.

My memories go back to the latter part of 80s and the many occasions I visited Pahiyangala, especially when there were religious festivals. The multiple visits were due the fact that the cave was close to where I lived, Botalegama, which was just 17 kilometres away.

The 1980s were a prosperous time for Pahiyangala and adjoining villages because then Finance Minister Ronnie de Mel had initiated many development projects in the area with the help of the Chinese Government, including the initiation of the China-Sri Lanka Friendship Village, which was aimed to build houses in the foot of the Pahiyangala cave temple for the homeless.

The Pahiyangala rock cave is found amid a 75-acre verdant forest reserve where numerous endemic species of birds and butterflies can be found. Visitors taking the path to the mouth of the cave over a steep flight of stone steps are struck by the awe-inspiring panoramic beauty of the surrounding landscape.

A bhikkhu welcomes visitors at the entrance to the cave and gives a guided tour, giving details about the archaeological excavations. The cave, which has a wide open space large enough to accommodate more than 500 people at a time, is home to a 15-metre statue of the reclining Buddha. Adjoining this statue, is another small shrine room where you find a tiny cross-legged Buddha statue covered with a huge cobra figure and murals belonging to the Kandyan period. It is believed that this cave was converted into a temple over 200 years ago.

Legend has it that Fa-Hsien, a 5th century Chinese travelling bhikkhu, had visited this cave during his sojourn in Sri Lanka. Fa-Hsien who was on his way to Sri Pada (Adam’s Peak) is believed to have stayed in the cave for a short period. The probability of this happening is high as there was a pilgrim route to Sri Pada along the river that flow past this cave. The name ‘Pahiyangala’ is also a reflection of this factor.

Believed to be inhabited by Stone Age people centuries ago, the Fa-Hsien’s cave is known as one of the most ancient human settlements in Asia. The cave attracts many visitors including local pilgrims, foreign tourists, archaeological researchers and students as this is an ideal spot to get the glimpse of the country’s past while enjoying a leisurely picnic.

The dimensions of the cave are recorded as 285 feet in width and 175 feet in height. Located 400 metres above sea level, the cave rises majestically above the nearby forest covered peaks.

The entry cave, which is semicircular, is not only regarded as the largest cave of Sri Lanka but is also said to be among the largest natural rock formation in South and East Asia.

Archaeologists from the Department of Archaeology, in collaboration with archaeological researchers from the USA carried out the first excavation in the main rock cave of Pahiyangala in 1986. During their excavations, they unearthed a wealth of artefacts, fossils, human skulls and skeletal remains, which have been sent to USA for further research. The pit of this excavation is in the middle of the main cave.

Following the 1986 excavation, archaeologists have continued to research the site from time to time. However, what has emerged as exciting is the discovery of a new skeleton in a new excavation site carried out in 2012, under the supervision of then Deputy Director General of the Archaeology Department, Dr. Nimal PererArchaeology Department

The skeleton was among the finds that date back to the prehistoric age. The fact that it was the first time an undisturbed skeleton was found in the cave enabled the Oxford University team to conduct advanced scientific research; leading to the conclusion that full skeleton was that of a woman aged 20-30 years, above five feet in height who would have died 10,000 years ago. It is said that the skeleton was the tallest found from South and East Asia.

Researchers say the excavations revealed many clues to the time frame of the history of Pahiyangala cave, which dates back to 37,000 years. The latest findings will provide vital information to establish the period of the human settlement of this prehistoric habitation.

At the foot of the Pahiyangala hermitage, with several Samanera bhikkhus, learning Buddhist doctrine in the Pirivana with the help of the Chief Incumbent, the experience of visiting Pahiyangala is definitely a trip down the corridors of time. 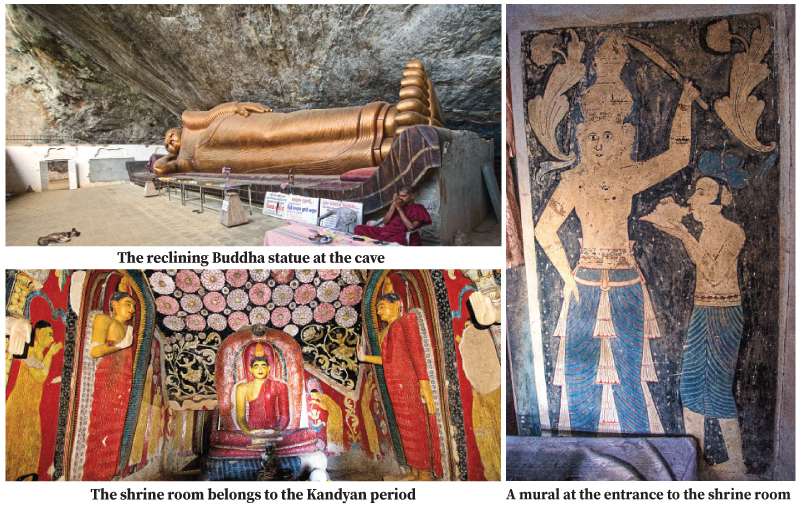