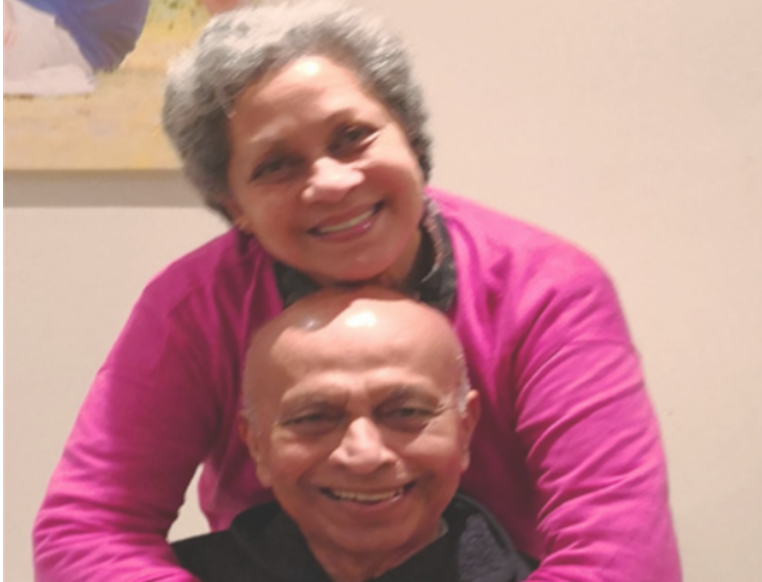 
Tulsi, my dearly beloved wife of 52 years, mother of three, grandmother of nine, departed her earthly existence on 11 August 2021. She breathed her last as her son, Sumal, daughter Dilukshi, and I were holding her hand and silently praying that she be spared to enrich and grace our lives a little more. Our elder son Harsha unable to travel from London, (due to Covid restrictions), where he has been residing for the past twenty years, was there in tearful spirit and visible, thanks to that marvel of modern technology called “FaceTime”.

Whether it was due to an act of divine intervention, or my karmic credit balance that I carried over from a previous birth, it was my life’s ultimate achievement, blessing, and privilege, to have shared my life with this wonderful woman I had known from the time she was born. She was the youngest daughter of my late maternal uncle Hinton, someone for whom I had unconditional affection. My uncle Hinton and his family left for Singapore in 1954. He had a five-year assignment in the Ceylon Embassy in Singapore. Onthe day of their departure by ship (the SS Canton) I was stricken with measles and in bed, and unable to bid the family farewell. Tulsi was barely 4 years old at the time and as a fond cousin gave me a farewellhug before departing. On arrival in Singapore, it was discovered that she had contracted measles!

Fast forward to 1960 when the familyreturned to Ceylon, and Tulsi yet a child of 9 or 10 years. On the family arriving to their home, which was two doors next to our own home (we shared a common ancestor in my maternal grandfather who constructed 4 houses in adjoining blocks in 1910), Tulsi was growing into a real beauty and during her teens I just could not take my eyes off her. “Love thy  neighbour as thyself” said the Bible; and love my neighbour I did! My courting of her won the approval of her parents, and we married on 20 August 1969 when she was 19 years of age. I simply could not believe my good fortune when I won her hand, which was like winning a multi-million-dollar lottery for me.

In fact, in later life in Sri Lanka I always turned down the relentless offers of itinerant sweep ticket sellers, by telling sotto voce to whoever was with me at the time, that I had already won the lottery. Tulsi’s beauty was not confined to her good looks. She had a golden heart, always caring for others, always helpful, and never ever a word of criticism of anyone. An episode concerning a good friend who was a victim of her husband’s infidelity comes to mind. The friend was the innocent party but was isolated and victimised to the point of utter desperation.

Tulsi in her own unobtrusive way, provided comfort and solace to her friend and saw her through her ordeal by providing not only the arms of friendship and emotional support, but with real assistance in the form of accommodation. However, Tulsi never uttered a bad word about the husband of the friend, nor did she speak a word about it to anyone else. That was typical Tulsi, genuine in her friendship and showing absolute lack of guile. Her genteel upbringing of our three precious children, without ever having to smack them for any misdemeanour, influenced me, beyond belief.

Ask any former schoolmate of mine, and they will tell you, that in school I was simply a wild, mischievous, youngster devoid of any aim or ambition in life. All that changed radically after my association with Tulsi, and I allowed myself the luxury of setting goals and achieving them. Before I married her, I set my sights on obtaining an external degree in Sociology from the University of Peradeniya. Given that I did not have the opportunity of attending lectures, it was going to be a monumental task. Her encouragement, and the genuine inspiration from her, saw me pass the honours degree successfully. That change in my life I owe entirely to her. I just marvelled at her kindness and empathy. For instance, she never ever dyed her hair saying that it was not her style, and that she did not believe in embellishment. However, when I was in my fifties my own vanity pushed me to using a dye on whatever hair was left on my head! Never did I hear a word of dissent.

Our three children Harsha, Sumal, and Dilukshi have inherited those wonderful qualities, and in turn passed them on to our nine grandchildren who without exception, display the same generosity of spirit, the kindness and care for others. A selfless person if ever there was one, Tulsi gave most of what she earned to charities, she just wanted to make others happy, and never was concerned about her own personal needs. Her devotion to her family was legendary, being personally present at the birth of all her nine grandchildren in Sydney, Melbourne, and London, and making herself available to provide love and affection to them at any time. She was “on call” 24/7 to them!

Tulsi’s wonderful nature, her care and compassion, has touched the lives of so many. Everyone who had the good fortune of knowing or meeting her will testify to the goodwill she radiated. When the Ceylon Society of Australia was formed in 1997, Tulsi, who had no real interest in matters antiquarian, gave its foundation members all the support she could muster. Many of the early members were drawn in by her magnetic personality and disarming smile. She set the pace for the post meeting suppers by producing some mouth-watering Sri Lankan snacks, helped by a small coterie of friends who joined in unasked but willingly. Among the small band of her friends who rallied round her voluntarily were the late Dr Nalini Kappagoda, the late Lakshmi de Silva (wife of my former classmate Dr Lakshman de Silva), Lena Wijeratne (wife of late Dr Don Wijeratne), the late Inez Sourjah (wife of late Dr Robert Sourjah), and the late Srini Peris (wife of the late Tony Peris). In recognition of her services she was appointed a Life Member of the Society at the 10th Anniversary meeting held in 2007. That unique honour rested with her very lightly, and never in her life had she spoken about it to anyone, including her children, who were taken by surprise when I mentioned this a few days ago. Tulsi’s culinary skills and her skills as a dressmaker are well known especially in Sydney where we lived for 30 years and where she built up a substantial network of clients. She would design and produce outfits for an entire bridal group including suits for the groom and groomsmen, bridal trousseaus, and on one occasion for an additional eight bridesmaids as well. I record with pride the fact that she was responsible for the bridal outfits of all three brides at the weddings of our three children. For her it was simply an act of motherly love. When she gave up sewing to spend more time with the family, she passed on all her sewing work to someone she had never met. She just wanted to help someone, just anyone. In fact, one evening when we were at a friend’s Christmas party, a lady walked up to our table and asked “is Tulsi here”? When I pointed her out, she embraced Tulsi for the kindness shown to her by passing all her dressmaking clients on to her. The countless tributes paid to her memory by friends, relations, and dressmaking clients have appeared on many social websites as testimony to her extraordinary personality. It was a remarkably happy and contented life that we lived, devoid of unnecessary luxuries but always giving priority to making those near and dear to us to enjoy their connection with us.

I have been fortunate enough to have known and loved this most unique and unforgettable partner in life, to whom I owe a deep debt of gratitude. She will live in our hearts forever, and not a minute shall pass without thinking of my dear, departed Tulsi.

She is survived by me, her mate for 52 years, her precious children Harsha, Sumal, and Dilukshi, much loved daughters in law, and son in law Manoji, Naomi, and Pavi de Alwis; adored grandchildren, Liam, Miles, Tiyahni, Eva, Heiran, Kallin, Finley, Elle, and Jamie; her cherished sisters Rohini and Damayanthi and their families. Her dearly loved parents Hinton and May,
and her much loved brothers Nihal and Yasa, predeceased her.

My precious Tulsi
In the sweet by and by
We shall meet on that beautiful shore.
Your devoted
Hugh Aiya

TULSI KARUNANAYAKE:
The loss of a lady with a genteel personality

I did not have the privilege of knowing Hugh at Royal College as I was senior to him at our alma mater. I joined in the mid-forties, and Hugh, a year later. On my frequent visits to Sydney, to see my elder sister, I started my association with Hugh and Tulsi. The bonding grew stronger and stronger over the years. I found him to be a person with an intimate knowledge of Sri Lanka, its history, culture and its antiquities, which is rare to find these days. During these long conversations I began to learn so much, and which I enjoyed so much. It was on these occasions that I got to know Tulsi for the first time. I was struck by her simplicity, graciousness, and the affectionate way she looked after her visitors on every such occasion.

As I chatted along with Hugh, she never did allow me to leave without having a meal. All these attributes were the ones that endeared her to all those who came to know her. On one occasion she told me about her brother who was in hospital for a long time and requested me to try and visit him on my return back to Sri Lanka. I made it a point to comply with her request. On meeting him having conveyed her loving regards I asked him to talk to her on my mobile phone.
She deeply appreciated my gesture.

Hugh will find it extremely difficult to be without her, she was always by his side. Their long steady meaningful marriage stands ample testimony to this. During the last few years when he cared for her, and earlier this year when she entered a nursing home, he visited her daily, and on each of those visits he put her in the car and drove around to enjoy the scenery. He told me that he was getting ready to move into an apartment close to her nursing home, so that he would be able to spend more time with her. That was Hugh’s loving affection for her, and I am confident that the
children will fill the berth left behind by her loss and give him the comfort and company he will need so much. May Tulsi attain the supreme bliss of nirvana.