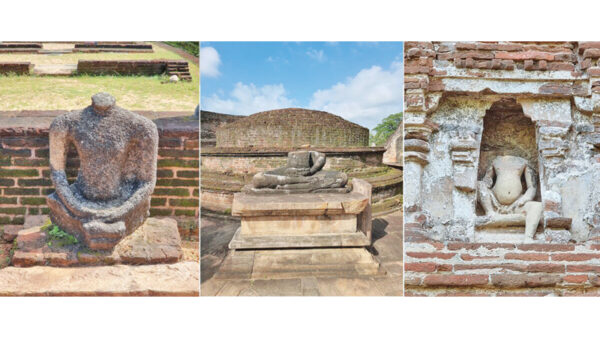 Artefacts stolen from the ancient Kotawehera Rajamaha Temple in Sri Lanka are the latest victims of longstanding looting and trafficking of cultural treasures in the island.

Impacted cultural heritage in Polonnaruwa, left to right: A beheaded statue; one of the four “Seated Buddhas” surrounding the Vatadage in the Sacred Quadrangle; a headless dwarf adorns the exterior walls of the Thivanka Pilimage (Image House). (all photos by and courtesy Emiline Smith)

When the temple custodian of the Kotawehera Rajamaha Viharaya in the Rambukkana town arrived for his daily rituals in the early morning of February 12, 2022, he immediately noticed something was off. Upon entering the temple, the glaring hole in the glass display case confirmed his suspicions. Several precious items were missing, including five golden caskets and three crystal caskets.

The Kotawehera temple is one of the oldest such remaining structures in Sri Lanka: The building and its artefacts are used in daily worshipping and rituals and play an important role in local myths and stories. Director General of the Archaeology Department, Professor Anura Manathunga, stated in an interview with a local TV station that the stolen caskets are of high national and religious importance and that he is highly worried about their safety. He has requested those involved in the theft to return the artefacts considering their value.

“We believe that these caskets might have been brought to Sri Lanka during the period of Arahat Mahinda,” he told a local TV station. The stolen caskets were first found during excavations carried out in 1956 and 2000.

The Archaeology Department said carbon dating tests carried out on the casket discovered in 1956 have revealed that it dates back to 250 BC. Historical records reveal that Prince Keerthi Tissa had built the Kotawehera Rajamaha Viharaya during the reign of King Devanampiyatissa. The oldest evidence of silk in South Asia was also discovered from this site. Three police teams are now investigating the theft.

The Sri Lanka Police and the Criminal Investigation Department (CID) have offered a monetary reward for the caskets’ return, but to date, they are still missing, with no information forthcoming.

The stolen caskets are the latest victims of the longstanding looting and trafficking of Sri Lanka’s cultural heritage. They are some of the finest examples of the rich artistic heritage of Sri Lanka, to be found all across this small island nation off the southern tip of India. The country is home to several cultural UNESCO World Heritage Sites, covering exquisite ancient cities, forts, and temples, all housing innumerable artefacts.

Former Director General of Archaeology Senarath Dissanayake claimed that there are over 250,000 historic sites on the small island of 65,610 Sq Km. “The highest density in the world.” Moreover, Sri Lankan waters contain numerous shipwrecks. The sheer number of sites and artefacts makes effective protection of underwater and land-based cultural heritage extremely challenging.

Ever since Western intervention started by way of the Portuguese (1505-1658), Dutch (1658-1796), and British (1796-1948), these cultural objects have been exported en masse. This has resulted in large foreign-held collections of Sri Lanka’s diverse cultural heritage; a search of the Dutch National Museum of World Cultures collection, for example, returns 1,680 objects originating from Sri Lanka, including invaluable Buddha figures, worshipping tools, musical instruments, coins, and jewellery. Within Sri Lanka, such colonial looting has led to beheaded statues, broken Stupas, and incomplete temples strewn across the country.

Tourists have become accustomed to seeing such visuals without asking critically the role they themselves, as well as their ancestors, have played in the loss of the nation’s cultural heritage.

Because of this international demand, the island has a long history of so-called treasure-hunting: Folklore stories speak of riches hidden in Stupas and temples, and the search for gems, metals and other valuables has resulted in the large-scale destruction of these structures. According to Sri Lanka’s Archaeology Department, a total of 231 instances of destruction, unauthorised excavation, and theft of archaeological objects were recorded in 2021. According to its staff, this number is believed to be only a fraction of the actual number of incidents and seems to be increasing each year.

Sri Lankan authorities have previously been vocal about the return of foreign-held cultural objects, for example, when Bonhams auctioned an Anuradhapura-era moonstone in 2013. Advertisement of the 10th-century moonstone generated widespread public outcry for its return, but to no avail: It was eventually sold for over half a million British pounds (US$ 658,540) at one of Bonhams’s London salerooms. Sri Lankan experts now believe that the moonstone is a replica.

Effective streamlining of cultural heritage protection efforts in Sri Lanka have been prevented by a raging civil war from 1983 to 2009, terrorism attacks (particularly the Easter bombings in 2019), and financial crisis. Cultural heritage is always vulnerable, but particularly in times of major political or social instability or during serious economic decline, when some turn to looting in the absence of alternative sustainable livelihood options. Both apply to Sri Lanka today.

Meanwhile, international support — particularly from the country’s former colonisers — to protect Sri Lankan heritage is lacking completely. Although private and public institutions have benefited for decades from the cultural heritage in their collections, no proactive effort is made to address the problematic histories of foreign-held Sri Lankan cultural objects, much less orchestrate their potential repatriation or collaborate with in-country experts to facilitate knowledge exchange and restore agency and access.

Today, the onus is still on archaeologically-rich countries to protect their cultural heritage; instead, it is the demand for cultural objects that should be held legally and morally accountable on a much larger scale. Reactive provenance research is not nearly enough. Proactive measures should be taken to support archaeologically-rich nations such as Sri Lanka to protect its heritage, guided by local needs.

This should include the intellectual property associated with these looted cultural objects: Visual representations of cultural objects, including photos, online media, reproductions, and others should not live separately from their original object without the approval of their rightful owners.

Other Asian nations have harnessed civil activism to increase the protection and repatriation of their nation’s heritage: for example, the Lost Arts of Nepal social media account, together with the activist-led Nepal Heritage Recovery Campaign, has effected the repatriation of dozens of Nepali cultural objects in the past year alone. The India Pride Project similarly plays an essential role in the repatriation of India’s looted cultural heritage and holding the market accountable for the tangible and intangible harms associated with the trade in cultural objects. The establishment of a Sri Lanka Pride Project is now underway to accomplish similar results.

A beautiful golden statue of the Goddess Tara, an important figure in Buddhism, graces the office of Professor Manathunga. He fondly looks at her, telling me the original version welcomes visitors to the Asian Galleries of the British Museum. He dreams of welcoming her home, back to Sri Lanka one day.