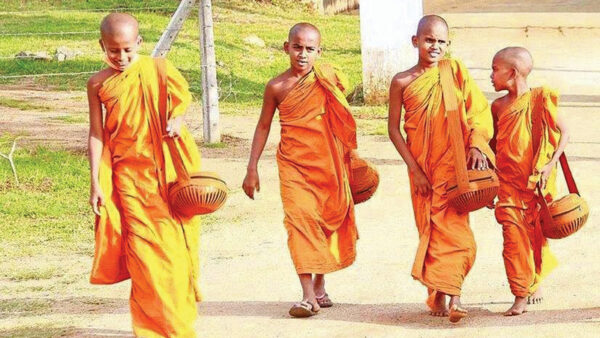 Novice monks at the Pirivena

In the early hours of Tuesday I set off with my colleagues from our sister newspapers Silumina, Dinamina and Thinakaran to discover an ancient Sri Lankan monument deep in the dense forest of Mullaithivu. We travelled for hours passing many rural areas. Villagers were harvesting their crops and new paddy was put to dry on the side of the main road. We passed Padaviya (ancient name Padirata) by evening and shortly reached Weli Oya. Our vehicle stopped at a Pirivena (a Buddhist school for junior monks) which was nestled across the serene Kiriibban Wewa (lake). The view of the still waters was refreshing.

This Pirivena is known as Shri Thilakamithra Mulika Pirivena. The resident chief monk Ven. Pimburaththewe Santhirindhiyalankara Thera greeted us. He explained that there were 23 young novices undergoing training to become ordained in this quaint village. The young monks surrounded us and we were blessed by their innocent smiling faces.

Amidst this remote village these junior monks faced some challenges. Jagath Sumathipala had assisted them through the Bauddhaloka Foundation for which the clergy were thankful. The Pirivena is in need of a classroom (hall) and those interested may come forward to assist this humble Buddhist school and enhance the welfare of the student monks. After sometime we left for our overnight stay.

The next morning we set off to Mullaithivu. This is a vast area dotted with clusters of palmyrah trees. We travelled via Pulliyankulam and Nedunkerni. From the main road (at Kumilamunai) we took a turn to a sandy rough road, a distance of 14 kilometres to our venue. The drive is demanding, but this is the real essence of a journey of discovery. We passed herds of cattle and goats. A lone tusker is said to roam this wilderness. Soon we were within the Kurundumale Forest Reserve, an area covering a staggering 400 acres. A name board with the words Kurundumale Archaeological Reserve was visible. We halted here and met up with Kapila Senadheera, from the Department of Archeology- Vavuniya Office. To our right side there is a lake called Thannir Murrippu – meaning water breach in Tamil language. Within minutes we began our trek using a rough foot path. The ground was strewn with leaves and protruding tree roots, and I observed some rock stones which had once served as markers on this path. Birds flew within the lush foliage. We had climbed about 120 feet and the voices of people were heard. The side view of this ancient Kabook edifice was quite imposing. Workmen were engaged in the ongoing restoration. The summit of the hill and surrounding areas is said to cover 20 acres. Centuries ago the view from this summit would have shown lush fields and a beautiful lake.

After a short rest Kapila Senadheera explained to us about some of their findings within this site. The ancient Buddhist temple is said to be the only one of its kind in Sri Lanka built fully out of Kabook. For decades it had been concealed, fully covered with sand and trees that had obscured its view. Thankfully nature had protected this important historic site. The monument and adjacent area had once extended to cover about 75 acres. The Stupa rises to a height of 45 feet and is built to reflect the Padmakara style (lotus flower). How it withstood this long in a thick jungle is a miracle. The valuable historic site also survived the three decade war without any harm, although some treasure hunters had dug randomly in this area seeking valuables. This is the selfish ignorant attitude of some and must be severely condemned.

It is recorded that in 1895 the Government Agent of the Northern Province, Penry Lewis made mention of this site in a report on the Vanni region. The hill was called Kurundumalai in Tamil and Piyangala in Sinhalese. It is said that in 1905 H.C. Bell (Commissioner of Archaeology) had mentioned this important site in his report the Archaeological Survey of Ceylon (North Central- Central – Northern Provinces).

According to oral tradition the temple was called Kurundavashoka Vihara and Kurunduveli. It is opined that Kurundavashoka is the shortened form of Kurundavapi Ashoka. According to Buddhist scholar Ven. Ellawela Methananda Thera who has been closely associated with the restoration initiative at present, assumes that the Kurundi Atuwa (ancient Buddhist book) had been written from this temple centuries ago, thus reflecting in its name. He also opines that in its glory day at least 500 monks may have been at this location. Records indicate the Kurundavashoka Monastery area was declared a protected archaeological site by gazette 7981 of May 1933.

An ancient king named Khalatta Naga had built this monument (109-104 BC). He was the third son of Saddha Tissa. The temple had been duly enhanced by King Agbo 1 and King Vijayabahu 1, when they worshipped here. We noticed the pillars to be monolithic and built with gneiss rock. The remains of the Vattadage (circular relic house) with about 12 pillars is still visible. The Pilima-ge had once rested on a platform measuring 85 feet by 64 feet. We walked amidst the trees and Kapila led us to a large Pokuna- which had no water at present. This would have been about 60 feet by 80 feet, we couldn’t discern its correct depth. It must have held so much water when this site was occupied, which explains the assumption that 500 monks were here. In his report Government Agent Penry Lewis also states that an ancient village named Kuruntanur was also in this area. Another point in the 1905 Archaeological Survey of Ceylon by H.C. Bell stands out to capture the mind of those keen in archaeology. He mentions about two flights of steps. One is from the summit to the terrace- a flight of 18 steps. The second is a grand staircase of 100 steps, cut out of stone. As per the report the flight of steps “descends the hill unbroken to the forest below”. These steps connected the monastery to the city below. I inquired about this from Kapila Senadheera (Department of Archaeology) and he confirmed the existence of a staircase, and that it is buried, but some small parts of it have been found protruding from the ground. As the excavations are ongoing the team remains optimistic of finding this ancient stairway. Kurundumale has many mysteries to be revealed.

Another person faithfully associated with the excavation and restoration of Kurundumale is Chairman of the Bauddhaloka Foundation, Jagath Sumathipala. He has donated much time and money to preserve this Sri Lankan monument. Archaeological restoration takes time. At this juncture I must point out that all places of religious worship must be respected, sans political influence. The Nagadeepa Vihara draws Buddhist and Hindu devotees. Likewise the magnificent Nallur Kandaswamy Kovil in Jaffna also draws Hindu and Buddhist devotees. The Kataragama Devale is venerated by Buddhists and Hindus. Therefore the Kurundumale Vihara is duly open for all Sri Lankans to visit. Let it be a radiant oasis of worship that unites the Sinhalese and Tamil people. This is a historic Sri Lankan monument and part of our nation’s rich heritage.