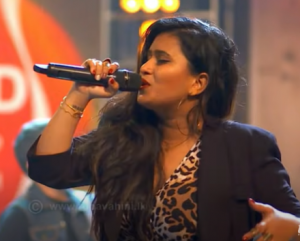 Tehani Imara is renowned as a singer,lyricist,musician,performer but after she is qualified in Master of business administration, MBA marketing/marketing management general was elected to the prestigious post od Director of National Youth Services Council(NYSC) at a very young age.

Tehani was born in Saudi Arabia had returned to Sri Lanka with his parents and only brother at the age of twelve years.She had been heavily handicapped as her knowledge of the vernacular Sinhalese was very weak as he had studied with Arabs in Arabic schools.Both her mother and father could sing well, father had been a musician playing drums.It is learnt that when her mother was pregnant expecting her, she had pleaded to have a daughter who would love dancing. Tehani too had through hereditary affiliations had acquired innate singing skills.In addition she had evolved dancing aptitudes naturally through inborn talents.

It had taken a few years for Tehani to master the Sinhala vernacular having had an education in English and Arabic. Although music was in her blood her desire was to get educated to unprecedented statures giving music the second spot. After leaving school she had joined NSBA to do Higher National Diploma in Marketing between the years 2014 to 2016.Simulataneously she followed CIM and PCM (marketing) at the SLIM.Thereafter Tehani had studied a two year course at “Saegis” a private campus university to study Higher National Diploma. Thereafter to further qualify Tehani had entered university of Bedfordshire Business school in UK for a Marketing Management general and Masters in Business Management completing in year 2019.

Having notched up the above prestigious qualifications was elected as the Director of National Youth Services Centre in Magharagama where she is utilizing her immense knowledge to uplift and rectify areas which urgently needs attention. As a statutory body to be actively involved in youth affairs, implementation of various development programs of the council. For Tehani as a youth the post of Director gives her the ideal opportunity to resolve many vital challenges confronted by  youth by conducting workshops at provincial level with the NYSC branch network.

But in the meantime Tehani continues her passion for singing and dancing.She has been invited to many chat programs in many television channels for which she somehow allocates her time as her passion. she need to show case her talent to vibrant audiences.Tehani had lamented that she has had to face many bombardments during her early singing career somehow she had resisted as she had some very close friends to console and advise her in the meantime giving  her a morale booster. There are many songs that await release been delayed owing to the Covid-19 catastrophe. Tehani had been dominating in the commercial field singing and voicing for many gingals ,had been rather busy even during the lockdown periods.She had featured in mashups in the Red Coke SLRC program recently, did successfully for ‘Dance Monkey”, also in “living in blooper life” etc.

Tehani during her not so long tenure as Director at NYSC had touched on many vital areas where youth are confronted needs urgent redress. Had resolved many issues under her initiative and leadership through workshops carrying out having listened to the grievances of especially the youth.One area she and her team focus very seriously are the ruthless manner fictitious posts many  with even edited photos are made as Facebook posts and other social media platforms to hurt many by unscrupulous persons who have no other work to attend.These fictitious submissions had made many innocent personnel to emotionally agonise .This practice she and her team have given serious thought to, not only to end but also to punish them after formulating laws. Even those sharing such posts would also be bought to book to end this inhumane conduct. She is adamant she could bring a stop to this merciless nuisance, is learnt that preliminary work of preparing documents have been completed, the  cabinet decision is pending.This type of initiative really should come from the legislators in the parliament. Tehani is very confident that she would triumph in this very vibrant issue.This would boost Tehani to continue with comparable tasks for the benefit of all citizens.May she be blessed with courage in discharging her duties as  Director of NYSC and also for blossoming of her singing career.