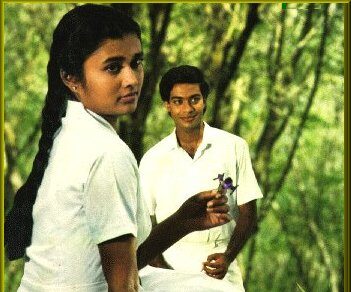 Golu Hadawatha was a popular 1968 Sinhalese Language romance movie directed by Maestro Lester James Pieris with Wickrema Bogoda and Anula Karunatilleke portrayed the lead roles of Sugath and Dhammi  The movie’s story  built on the novel Golu Hadawatha written by Karunasena Jayalath in 1962, based on his school time experiences and memories. The movie departed from the then traditional movie style: no hero, heroine, no enemy or villain, Joker, no songs, fights etc. Based on a romantic and emotional attachment between a teenage boy and a girl who study in the same class in their school. After two decades Maestro Lester James Pieris wanted to reproduce the Golu Hadawatha as a teledrama.

Sudaraka ‘s father’s Production of Hunuwataye Kathawa had begun as a play in year 1967 when Sudaraka was not born. About five kids had portrayed that role which was sans any dialogues. Sudaraka Had been the fifth Ladaru Micheal Kumaru in the play. The play which is still staged the Micheal Kumaraya is the 18th or so.Sudaraka recollected that when he was very young, he was thrilled when the ‘Natya” bus arrived at their house to load stage sets. He too loaded into the bus small items which he could barely carry.He recollected the journey in the bus which the crew travelled as adorable where the actors and actresses sang and displayed comic items.Sudarak recollected there had been an elderly person to look after him who was addressed as ‘Amme’.Sudaraka did confess that he had memorized the lyrics of the play as time progressed.There were times as he grew when someone was absent, he was asked by father to portray a role. Of course, Sudaraka recollects he had also took part in chorus singing.

Sudaraka is the only child of the legendary duo Henry and Manel Jayasena was educated at D.S Senanayake College ,Colombo initially lived at Flower Lane Nugegoda .His wife Anoma Jayasena nee Herath’s ancestral place was Kandy.Her father employed as a Police officer was on a transferable service.She had studied in the Montessori at Welimada then up to grade three in Nugathalawa close to Welmada thereafter she had studied in Kandy at Pushpadana Balika Vidyalaya .By sheer quirk she gets an opportunity to portray a lead role in a teledrama Golu Hadawatha.One of Anoma’s photos had got published in a Sinhalese newspaper.Sumithra Pieris having seen it had sent a letter to her to come and meet her.After having faced to three interviews Anoma had been selected to portray the role of Dhammi in the proposed Golu Hadawatha teledrama to play  the role which Anula Karunatilleke did in the film released in year 1968 as Dhammi.This unique opportunity for any young girl was indeed massive. The strange thing is Anoma had added that she had not read the book or seen the film, only at the interview she had known of it.She added that it was a huge challenge for an absolute novice ,also had feared to participate.

During this period while studying at D.S Senanayake College Sudaraka had been involved in a College carnival organising,where it had been proposed to show some films to commemorate DS.Senanayke.The organisers had wanted to show some films in the auditorium.Sudaraka had sought assistance from father who had spoken to Lester James Pieris had arranged for some film reels.Sudaraka had visited Lester James Pieris’s residence with mother Manel Jayasena in father’s 5 Sri Moriis minor car.Before they left Madam Sumithra Pieris had said she is planning to do a teledrama would you like to portray a role to which Sudaraka had nodded showing no dissent. She had said Sudaraka will have to subjected to a screen test etc.Sudaraka had told about this story to father Henry Jayasena who had said do not take this seriously as this may or not  happen just be yourself.Anyway after about three months Madam Sumithra  had  contacted him.Sudaraka had been asked to read a few lines from the script in front of a camera which he had done properly to convince her. After three days Sudaraka had been conveyed the fantastic news that he had been selected,

Sudaraka had seen Anoma  ( Sugath and Dhammi)  at the Mahurat ceremony held at a HNB branch,.The shooting had taken place in  Piliyandala Madhya Maha Vidyalaya,.For the reproduction of Golu Hadawatha portrayed by two versatile acclaimed duo Wickrema Bogoda and Anula Karunatilleke.The shooting had taken place while the school was functioning not on a holiday period for the very reason that a few school girls and boys had been deployed for certain screen captures. Sudarak and some boys were housed in the school itself while Anoma and other school girls had been housed in a boarding house in the close vicinity. The duo during shooting had to get up early dressed in the relevant school uniforms by the time the students arrived in school ,the situation Sudaraka termed as ‘sundarai. It should be mentioned that several future versatile actors and actresses had portrayed roles like Sangeetha Weeraratne,Roshan Pilapitiya,Channa Perera,Ruwanthi Mangala.Nalin Mapitiya who had been a student in Piliyandala Central had also portrayed a role.The shooting had gone on for just over three months which had commenced after Sudaraka had sat for his advanced level examination. The last scene shot was that in a carnival scene at Royal College where they had a carnival.After the Golu Hadawatha was telecast all audiences had come to know who Dhammi and Sugath were.

Usually after a teledrama is shot and telecast the actors and actresses disperse.However in this instance case the duo Sudarak and Anoma had been offered jobs by the producer of Golu Hadawatha at the prestigious Hatton National Bank Ltd. Sudaraka and Anoma were posted to two different branches the former at head office the latter at the Bambalapitiya branch.The duo had been talking to each other over the phone. As everyone knows there were no mobile phones then in the early decade of 1990.During a telephone call it was suggested that the duo should buy a present to the legends Lester James Pieris and Sumithra Pieirs after receiving their first salaries.At that time Anoma had been lodging at her Loku Amma’s place in Kalutara.The duo had met at Kollupitiya to visit Liberty Plaza to buy a present as arranged.After which the duo had enjoyed a milk shake drink.It was added that during shooting an assistant director had strongly warned and advised all artistes to behave well as it was a school where discipline had to be maintained to unprecedented tall heights.Still the duo had not been to convey what was stored in the minds. Sudaraka had been subsequently transferred to a new branch in Rajagiriya which was sans a land phone.The manager had been provided with a ‘celltell” termed ‘gadol bage’. Hence it was simply impossible to take a call to Anoma.Sudaraka used to visit a communication next to the branch after lunch daily to call Anoma. It was during this time Sudaraka had conveyed about his love to which Anoma had asked to give her three days.But owing to the anxiety before the three days Sudaraka had asked for a word though he knew it was already a foregone decision and conclusion. The duo had not got exposed to the public.However In the Times paper in a ‘gossip’ column someone had hinted about the relationship without mentioning names. 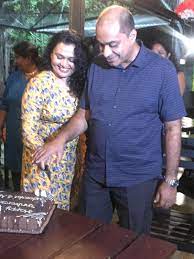 Sudaraka very prudently had brought this issue to the knowledge of the parents.Henry Jayasena his father had very diplomatically written a polite letter to Anoma’s parents about the stand of the duo.Anoma after marriage in year 1994 had come to live with Sudaraka;s parents.She had been very happy as for her the parents’ duo posed no worries as it was for her just like home Even before marriage Anoma had been invited to go on trips etc Anoma had not been allowed to cook but she had rendered help in small measures. The duo had lived only for six months with the parents had shifted to a separate dwelling as it was prudent to commence a family early.The duo are blessed with two sons aged twenty  four and twenty one  are married for twenty eight years.The duo admitted that like all other families they too  have arguments and quarrels.Anoma quipped that she remains silent when Sudaraka loses temper.Sudaraka accused Anoma for not talking for days after such a conflict. Sudaraka conveyed that he used to emulate his parents which he had experienced when he was a bachelor. But after these long years Sudaraka had made her to speak coming to a compromise by apologising..Sudaraka according to Anoma cannot do any domestic work other that washing of clothes of all family members which is a tough assignment. 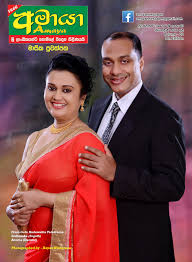 It was revealed in an you tube interview with Kelum Wijesuriya also an employee in Hatton national Bank in his program “Perfect Match”.To live for twenty-eight together as a couple is  very creditable. They too like others have their ups and downs.Sudaraka says if he is satisfied sixty percent of his wishes come through for which  he is overwhelmed. However, they duo is having a contented family life.The sons have taken part in grandfather Henry Jayasena’s plays as the little prince but although they have talent the duo does not like to pursue a career. The two had acted in  roles in stage plays like ‘Thawath Udesanak” of Henry Jayasena, where the younger son had portrayed the main character. The elder son had participated in a documentary of Sigiriya Kassapa but had not prolonged a career in acting. Sudaraka owing to his busy office schedules as an executive officer had participated in a few minor portrayals in a few films but he too had not pursued a career. Anoma too had portrayed small roles in about eight teledramas but she too owing to bank responsibilities and children’s issues she too had not accepted any new roles.All fans would no doubt wish Anoma and Sudaraka the best for their banking careers and family life.

The above are excerpts of the you tube interview the duo had with Kelum Wijesuriya in Perfect Match”.