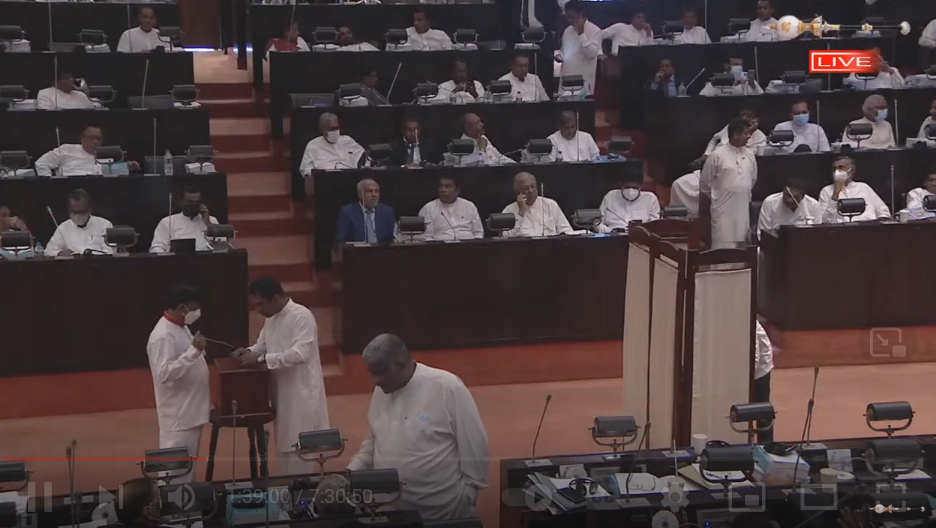 ECONOMYNEXT – As the month of May dawns Sri Lanka’s current turmoil is turning more complex as opposition to the government led by President Gotabaya Rajapaksa broadens and deepens.

The farcical “election” of the Deputy Speaker on May 5 has exposed what we always felt that the so called “independent group” within the government, the Sri Lanka Freedom party caucus and the Vasudeva Nanayakkara led 10-party alliance remain very much in the Rajapaksa camp.

Rebels in a twist

The veteran Jaffna MP M A Sumanthiran tweeted that their purpose is to delay the No Confidence Motion against President Rajapaksa. They are “exposed” he said.

The rhetoric of the “rebels” which at times was contradictory now appear staged to cool down the heat gathering around the ruling clan.

It is unlikely that Maithripala Sirisena, Wimal Weerawansha, Udaya Gammanpila, Nanayakkara and others would walk the talk.

Instead,they appear deeply invested in keeping the Rajapaksas in power as many of them have cases against them which were inexplicably withdrawn by the Attorney General and could easily be reinstated if a new government bent on cleaning the stables were to be formed.

That the main opposition Samagi Jana Balavegaya (SJB), the Tamil National Alliance (TNA) and other smaller opposition groups stood firm is a credit to them.

It is also almost impossible that SLFP leader Sirisena would make a serious move to topple President Rajapaksa as allegations surrounding the Easter Sunday attacks hang over both of them.

The Presidential Commission of inquiry into the massacre has faulted Sirisena as the then Commander in Chief for inaction that led to the tragedy. At the same time recently, fingers are being pointed at the President and his backers forallegedly orchestrating the attack to ensure his victory at the 2019 presidential election.

This also points to the possibility that the No Confidence Motion (NCM) filed by the SJB has little chance of defeating the government.

There was further indication that the fake renegades would pull the rug from under the Opposition in a letter sent to SJB leader Sajith Premadasa.

The letter was signed by the SLFP, Nanayakkara, Anura Priyadarshana Yapa and the slippery Wijedasa Rajapakshe.

It called on the main opposition to “join the proposed framework for an all-party national consensus government that has been accepted by the Mahanayake Theros, religious leaders, professional organizations, business community, trade unions, and youth activists.”

It added that the SJB could take over governance after defeating the government on the floor of the House. As the SJB “has expressed unwillingness to work with other political parties” the “dissentients” offered to “sit in Opposition and extend critical support in such a scenario.”

The reason offered by the so-called dissenters was that the country was engaged in negotiations with international partners for aid and if anarchy descends all will be lost.

This assertion is laughable as any international observer would note that the bulk of the people have lost confidence in the present regime because its incompetence and misrule has thrown country into an economic and political crisis of unprecedented proportions.

On May 6, the Trade Unions and allied groups are to stage a hartal shutting down the country until the
Rajapaksas quit their positions.

Recently they showed their strength, bringing the country to a grinding halt as they cut across party lines to collaborate to stage a day-long general strike.

The biggest blow to the government came from the Maha Sangha, which had invited the President to step down and handover to an interim government pending fresh elections.

It was a move that showed the Priesthood was more in touch with its flock than the beleaguered ruling clan.

The demand had been led by the Mahanayake Theros of the main Chapters of the Buddhist community, who have now made politicians persona non grata.

The Monks held a Sangha Council in Colombo last week and invited representation from all political parties to meet them to discuss the situation but the Chairman of the ruling Podujana Pakshaya, G L Peiris turned down the invitationsaying Prime Minister Mahinda Rajapaksa would not step down and therefore there was no discussion possible.

Snubbed, the Chief Prelates said they would have no truck with these politicians.

The Buddhist clergy has also decried the government’s decision to play recordings of Pirithchanting outside Temple Trees, the Prime Minister’s official resident to drown out the shouts of the protestors who have gathered there.

Ahalakada Siri Sumana thero told reporters this week this was gross misuse of the sacred chants. “They have weaponized Pirith and we have unreservedly condemned this act,” the Thero said.

The situation is already dire as shortages of food, fuel and medicines still oppress the citizenry and aimless and farcical moves to appoint a “new cabinet” made up of junior politicians has done little to quieten the irate and increasingly desperate people of Sri Lanka.

Their desperation was exhibited in Rambukkana, where protestors surrounded a bowser carrying petrol insisting that the authorities unload the fuel and distribute it on April 12. However, the local Cooperative Society, according to news reports did not do so, without explanation.

Police then took measures to disperse the protest, first firing tear gas and then opening fire killing 42-year-old Chaminda Lakshan and seriously injuring several others. The egregious incident where police appeared unable to judge the difference between protest and insurrection ended with officers of the law shooting unarmed protestors with assault rifles.

It was the most violent incident recorded in this protest campaign against Rajapaksa rule which began earlier in the month.

The Kegalle magistrate Vasana Navaratne ordered the immediate arrest of the officers involved and directed that they be produced before her on the next court day.

The most senior police officer who was in the operation, Senior Superintendent K B Keerthiratne and three other members of the squad were arrested.Court heard that three T-56 rifles had been used and 36 rounds fired into the crowd.

Another development has been the statements given by members of the Maha Sangha. The Mahanayakes of all the leading Buddhist Sects in the country had sent a letter to the government’s leadership asking them to remove the perks given to Ministers and provide essentials to the masses.

A Sangha Convention held recently was to call upon Prime Minister Mahinda Rajapaksa to resign.“This Prime Minister who took power with the backing of the Buddhist clergy is now not listening to the Mahanayaketheros,” he said.

The Monks also asked leaders of all the parties in Parliament to meet with them at the convention.
However,Sobhithathero said the Chairman of the governing party Prof G L Pieris declined the invitation as the PM has no intention of stepping down.

The challenge to Parliament has been to reflect the needs and slogans of the protestors and find solutions within the existing legal framework or change the laws to accommodate the aspirations of the streets.

The replacement of Deputy Speaker Ranjith Siyambalapitiya by himself has been a comic drama.

But outside the House life is grim and the anger of the people is rising. Unless Parliament responds responsibly it will become irrelevant and that would add to the tragedy.

Shades of a pioneer-By David Robson