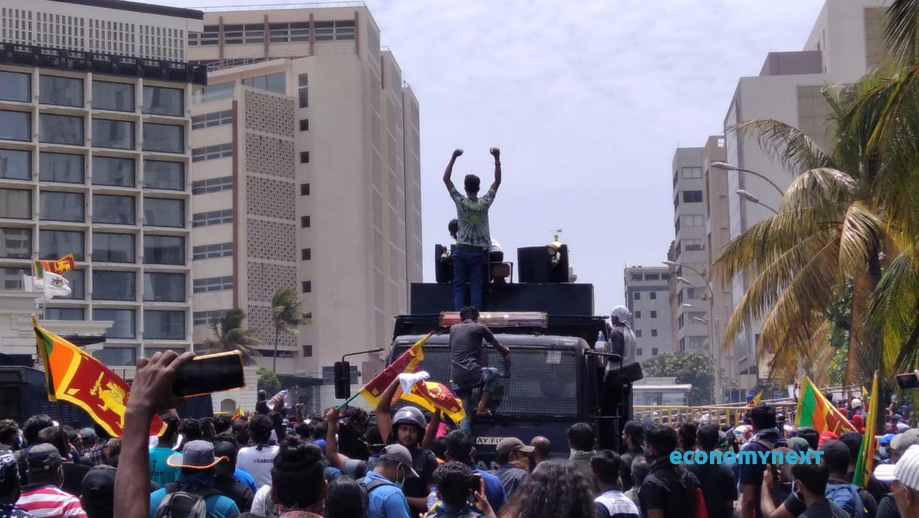 Speaking to reporters on Monday August 01, Wijearatne suggested that five key individuals from the ‘Aragalaya’ (Struggle) protest movement must enter parliament through the national list.

Sri Lanka’s youth have been demonstrating against the government’s handling of the country’s economic crisis since April and their protests saw the ouster of former President Gotabaya Rajapaksa who fled the country on July 13.

One of the demands of the Galle Face protestors is more youth participation in parliament. Wijearatne told EconomyNext that “elderly” members of parliament should resign of their own accord to make way for new personalities with new ideas.

We have ministers that can’t walk and we expect them to be able to run a country. So I make this suggestion in good faith, to give the young generation a chance to have their voices heard.”

“The president must decide which parliamentary seats will be replaced,” he said.

A majority have been asking for elections after President Wickremesinghe was sworn in, the private bus union chief said.

“Even if there is an election under this proportional representation voting system, the youth will never be able to get elected to parliament, because every day it’s the same wine in a new bottle,” he said.

Wijeratne, who is not directly affiliated with the Aragalaya, said he’s making this proposal as a solution to Sri Lanka’s worst economic crisis since Independence. He claimed he has been a witness to injustice and disparity within the system, hence his call for youth leadership in Sri Lanka.

S V Nadarajah, a protestor who has been in the struggle since its inception, is not hostile to Wijeratne’s proposal.

“Most politicians are in their retirement age and there is no inflow of new ideas nor any vision. When the youngsters enter parliament, it will change,” she said, adding that the younger generation is looking to join active politics.

“Sri Lanka is following 74-year-old politics which doesn’t work for today,” she said.

However, not all protestors are interested in entering parliament and working with the establishment. Chathura Bandara, a frequent protestor, said: “Five members of the Aragalaya against 220 existing members of parliament will not, once again, be a reflection of the people.”

One of the main arguments of the anti-government protestors is that the current parliament is not representative of the public and that the present set of rulers are not in touch with the people and their hardships.

Despite some setbacks, sections of the Aragalaya are persistent with their demand that President Wickremesinghe also vacate his office. This has been particularly the case since what critics claimed was an unprovoked attack on peaceful protestors on July 22 when the military allegedly attacked protestors at Galle Face and forcefully evicted them the Presidential Secretariat even after a prior notice that they would be leaving.

“We didn’t come to protest to fill a vacant seat in parliament,” says Melanie Gunathilaka, an occupant at Galle Face who has been protesting since April..

Wickremesinghe was elected president by parliament with 134 votes out of 225. On Sunday July 31, he renewed his call for an all-party government to lead Sri Lanka out of its economic crisis.

A Wall Street Journal interview on Sunday saw him reiterate his call for political stability.

The president has also controversially claimed that the Aragalaya has been hijacked by what he calls fascist elements aiming to destabilise the country. He has pointed to acts of violence including acts of arson and the killing of government MP Amarakeerthi Atukorala as evidence.

Since the protest is a decentralised movement with the participation of a wide array of citizens, said Gunatillake, some may be fond of the idea getting into parliament. But this was go against the core demands of the Aragalaya, she said.

“This is a move to bring new young faces with the bunch of old faces. You can’t have new when you’re surrounded by the old,” she said. (Colombo/Aug01/2022)