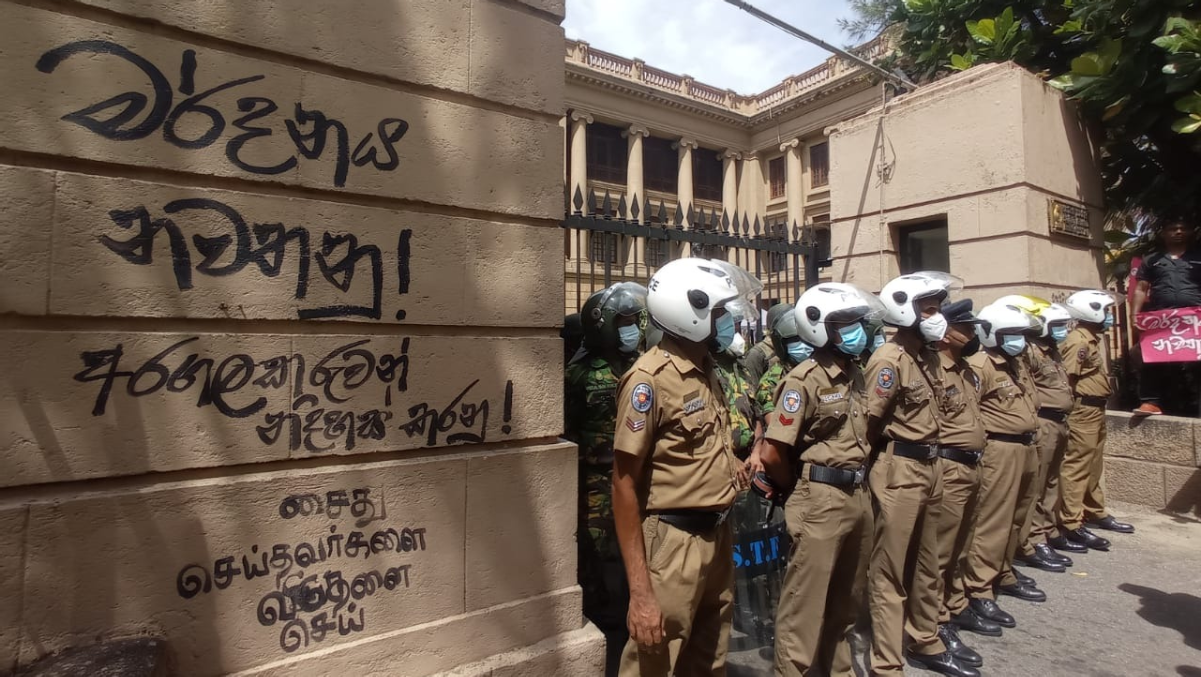 ECONOMYNEXT – Sri Lanka police has arrested 21 protestors at the ‘GotaGoGama’ agitation site in Colombo for obstructing the gates of the Presidential Secretariat and the Treasury building, police said ahead of a meeting with International Monetary Fund (IMF) officials.

“We arrested 21 suspects for blocking the entrances of the Presidential Secretariat and the Treasury building as officials were unable to go in and out of those buildings,” Police Spokesman SSP Nihal Thalduwa told EconomyNext on Monday June 20.

In the early hours of Monday, GotaGotaGama protesters had blocked all three entrances of the Presidential Secretariat. The building’s main entrance had been blocked for over 70 days since the demonstrations began in April, demanding the resignation of President Gotabaya Rajapaksa.

Out of the 21 people arrested, four were women and 16 males including a Buddhist monk. “They were arrested for unlawful assembly because they were obstructing the entrance,” Thalduwa said.

Footage shared on social media showed some suspects being carted off to a police bus. One of them was ordered to be taken to the bus for recording. It is not clear what provisions of the law was used for these arrests.

Thalduwa further said the protestors were also obstructing officials from going to a meeting with IMF officials held Monday morning. Some of the protestors, however, claimed that they had been blocking the entrances since midnight.

They claimed that they had surrounded the gates to wish President Rajapaksa for his 73rd birthday which fell on Monday.

The human rights watchdog Amnesty International has called on the Sri Lankan government to immediately release those restrained. (Colombo/Jun20/2022)

Amid Chinese tourism shutdown, Sri Lanka says flights to and from Beijing to increase