Sri Lanka pegs in both directions in March amid ‘float’
Advertisement 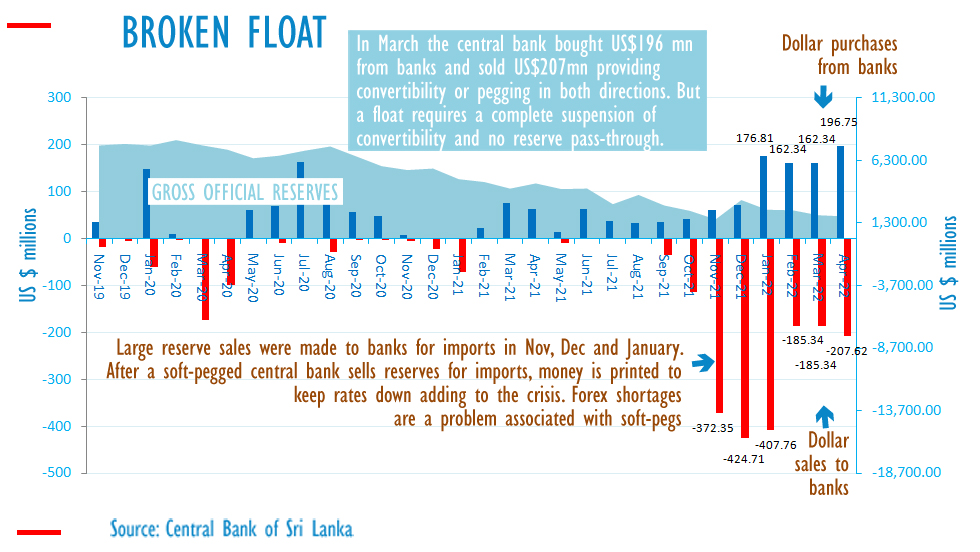 ECONOMYNEXT – Sri Lanka’s central bank has bought 196 million US dollars in March from commercial banks in March and sold 207 million dollars as in a pegged exchange rate, despite an attempt being made to shift to a floating regime, official data shows.

The credibility of a soft-peg breaks down when money is printed to keep rates down, as the new money boosts credit and rupees seeking to move out overtake inflows of dollars, creating forex shortages.

Central banks which run out of reserves can then shift to a float, to restore monetary stability and allow imports to be made freely by matching inflows outflows without interventions being made to change reserve money (ending reserve pass through of inflows and outflows).

Foreign exchange shortages and currency depreciation is a problem associated with soft-pegged exchange rates which are absent in hard peg (currency board) or a clean float. Developed countries which have floating exchange rates do not use reserves for imports.

However a soft-pegged central bank will also print money after a sale of dollars, to stop interest rates from going up (sterilize or neutralize the sale with new money), unlike a currency board or currency board like system where dollars sales are not offset with new injections (interventions are unsterilized), allowing interest rates to be market determined.

In November, December and January the central bank sold almost a billion US dollars for imports and sterilized the interventions with new money losing reserves and driving up credit and imports.

The central bank has pushed up policy rates to 14.50 percent from 7.50 percent, which will slow credit, boost savings and reduce outflows to restore monetary stability.

A float however is usually done to halt dollar sales by a central bank, which does away with the need to inject liquidity to sterilize the intervention and allow monetary stability to be restored at a lower corrective interest rate.

A float gives control of reserve money back to the central bank and allows it to enforce a policy rate without money leaking through interventions (no reserve pass-through) or having to inject large volumes of money to enforce the policy rate, creating conflicts between money and exchange rate policy.

Sri Lanka seen high levels of monetary instability since the end of a war due to money printed for output gap targeting (Keynesian stimulus), which breaks pegs and forces the central bank to seek International Monetary Fund support.

However the IMF also tell the central bank to raise rates and raise taxes to reduce domestic credit. In floating rates central bank independence and its discretion to print money is taken away by an inflation target set by law.

In a hard peg discretion is taken away with an exchange rate target and by outlawing money printing (banning the acquisition of domestic assets and committing the monetary authority to unsterilized interventions). (Colombo/May09/2022)