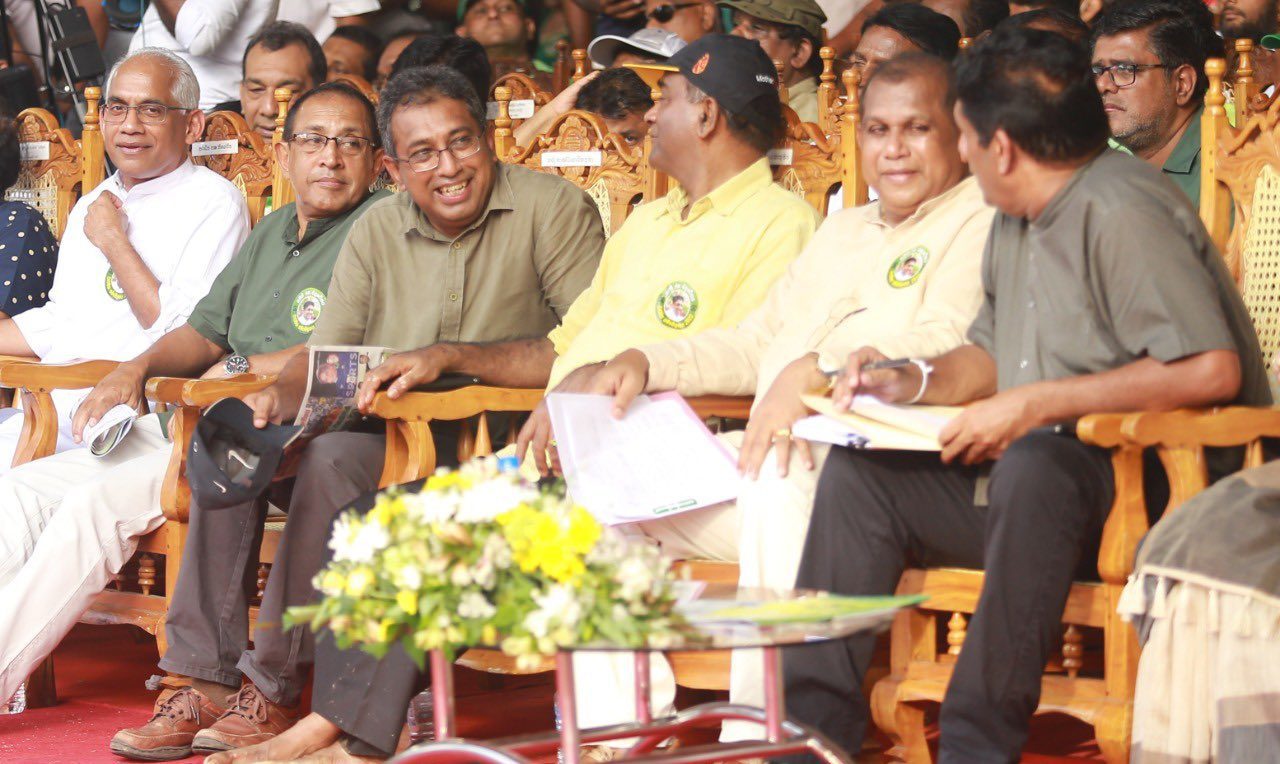 
ECONOMYNEXT — At its second annual party convention, Sri Lanka’s main opposition party the Samagi Jana Balawegaya (SJB) renewed its calls for any election while formally adopting a resolution to demand a local government election, with party leader Sajith Premadasa expressing confidence that his party is ready for a litmus test.

Speaking at the SJB’s annual convention on Sunday December 11, Premadasa said the party rejects extreme forms of both capitalism and socialism and follows a centrist path instead with a ‘Sri Lanka First’ vision to develop the country.

“We want an election. We’re ready to face an election. Those of you who work within the confines of air conditioned rooms and palace intrigue, try and destroy the SJB in an election. The SJB and our parliamentary group are ready to take on that challenge,” he said.

The SJB is home to the only team sans corruption or deceit that can bring Sri Lanka out of its ongoing currency crisis, he said, a claim contested by the SJB’s critics who say there are people with various allegations among its fold.

“Our vision is Sri Lanka First, to take the country to the top of the world.

“We reject the extremist capitalism that was standard practice in this country. We reject extreme socialism. We follow a middle path,” he said.

Critics of the party say the party has been unclear about its position regarding International Monetary Fund (IMF)-backed economic reforms proposed by President Ranil Wickremesinghe’s government. In one example, critics say, the party’s low rung leaders are calling for an immediate restructure of Sri Lanka’s loss-making state-run Ceylon Electricity Board, while the party leadership has adopted what the critics claim is a disruptive policy of unconstructive, politically motivated criticism.

SJB Treasurer and MP Harsha de Silva who also spoke at the event said that the party’s plan was to develop Sri Lanka into a knowledge and technology based highly competitive social market economy as a hub of the Indian Ocean.

“Our model will be a synthesis of economic and political freedom where markets thrive yet at the same time we build a strong safety net to ensure equity and social justice for all,” he said.

The MP, widely considered the SJB’s voice on economic policy, said economic reforms are absolutely essential and the party will see it to it that these reforms are made.

“We will breakdown protection walls and build bridges to join global production networks,” he said in a tweet recapping his remarks.

“Fact is since the demise of Pres Premadasa, no real focus on manufactured exports. While others progressed from apparels to electrical to electronics we didn’t. Our inward looking statist approach bankrupted us. Only way our youth will have a future is if we join the world! (sp),” he tweeted.

Critics of the SJB say, no matter how eloquently individual SJB members might articulate their position vis-à-vis reforms, SOE restructure, trade liberalisation and industrialisation, the party proper and its leadership have yet to officially announce its stance.

SJB National Organiser Tissa Attanayake, meanwhile, said the time has come to force a presidential election from the president.

“We have to talk to Mr Ranil Wickremesinghe and somehow get a presidential election, even forcefully. We have to push for a parliamentary election. Don’t forget 2023 is an election year,” he said.

“Leave this convention with the confidence that we can win any upcoming election,” he told the audience, some of whom were heard shouting slogans at the start of the event ‘our president’ and ‘our king’ when Premadasa arrived at the location.

Though the speakers’ demand was for any election, the party party opted to formally adopt a resolution at the convention to demand only a local government election in the coming year.

Speaking at the event, SJB General Secretary Ranjith Madduma Bandara claimed that the ruling Sri Lanka Podujana Peramuna (SLPP)’s vote base, which stood at 6.9 million in 2019, has now dropped to less than 10% of that number.

He was likely referring to the leftist National People’s Power, effectively a rebranded Janatha Vimukthi Peramuna (JVP), which obtained some 445,000 votes at the 2020 parliamentary election. The other party was ostensibly the United National Party (UNP), which the SJB broke off of en masse under Premadasa’s leadership in 2020. The UNP, led by Wickremesinghe and represented in parliament by a single MP, managed less than 250,000 votes at the 2020 polls.

Despite its thinly veiled potshot at the JVP, the SJB adopted a formal resolution at the convention to work together with “all progressive and democratic forces” to agitate against what the party called the government’s repression of mass protests and also to demand local government election.

Observers say that the JVP and the Frontline Socialist Party (FSP) and other leftists groups affiliated with the two parties have been instrumental in the success of the Aragalaya street protests that saw the ouster of ex President Gotabaya Rajapaksa. However, critics of the JVP are sceptical that its apparent rise in popularity since the 3% vote in 2020 is still unlikely to translate to a JVP-led government.

Meanwhile supporters of President Wickremesinghe argue that the commander in chief’s popularity is also on the rise, given what appears to be a return to stability after mass unrest earlier in the year, an easing of inflation and the availability of some formerly scarce commodities despite price hikes.

Political analysts say Wickremesinghe’s UNP is looking to form its own new alliance under the president’s leadership, incorporating section of the SLPP and some from the opposition camp, in an upcoming presidential or parliamentary election, whichever may come first.

The SJB convention saw large crowds gathered, but as is usual for party conventions and election rallies in Sri Lanka, they were likely card carrying party members and representatives of the party’s core base and not ordinary voters, and analysts question the SJB’s capacity to form a government at this stage even counting for the massive erosion of the SLPP’s popularity.

The convention saw the guest participation of a number of former SLPP stalwarts such as Dilan Perera, Chandima Weerakkody and others who now sit independently in parliament. Another notable SJB member from the Kaluta district who had been speculated to cross over to the government was also present.

Other resolutions adopted at the convention one to see that parliament pass an Anti-Corruption Bill drafted by SJB and to facilitate youth participation in Sri Lanka’s overall political process and to “recreate the Sri Lanka state” through social, economic and political reforms.

Popular singer Rookantha Goonathilake, who famously sang the UNP theme song ‘Ithin Hadamu Api Aluth Ratak’ but has since joined the SJB, performed for the crowd singing the SJB theme song, which was followed by a number of cultural items.

Some diplomats had also been invited.

Premadasa, in his speech, stressed on the importance of an election.

“In a democratic system, what is the best litmus test to evaluate one’s own strength? An election. We want an election. Don’t we?” he said, pointing at the crowd.