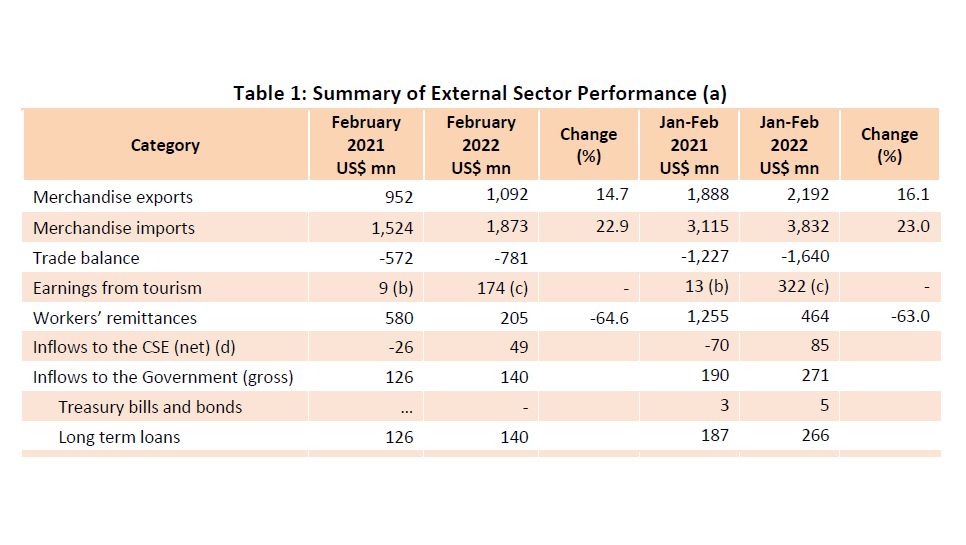 Industrial exports soared 19.4 percent to 882.7 million US dollars in February 2022 from a year earlier as the country experienced the worst currency crisis in the history of its intermediate regime central bank.

When a central bank prints money, partly via state workers salaries, total domestic demand for goods go up above that is usually generated from exports, receipts, tourism receipts and remittances.

In the absence of money printing, a fall in tourism receipts leads to a fall in imports as tourism sector workers lose incomes, reducing imports.

A rise in tourism receipts will similarly raise imports, but not hurt the exchange rate or cause forex shortages unlike central bank open market operations and direct finance of the deficit.

All ordinary people usually save money (private savings are over 20 percent of GD) and drive excess imports. The savings of people are made into imports by the budget deficit, losses in state enterprise financed by credit as well as private credit.

The central bank has already raised interest rates which will reduce private credit, however electricity prices have not been raised. Private and SOE credit was 79.4 billion rupees in February.

The stock market also saw an inflow of 49 million US dollars in February.

The US dollar number of export and import trade however is also bloated due to US money printing which has sent commodity prices up as the real value do the dollar decline.

It is customary for modern central bankers to point to other causes for inflation and monetary debasement other than monetary expansion, after the Keynesian revolution corrupted classical economics back into a version of Mercantilism. (Colombo/May13/2022)