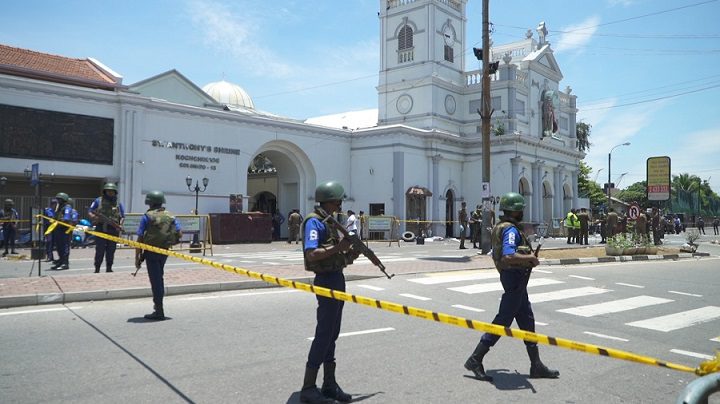 
ECONOMYNEXT — A suspect that was arrested in connection with Sri Lanka’s 2019 Easter Sunday bombings and was subsequently released was hacked to death in Colombo on Monday November 28, prompting Opposition Leader Sajith Premadasa to demand an explanation from the government.

Premadasa called for a statement from Leader of the House Susil Premajayantha on what he called an emerging lawlessness in the land.

The opposition leader also urged the government to look into death threats claimed to have been received by a social media activist by the name of Chirantha Amarasinghe.

“Amarasinghe has posted a video saying there are people trying to kill him. Then we learnt that a suspect in the Easter attacks has been killed.

“What is happening in the country? Isn’t this lawlessness? Suspicions raised around the murder of a suspect in the attack,” said Premadasa.

Responding to the opposition leader, Minister Premajayantha said it was difficult to comment on the incident at present as it was still being investigated.

“Throughout history, various incidents have occurred in our country. Since July, the status quo has been one of protest amid social, political and economic issues. We don’t know if these are organised [murders]. The police and the Criminal Investigation Department (CID) must investigate,” he said, explaining the criminal justice process that would usually apply to such incidents.

“We can ask that the incidents are probed, but we cannot give an opinion on it at the moment in parliament because it is under investigation,” he said, agreeing to look into it.

The Easter Sunday bombings that killed 269 people and injured over 500 was carried out purportedly by a small band of Islamist extremists that identified with Islamic State (IS) ideology. However, in the years that followed, the attack has been shrouded in mystery and controversy due to numerous as-yet-unproven allegations of a political hand being involved.

Many of the victims were Christians and Catholics who were killed in the blasts that occurred in churches, and the head of Sri Lanka’s Catholic church Malcolm Cardinal Ranjith has gone on record several times implying that there was a political motive to the attack. The cardinal has also repeatedly bemoaned what he claimed was the slow pace of investigations.