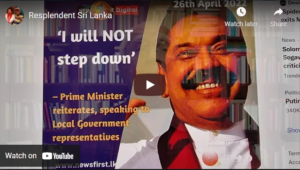 ‘We compile and present the current events for future generations can access someday.’ As Sri Lanka suffers its worst-ever economic crisis, waves of protests and mass uprisings involving all sectors of society, including students and teachers, have sent shock waves through the government and thrown the country into a deep political crisis.

The entire Sri Lankan cabinet resigned on Monday, 4 April. On Tuesday, around 43 Sri Lankan parliamentarians left the ruling government coalition to function as independent MPs, leaving the government without a majority in parliament. Previously, in the 225- member Sri Lanka parliament, the government and team had a 146 majority.

After the walkout, it was left with 104 members. Central Bank of Sri Lanka Governor Ajith Cabraal, also seen as responsible for the economic crisis, quit amid a deepening political crisis.

Academic activities have been interrupted at several universities as lecturers and students boycotted classes and joined people from political parties, civil society organisations, and other young people and their parents in island-wide protests where the chanted message was: “Go Home Gota” – a call for President Gotabaya Rajapaksa to step down and end what is regarded as the corrupt political system in the country.

Colombo 29th April NewsWire reported that the Central Bank of Sri Lanka )CBSL) has requested donations from Sri Lankans residing overseas and well-wishers of any nationality to address the current economic crisis in the country.

Issuing a notice, the CBSL said Sri Lankans are currently facing social, economic, and financial hardships due to the country’s depleted foreign reserves, resulting in significant difficulties in meeting the daily needs of essential medication, fuel, and food.

The bank assured that all foreign currency donations under this pledge would be utilised only to import essential items such as medicine, fuel, and food.

The CBSL added that the Governor of the CBSL has appointed a committee consisting of three senior bank officers to ensure the transparency of the receipts and utilisation of donations.

Further information through email to fdacc@cbsl.lk or sending a message to WhatsApp Number +94768315782

Mr Mahinda Rajapaksa is confident of bouncing back even if sacked. ‘Don’t be afraid; I will not resign.’

Colombo, April 28 (DailyMirror) – Prime Minister Mahinda Rajapaksa is presently facing one of the toughest challenges in his political career, with certain sections of the population calling on him to step down from the present crisis.

In an exclusive interview with Daily Mirror, Mahinda Rajapaksa has urged the people to be patient, stating it was not practical for him and the President to resign because they had been elected through a mandate. He further said there was no split between the two brothers, and they were resolving the issues to restore normalcy soon.

“We have a mandate, and if people want to change us, they can do it through an election.” Prime Minister Mahinda Rajapaksa reaffirmed that he would not resign from the post of Prime Minister.

He also spoke at a discussion with Ministers and members of Provincial Councils at the Temple Trees today (26).

The Provincial Councilors’ Forum unanimously passed a resolution at the discussion that the Prime Minister and the government do not require to step down.

Members of the Forum stressed that it is essential for Prime Minister Rajapaksa to continue in his post to resolve the current economic crisis in the country.

Thousands of demonstrators have hit the streets since April 9, clamouring for the removal of Sri Lankan President Gotabaya Rajapaksa, blaming him for the gross mismanagement of the economy.

Moiz Mustafa reports in Around South Asia, Sri Lanka reported that the city of Colombo is said to be wholly paralysed as many industries ranging from plantations, agriculture, power, fisheries, banking, health, sports, economic centres, teachers, and principals are among those that have joined the island-wide strike.

According to reports, approximately 1,000 trade unions have pledged support for the strike action.

Sydney Sri Lankan ex-pats gathered at Martin Place in Sydney to protest against corruption in Sri Lanka and demand the SL Government resign. This protest was organised to support our outstanding youth at the Galle Face.

Similar demonstrations have been held in many countries supporting the demonstrators in their mother country.
How far these demonstrations will impact the president Gothabaya and the prime minister Mahinda Rajapaksa to reign with shouts of “Gothabaya go Home’ will have, on the solidarity movements impact is yet to be seen.

According to a statement, a letter to all party leaders in the ruling coalition said the government was in agreement to form an all-party government comprising parties represented in Parliament.

The meeting was fixed yesterday to discuss the new arrangement after Prime Minister Mahinda Rajapaksa’s resignation.

This comes in the background of pressure mounted within the ruling coalition on the prime minister to resign to make way for an interim government.

More Sri Lankans will slip into poverty this year, the World Bank has warned.

It urged the debt-ridden island nation to undertake urgent policy measures to address the high levels of debt, trim the fiscal deficit, and mitigate the adverse impacts on the poor and vulnerable.

Sri Lanka is currently in the throes of unprecedented economic turmoil since its independence from Britain in 1948.

The crisis is caused in part by a lack of foreign currency, which has meant that the country cannot afford to pay for imports of staple foods and fuel, leading to acute shortages and very high prices.

“Around 11.7 per cent of people in Sri Lanka earn less than $3.20 per day, the international poverty line for lower-middle-income countries, up from 9.2 per cent in 2019,” the Bank said in its Spring Update on the South Asian region.

The other reason for the increase in poverty rates in the country was that the government’s Samurdhi programme, which covers around 1.2 million low-income families, remained inadequate.

Further, due to the pandemic, the Sri Lankan economy has contracted by 3.6 per cent in 2020.

The World Bank’s April 2022 update of Macro Poverty Outlook for Sri Lanka asserted that the heightened fiscal and external risks and the challenging political situation pose significant uncertainty to the economic outlook.

The country faces an external financing gap in 2022 and beyond.

The necessary adjustments may adversely affect growth and impact poverty initially. Still, it will correct the significant imbalances, subsequently providing the foundation for more robust and sustainable growth and access to international financial markets.

Last week, the World Bank readied a $10 million package to Sri Lanka to purchase medicines and other essentials.

Sri Lanka needs at least $4 billion to tide over its mounting economic woes, and talks with international institutions such as the World Bank and countries like China and Japan for financial assistance have been going on.

Last week, the Sri Lankan government said it would temporarily default on $35.5 billion in foreign debt as the pandemic and the war in Ukraine made it impossible to make payments to overseas creditors.

As things go, forming an all-party government with solidarity may be the immediate solution to solve the political crisis in Sri Lanka. Only such a party can impeach president Gothabaya, and whether that would materialise is yet to be seen.

Sri Lanka’s financial situation has deteriorated into a medical problem, with the top medical union declaring a national health emergency over a life-threatening shortage of drugs.

On Tuesday, the country’s most powerful trade union, the Government Medical Officers’ Association (GMOA), called a meeting and declared a medical crisis as doctors and hospitals reported a widespread lack of medicine.

Sri Lanka’s lack of foreign currency reserves has had a devastating impact on medicine availability. More than 85% of pharmaceutical products in the country are imported and paid for in US dollars. If dollars are not available, then drugs cannot be bought.

The Sri Lanka Chamber of Pharmaceutical Industry warned last month that 5% of prescriptions were out of stock, and the problem was likely to worsen.

It was a great success, and over 20 thousand dollars were collected to send to needy institutions in Sri Lanka.

Without wasting time and energy on demonstrations, we appreciate the gesture shown by these Master Chefs. We congratulate them.

We will present the new developments in the present crisis as it happens.

Stay safe, and goodbye for now.

The information contained in this article is for general information purposes only, and whilst the author will endeavour to keep the information up to date and correct, eLanka makes no representations or warranties of any kind, express or implied, about the completeness, accuracy, reliability, suitability or availability with respect to the eLanka website or the information, products, services, or related graphics contained in this article for any purpose. Any reliance you place on such information is therefore strictly at your own risk. In otherwords, eLanka In no event will we be liable for any loss or damage including without limitation, indirect or consequential loss or damage, or any loss or damage whatsoever arising from loss of data or profits arising out of, or in connection with, the use of this website / article. Also please note that through this website / web page articles you are able to link to other websites which are not under the control of eLanka and therefore we have no control over the nature, content and availability of those sites. The inclusion of any links does not necessarily imply a recommendation or endorse the views expressed within them.

SUNDAY CHOICE – The Foolishness and Power of the Cross