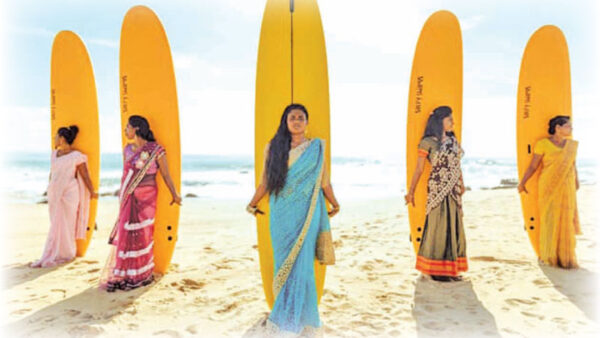 Growing up in a small fishing village along the East Coast of Sri Lanka, Shamali Sanjaya would often sit on the beach and look out at the boisterous waves. She would watch in envy as others, including her father and brother, grabbed surfboards, paddled out into the sea and then rode those waves smoothly back to shore. “I longed for it in my heart,” she said.

But as a local woman, surfing was strictly out of bounds for her. In Sri Lanka’s conservative society, the place for women was at the home and it was only the men, or women tourists, who were allowed to ride the hallowed waves in Arugam Bay, considered Sri Lanka’s best surf spot and one of the best in Asia.

Yet now, as a 34-year-old mother of two and with another baby on the way, Sanjaya is at the forefront of a quiet women surfing revolution that has swept not just her village but the whole country. In 2018, she helped set up Sri Lanka’s first all-women surf club in Arugam Bay and in 2020, competed in Sri Lanka’s first women-only category in a national surfing competition. At four months pregnant, she is still hitting the waves several times a week, and plans to compete again after her baby is born.

It began in 2011 with a knock from a neighbour. Tiffany Carothers, a surfing enthusiast and mother of two who had just moved in next door from her native California, USA, asked Sanjaya if she wanted to come surfing. It did not matter that she had only tried it once before, Carothers assured her, they would lend her a board and give her some lessons.

Once she had a taste for the waves, Sanjaya could not be stopped. She proved to be a natural, taking after her father, who had once taught surfing, and her brother, who is a national surf champion in Sri Lanka.

“When I surf, it is such a happy feeling for me,” she said. “I am filled with this energy, I feel so strong. Life is full of all these headaches and problems, but as soon as I get into the water, I forget about it all.”

Yet she faced fierce disapproval, particularly from her brother. Their parents had died when she was seven and he was protective of his sisters, believing that their place was inside the home.

“My brother told me that it is not our culture for women to be surfing, that I should stay inside and do the cooking and cleaning,” said Sanjaya. Known for being headstrong, she decided to ignore him and would instead co-ordinate secret surf rendezvous, rushing to the beach at lunchtime when her brother was eating or going out at the crack of dawn.

In 2015, after interest from other women in the village, Carothers decided to set up an event to teach more local girls in Arugam Bay how to surf. She and Sanjaya went house to house, talking to women and their families to persuade them to come along.

Initially many parents were reluctant, fearful about safety and that surfing meant partying, drugs and alcohol, or that, in a society that still subscribes to outdated views of light skin equating to beauty, being out in the sun would darken their daughters’ skin. “We told them we never do anything that disrespects our culture,” said Sanjaya. “We do not wear bikinis, we do not drink, it is just about getting into the waves.”

The first event proved so popular that they decided to make it a weekly gathering. But as gossip and local disapproval began to swirl, Carothers was pulled in by the Sri Lanka Tourist Board. “They accused me of trying to change the culture, that girls in Sri Lanka do not surf and if I wanted to help their families I should give them sewing machines,” she said. “They threatened to kick my family out of the country if they saw me teaching surf lessons to girls.”

The Police also began questioning the members, asking whether Carothers was giving them alcohol and drugs, and over half the girls stopped attending. But rather than stopping altogether, the remaining women took their club underground and would meet secretly on the beach and go on clandestine surf trips to other parts of the island.

Finally in 2017, after the Surfing Federation of Sri Lanka was set up, there was a pathway for their own official surf club and in August 2018, the Arugam Bay Girls Surf Club was born.

They now have about a dozen core members, ranging from ages 13 to 43. Though they have broken through many of the local taboos, many of the women still face a backlash from their families and communities. Nandini Kaneshlingam, a 43-year-old mother of four whose husband killed himself in 2011, said she suffered so much stigma over being a mother and widow in her 40s on a surfboard that she almost quit the club several times.

But having persisted at the insistence of the other women, Kaneshlingam said that surfing had given her a new lease of life. “It was my children who came and pushed me on to waves,” she said. “After my husband died I was very sad and things were very difficult, but with surfing, it made me feel happy again.”

Ammu Anadarasa, 14, one of the club’s youngest members, said she had been mercilessly teased at school. “My friends at school used to fight with me about it, they would say ‘Why are you doing surfing?’ and call me a boy,” she said. But when she showed her friends photos in a local newspaper of her surfing, they were impressed. “Now they know I am a good surfer,” she said. “I just wish more girls would do surfing.”

Most of the women said they had learned to brush off the criticism, and had seen their husbands, family members and communities won over. Mona Nadya Pulanthiram, 35, a mother of two, had been terrified of the sea after her mother died in the 2004 tsunami that devastated coastal areas in Sri Lanka. But after giving birth to her second child, friends persuaded her to give surfing a try, and she was amazed to feel her fear gradually disappear. Now she is regularly out chasing the big waves, sometimes with her daughter in tow.

“People are always questioning my husband, asking why I do not just stay at home and be a quiet, nice mum,” she said. “To those people I say: I am already a mum, surfing does not change that. When I am in the ocean, I do not think about anything except catching the perfect wave.”

For Sanjaya, her greatest triumph was finally winning her brother’s approval. At Main Point, where waves are often two metres high, the pair can often be spotted out surfing together.