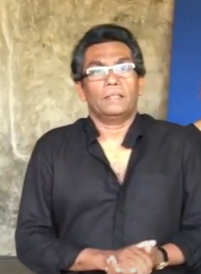 The Ravibandu Vidyapathy  is  multipotentiality acclaimed Sri Lankan drummer, dancer, choreographer, instructor, theatre costume and prop designer ,an accomplished percussionist who had introduced experimental percussion symphony to the western world. Ravibandu along with his wife Samanthi has brought laurels to motherland in performing with the pupils of the duo’s dance school Ravibandu-Samanthi Narthanayathanaya at several foreign venues to dumbfound numerous passionate audiences

. Ravibandu who has had hereditary affiliations with innate aptitude skills in dancing is the elder son of iconic multifaceted artistic duo  Kalasuri Somabandu Vidyapathi a resident of Pannipitiya and Malathi Algama Ravibandu a Kandyan ,both hailing from dancing and painting upbringings. The mother is the daughter of Algama Kiriganitha Gurunnanse a well renowned upcountry dancer and teacher who had groomed among many , Chandralekha a prominent dancer. .Father too had been proved to have been allied to a lineage  of seven generations of traditional dancers.But when he was sent to Chitrasena Guru at the Chitrasena Vijira dance academy he had made him instead the pioneering artiste in costume designing and stage decorations while mother had continued to be  teacher in dancing and ballet trained under the tutelage of illustrious Chitrasena  .In this scenario Ravibandu had inherited dancing skills laterally with supplementary innate aptitudes. Father Somabandu and mother Malathi Algama have been the pioneer students in the along with Pandith WD Amaradewa in the Heywood institute of art and aesthetic studies in the University of Ceylon in year 1952.It had been affirmed that the trio had represented the first batch of dancing students at the Heywood institution. It is also been added that the  trio had been acquainted with the Chitrasena Vajira dance academy from the decade of 1940’s. Though both parents were competent in dancing with a distinct antiquity though the mother been a dancing guru when Ravibandu was barely thirteen years he had been sent to Chitrasena school of dancing to learn the art which the parent’s had thought was more prudent, where Channa Wijewardena had also been a parallel student.

Drawing inspiration from his father Ravibandu had added new dimensions to Sri Lankan dancing and drumming after learning traditional dance forms in Sri Lanka.To enhance his repertoire further he was sent to Kerala Kala Mandalam where he learnt in a rigorous formal three year training in the ‘Kathak’ dance format. During his tenure in India he had also been trained in performing the Tabla from  David Appuhamy while on his return he had learnt local drumming from Piyasara  Shilpadhipathi while attached the Chitrasena academy. Upon returning he appropriately established his dance school with his wife Samanthi who is also a competent dancer and a knowledge filled teacher at Pita Kotte. Ravibandu had quipped that he listens to all types of music Sinhala, Hindi, Tamil, Jazz, Rock,Rege,Rap,Western,Getabera,Classical or whatever when time permits , whereby he gets instigated to create a new themes for creative pursuits for  dances  which ultimately  becomes his originals. In this maneuver he had vehemently successful to combine the  music of the Sri Lankan Getabera with western music also Jazz music with Indian classical music.Ravibandu over a period of thirty years he had participated in the Chitrasena operas of “karadiya” ,”Nala damayanthi” and “Kinkini Kolama”.He had also positively participated in Vajira’s operatic conceptions like “Chandalika” and “Rashoman”.It is reliably learnt that he and Channa Wijewardena had interchanged the individual roles while Ravibandu had even  triumphed in portraying roles of Guru Chitrasena to be recognized as   the charismatic individual he is.

Within this period Ravibandu created his own operas, the first been “Thunwenna” which was staged in year 1984.Thereafter he created other Opera’s based on renowned world classics, to name just a few “Romeo and Juliet”,”Theweni  Vyasanaya”,”Thrishna” and “ Yudden Mihidanwu Daruwo”.Having been prompted to Opera and dancing through the able guidance of stalwarts Chitrasena and Vajira he became known as a protruding Ves dancer from year 1981.  To deviate from the norm Ravibandu with the assistance of Samanthi created the innovative “Short Ballet” having choreographed several critically acclaimed “dance pieces’ which intertwine traditional and the contemporary- such as for the young killed in War and Judas.As a percussionist has explored and experimented with various facets widely creating new magnitudes for traditional drums and drum rhythms.Ravibandu Vidyapathi drum Ensemble had toured across many western countries performing in music festivals  to great acclaim and ovation mesmerizing foreign audiences.Ravibandu himself had shared the stage with world renowned drummers as Billy Cobham and Zakir Hussien.Ravibandu drum Ensemble is viewed .

As a drummer, he has explored and experimented with the various aspects of drumming and drum composition widely, and has created new dimensions for traditional drums and drum rhythms. The Ravibandu Vidyapathi Drum Ensemble has toured across the world, appearing at festivals such as WOMAD in Australia in the Kauffman concert Hall, Kennedy Centre in 2008, in Singapore ,UK Japan to great acclaim. Ravibandu himself has shared the stage with world-famous drummers such as Tilak Gurta, Billy Cobham and Zakir Hussein. Today, the Ravibandu Vidyapathi Drum Ensemble is widely viewed as Sri Lanka’s finest drum Ensemble.

In year 2019 when Ravibandu reached his sixtieth birthday emulating his guru Chitrasena celebrating phases of his life , the multipotentiality personality as a dancer,performer,choreographer,leader of the famed Ravibandu drums ensemble appropriately desired to bring back his accomplishments with a series of artistic endeavors recollecting the fact in fulfilling his father’s dream to share his knowledge in aesthetics generously.  There were a number of events and performances between the last two weeks in December FREE to all .The events were “ Right of Spring”, (The story of ‘Rite of Spring’ is based on a ritualistic act in 19th century Russian tribal society where every year a virgin is sacrificed for the prosperity of the society. He had been interested in using the original version of ‘Rite of Spring’ to create a similar type of work in Sri Lanka. However, had adopted the storyline according to our own traditions giving a Sri Lankan flavour with a different interpretation) “white Nights”, “White Crow”and “Kohoma Kankaroyo”.This was a gesture of deep gratitude allowing his fans to witness free of charge.

Today Ravibandu continues his father’s legacy filling the void left by him in the massive sphere of traditional art.   Ravibandu had confessed that his ultimate intent is to develop an optimistic defiance towards dance in the future peers. However, it is a true concept that if any art is not contemporary it’s hard to entice audiences. Had affirmed that adopting a story from the 19th century into the 21st century is cumbersome not at all easy. According to Ravibandu it isn’t intolerable either. Elaborating the process of converting such a ballet into a contemporary subject he had quipped after his first inspiration came from a painting he saw in a gallery in Belarus.

The painting depicted an era before the revolution, when poor farmers in Russia married off their daughters to wealthy old men for money. The dreadful life of those farmers and their victimized daughters have been carved in this painting.

Isn’t this contemporary he had asked himself? The same social issue is still prevalent in our society. This situation is most acute among the Tamil society in South India and with the European peers. This is a common situation anywhere in the world. Therefore, he had used the similar conflict in ballet to discuss the socio-political discourse of the present moment through the conflict between tradition and modernity. Theatrical costumes and set design exhibition the second feature of the series of artistic endeavors was an exhibition of Ravibandu’s creations and choreography, theatre costumes and stage designs, where Ravibandu’s and his father’s original set designs and theatrical costumes were exhibited. Somabandu Vidyapathi possessed handwritten reasons behind the creations of theatrical costumes and stage settings also were displayed to enhance the knowledge of the spectators.

Bringing them all together in one exhibition, the opportunity was given to spectators to explore the gradual evolution of theatrical costumes and stage set designing from father Somabandu to son  Ravibandu.

Ravibandu affirms although Dance film is a common and well received genre, especially, in Europe, here in Sri Lanka this genre has rarely been discussed.

Dharmasiri Bandaranayake’s ‘Bawa Duka’ and Dharmasena Pathiraja’s ‘Sakkaran’ could only be categorized under the dance film genre. He organized these two film screenings, by which Ravibandu hopes to open a new dimension of film discussion in the country.

According to Ravibandu dance film has not been taken into serious consideration by filmmakers in the country. Besides, this genre is not even discussed. However, it is widely discussed and is quite big in the world outside. Therefore, through these screenings his intention was to bring this unspoken genre to the forefront. Ravibandu had spent almost five decades of his life as a traditional dancer, choreographer, drummer, and teacher. He believes that it is his prime utmost duty to present our heritage of traditional arts with modernity to the future generation of the country. That is the sole reason in hosting this series of arts festival hoping  this would be entertaining cum an educational session as well for the intense audiences.

Ravibandu and Samanthi duo is blessed with a son and a daughter.Son Jitendra 33 years of age already following the footsteps of the parents are fully involved in the activities of the Narthanayathanaya with hereditary affiliations also a dancer himself. Daughter 27 years old too has inherited talents with hereditary affiliations to be an expert in the same field presently undergoing intense courses in dancing at a university in Lucknow India .The duo have taken a keen in interest in the dance academy where dancing is thought for students in the ordinary and advanced levels also for children above four years old. Owing to the aptitude in art and culture Ravibandu had served as an advisor to the Cultural Minister in five separate governments but owing to his involvements in his own dance academy he no longer serves on that prestigious post.

Ravibandu Vidyapathy owes his success predominantly to Chitrasena Kala Ayathanaya’ the  Guru where he was thought the art of dancing ,discipline in the theatre, art of choreography, art of ballet etc., also had the supreme opportunity in meeting fiancé’ Samanthi.From the above there is no doubt no other artiste had contributed so abundantly to the field of art as a percussionist , classical and folk dancer revolutionizing ballet hailed by the western world bringing laurels to motherland.