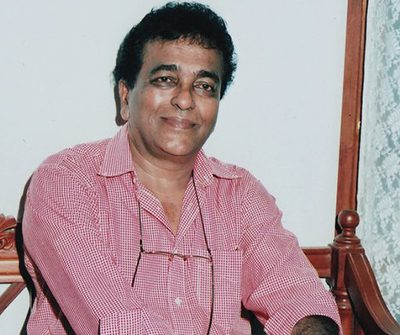 Nissanka Diddeniya known to many as Diga at heart, himself a die-hard  country folk born in a very rural village Panawenna in Kahawatta in an ecological environment. Nissanka had grew up in a small farming community his father himself a humble paddy farmer.Both father and mother were both gifted vocalists. Nissanka’s family consisted of three brothers apart from  four sisters .Two elder brothers were ‘teeter’ artistes, elder had portrayed female fictitious characters while the other had performed anti-hero roles in the village ‘teeter” dramas which Nissanka had followed suite.

No doubt Nissanka had inherited innate artistic aptitudes from his littler days. The atmosphere within the village with the Adams peak and Sinharaja forest  on either side overlooking ,with streams, with flora in abundance was indeed a terrific impetus for any person to commence a career in art. In addition Nissanka has had close links with the temple having tracked the “Peraheras’ with eagerness where he had got a passion, appreciating the numerous arrangements of dances in up country, low country and Sabaragamuwa flairs also connecting with the peers in numerous agriculture fields in the village like those actively tangled in tea, rubber and coconut who conducted their own inimitable type of conceptions to add fascination to the “Perahera” event. This was another omen foretelling Nissanka’s potential dominance in art and culture in the future.

Nissanka Diddeniya was born on the 27th January 1945 as the seventh child of eight siblings four males and four females, has had his initial education at “Panawenna Dharmarama” Vidyalaya thereafter at Pelmaduula Gankanda Madhya Maha Vidyalaya and entered the University of Peradeniya in year 1967 from Sri Sudharmodaya Madya Maha Vidyalaya having obtained best results . During his tenure at all these schools Nissanka had excelled in vocals had been deemed as the best singer in the school has had to sing on request at all School events as he had eclipsed all other students. He had been labelled as “Iskole Sindu Karaya”. He had also been an ingenious dancer having trained under competent educators. The tutors in schools had affirmed to Nissanka that he is already skilled in these fields, For him to pursue further he should enter the University of Peradeniya. One such teacher was a beautiful actress who had portrayed the lead role in Professor Ediriweera Sarathchandra’s introductory original stage play ”Bahina Kalawa’ in year 1952.The other was the literature teacher Karunaratne Bandara Ratnayake who had also advised him to enter the University of Peradeniya to blossom his aptitude further. During the tenure at school Nissanka had participated in most stage plays specifically Nurthi and Nadagam inventions to which his accomplished contributions had been mammoth. In the Nurthi and Nadagam stage plays there is no one else to date to supersede Nissanka as his robust figure and the rhythmic deep voice makes all audiences spell bound. Even at present there is no appropriate substitute for Diga. In terms of all , all-time stage plays produced in Sri Lanka he is only second to legendary late Jayalath  Manoratne.

Nissanka  had partaken in many aesthetic related courses like music, oriental, eastern, nurthi,nadagam and many types of dancing up country, low country. which had facilitated him in his fruitful journey in aesthetic pursuits.  He had passed many examinations related to these extra-curricular recreations before entering the University, what a triumph at such a delicate age. Nissanka has been graded as a super grade artiste as an exponent in ‘Nadagam Gee’ , a Super Grade artiste in ‘Nurthi Gee ‘ while qualified as an ‘A grade’ artiste in  ‘Jana and Sarala Gee’ categories.

In year 1960 Nissanka was selected by dramatist Raja Sumanapala for his maiden stage play ‘Bathe Upatha” while still a student .This was soon ensued by in the succeeding years, uninterruptedly offering him roles by producers of stage plays such as in “Pin Bath”,”Sudo Sudu”, ”Nari Ugulak”,”Thakka Jathakay”.Nissanka participating in the inter school all-island drama competition where he   was adjudicated as the ‘best actor “in year 1964 which was a premonition for his drama fame in store. At such a young age his name was etched as a household name among those who were die hard stage drama enthusiasts. While he was an undergraduate at the University of Peradeniya, he offset his academic studies with his hectic schedule in the drama arena completely sans any impediment to his studies.

Between the years 1970 to 1996 for an uninterrupted twenty six years Nissanka had portrayed in the second edition of  “Sinhabahu” role singing the famous song “gallena bindala len dora erala” which remains etched in reminiscences of all stage play fans. There are many other pupular stage songs sung by Nissanka during his long tenure  as a stage artiste. This uninterrupted sequence of twenty years acting in a single stage play role is a record not effortless to surpass. In year 1969 Nissanka was chosen to act in Professor Ediriweera Sarathchandra’s ”Prematho Jayathi Soko”.

In the year 1963 was adjudged as the best singer in a singing contest in the Sabaragamuwa Province in stage plays during this era.One of Nissanka Diddeniya’s prime motives to enter the University of Peradeniya was to be an understudy to Professor Ediriweera Sarathchandra which was justified even before, when in year 1969 in entering the big stage in “Prematho Jayathi Soko” after which the talented Nissanka was conferred with a flurry of stage Dramas in the ensuing years  with roles in “Maharasa”.,’Sinhabahu”,”Swarnamali Natakaya” ”Gajaman Nona”., “Makara”. “Mahodara Yakshaya”, “Saliya Tharuanaya”. “Dilliye welanda”. “Kada Wlalu”,“Violin Wadakaya”. , “Ramayanaya”, “Sathuru Mithuru”,”Nari Bena”, “Maha Hene Kathawa”,” Maname,” “ Siri SangaBo”. “Wessanthara”, “Maya Devi” ,”Tharawo Igilethi”, “Chitrage Prema Kathawa”, “Yathra”, “Socratees.” ,”Madura Jawanika” “Nelum Pokuna”,”Maha Samayata” more recently in year 2018 “Maha Supine”.These  are only some stage dramas Nissanka had portrayed roles that comes to mind .It is on record that Nissanka had portrayed roles in over forty popular stage plays.These dramas were directed by the cream such as professor Ediriweera Sarathchandra, Dayananda Gunawardena, Henry Jayasena, Prasanna Vithange, Lucien Bulathsinhala, Sunanda Mahendra,Ariyaratne Athuge etc. The above list when read it is hard to believe that Nissanka Diddeniya had acted in so many popular dramas as such he should be hailed as an undisputed legendary stage actor who had conquered the stage to unprecedented tall heights which could be never equalled easily by another for perhaps centuries.

.After, the demise of Professor Ediriweera Sarathchandra, Nissanka was an obvious option for stage portrayals for Dayananda Gunawardena’s dramas. While still young Nissanka had acted in Dayananda Gunawardena’s “Bak Maha Akunu” in 1962 a translation of the French play “Marriage of Figaro.” In most Nissanka’s portrayals it had been recurrently the mix of dance and singing on both repertoires on both fields he was very effective. Nissanka portrayed the key role in Dayananda Gunawardena’s new creation a modernized version of Charles Dias’ ,“Padmavati”, a ‘Nurthi’ creation, followed by “Gajaman Puwatha” in year 1974..In Dayananda’s “Madura Jawanika” a dramatized narration with joyous scenes where Nissanka portrayed three characters quite a cumbersome endeavor. Nissanka had acted subsequently in many stage dramas directed by many some of which are translation dramas. .It needs to be emphasized that it was during this era that Nissanka was studying for a post graduate diploma in writer ship and communications at the Sri Jayewardenapura University which he had navigated over sans much of a hassle. Nissanka has been capped a Sangeeth Visharada in 1989 after a course endured from 1985.In year 1960 had qualified in up –country dance, in 1962 in Eastern music and dancing. With all these qualifications had been a member at the Sri Lanka Arts Forum between years 2000 to 2004 ,while was elected to the Director board of the Arts Forum in year 2004.Nissnaka had served as visiting lecturer at the Kelaniya University and in the Visual  and Performing Arts University

Nissanka possessing enormous practical and theory knowledge had formerly thought drama and ‘Nadagam ‘ music  to youth as head of the drama school at the National Youth Service Council where interested folks underwent eight month training course during which time Nissanka was attached to the Ministry of internal and external trade, when he was seconded for service at the NYSC..

Nissanka was so immersed in acting ranges had quipped he had no time to write or direct dramas unlike his counterpart Jayalath Manoratne, both however had inaugurated acting while still in school having immense innate abilities. Nissanka is not seen much on the small screen sans for portraying “Patteyame Lekam” in Gajaman Nona screened two decades ago.On the insistence of veteran director Bandula Jayawardena Nissanka had co–directed the teledrama “Swarnamali” in year 2014 consisting over one hundred episodes. This joint exertion evidenced to be meticulous and laudable.

Nissanka had journeyed vastly overseas for arts and drama pursuits like Hong Kong,China,Thailand,Paris,Germany,Italy,Canada,Dubai , Singapore,Australia.Maldives,Pakistan  and USA

In the year 2018 on 9th June precisely, the variety entertainment staged at Nelum Pokuna performing arts theatre named “Makaranda” was the brain child  of Nissanka, a very infrequent music extravaganza, where five competent singers in drama ,Nurthi,Kolam sang with appropriate illustrations which was a resounding success ,only such recital ever got off the blocks so emphatically. The music was directed by musician Nawaratne Gamage with ample guidance from music directors in stage dramas.The vocalists selected were from the cream in Saman Lenin.Indika Upamali, Nissanka Diddeniya,Rodney Warnakula and Nilakshi Helapitya.There were all types of songs sung like Nurthi,Hipoc,Rap, stage songs and oriental songs.

Nissanka Diddeniya is married to Vinitha Nandanie Hettiarachchi.The duo are blessed with a son Manuja Medankara and daughter Pabasara Medhavini,Son is married to a consultant physician Lushanthi kannangara attached to the Colombo South teaching hospital as a consultant Geriatric treating elders.Daughter is married to Nishan Liyanapathirana the CEO at Nawaloka group of Companies. The duo blessed are with  a son and a daughter as with Manuja and Lushanthi.

During the  State Drama Festival in Year 2020 Nissanka Diddeniya was honored with the one time prestigious award  “NATYA KEERTHI” for his immense contribution to stage drama for over four decades.

In the context of the above the contribution made by Nissanka Diddeniya is colossal to art and culture in Sri Lanka particularly with his robust figure and the rare stage voice which is difficult to surpass. All Sri Lankans who love the stage would undoubtedly wish him good health and longevity.

Thomian, Trinitian to light up

Gene Watson – Enough For You – Kelly Klassic – by Des Kelly