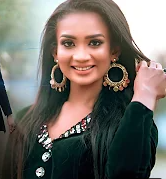 Nadini Premadasa has been in the limelight of our music arena for nearly two decades possessing an ideal singing voice, self-confidence, passion ,innate talent,commitment,patience,determination having the ability to accept criticism and rejection.Nadini like other singers tend to be a predominantly artistic individual, meaning that they are creative and original who work well in a setting as a cohesive partner that allows for self-expression. She is  innovative, which means that she is usually quite a natural performer who flourish at influencing persuading others.It is purely her innate skill she possesses for the singing aptitude sans any hereditary affiliations.

Nadini Premadasa was born to parents’ duo Kalinga and Manel Premadasa. As many vocalists Nadini too had displayed her talent in music starting from school days at Musaeus College.

Nadini has had a rousing appetite for music from her childhood. She had commenced as her first step by performing in school from the  primary. This is where she realised to sense and to understand music, even at a very tender age having inborn talent. She had participated in many singing competitions while in school ending as the ultimate winner in most. She had been adjudicated to the second place in All Island ‘Nadagam Gayanaya’ competition in year 2000 which had given her impetus to pursue a career in music.

As a result of the credibility and identification of her immense talent, Nadini was chosen as the leader of the senior brass band at Museaus College. This undoubtedly gave her the boost and inspiration to her musical career to lead the college ‘brass band’ being the inventor to organize the band fiesta “Dolce Ed Vivace”. Apart from that Nadini who was good in academic work was awarded the position senior prefect of the college. This position instigated Nadini to fine tune her leadership skills simultaneously grind her abundant talent in music.

The year 2007 was the progressive year of Nadini Premadasa’s music path. She let loose her potential in artistic arena by entering to the gruelling “Sirasa Super Star Singing Competition”. This was then the pioneer  competitive reality singing program in Sri Lanka. She had the courage and talent to compete with the best vocal celebrities in the country. As a result, she ended as an impressive ,promising and talented female singer.This was a huge opportunity for her to be known among the music fans in the country.Her performances made the organizers of concerts both indoor and outdoor with invitations as she was impressive as a performer. To date Nadini is a sought-after artiste for musical concerts as a matured singer singing other than her songs even ‘baila” songs which make audiences mesmerized.

Starting with her first audio release ‘Sapu Kusume’ to the lyrics of popular lyricist Kelum Srimal ,and music composition of Roshan Fernando, ,which song is still popular after one and a half decades.In year 2007 followed by her first music video production of the song “Madesa Balannai” a duet with Iraj Weeraratne in the same year’.To date Nadini had recorded many songs in videos both audio and video many of which have been blockbuster such as “Gajaman Nona” lyrics by Wasantha Dukgannarala,music of Iraj Weeraratne, “Dilisena Denetha Obe” lyrics by Sajith V Chathuranga music of Radeesh Vandabova,” Oba Dinnane Ne” lyrics and music by Chathuranga Warnasekera.”Sitha Umathuwela” lyrics by Sampath Fernandopulle ,music by Priyantha Nawalage. Among other video are “Guru Pare”, lyrics by Kelum Srimal  and music by Ruckshan Mark” “Akasa Jale”, “Thava Dura Noyanna”,”Obata Yeheliya”,”Madesa Balannai” etc.Nadini did an audio video “ Me Ape Deshaya” which was a duet sung in all three languages. a patriotic song.She has many more songs in videos which could be seen and heard from the you tube

Nadini who had been dominating in the music arena is constantly called upon to all television channels for chat programs where her songs over the years are reminisced. Her passage in the recording of new songs is made in somewhat of a restrained manner not rushing to sing new songs, her journey is leisurely. In the contest of the above she should be satisfied on her journey which began from her school Musaeus as the songs she sang in year 2007 are still popular which music fans love to hear. All fans would wish her success believing the best of her as a mature vocalist is yet to come

Some of Nadini’s audio songs had been made into HD videos using modern technology which have been very impressive to view.. Most of her HD videos had been produced by M Entertainments, Elakiri.com,Music.lk etc.It need to be emphasized music that all her videos have been impressively accomplished at appropriate locations. Nadini is often summoned to perform in all television channels like chat programs where she has to sing which she does to impress all audiences locally and overseas making them enthralled.

It needs to be added that Nadini is now a matured vocalist with diverse singing styles featuring on stage with pop, hip hop,rock,classical, baila etc,all of which she sings to fascinate audiences instead of limiting to one single style.She had enhanced her music knowledge after she completed a bachelors degree in music at the Visual and Performing Arts university.

In the context of the above Nadini in on slow path with no hurry or ambitious to sing new creations. She takes time to select good lyrics and music melodies to go with them.All fans would wish her the best as she has more music stored in her for future triumphs.

Commemorative coin to mark 150th anniversary of Faculty of Medicine, University of Colombo