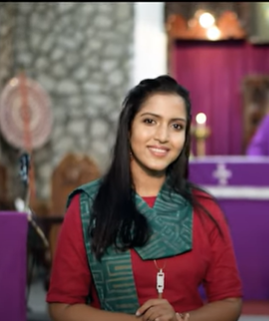 Dinithi Upeksha Ranaweera had commenced singing at her school Southlands College Galle having had innate talent not linked to any hereditary affiliations. Dinithi had shown promise as a student having emerged as the third best all Island student before she entered medical College.It is reported that Dinithi in addition to singing had participated in many extracurricular activities.At medical College she was well known as a soloist which made her to be selected to sing in many musical concerts.

A great singer obviously should possess innate skill backed up with a good voice.Of course should be conversant with notes, rhythms, phrasing and styles which are the basic skills needed.A singer should possess immense passion for singing. An associate professor of music in USA recommends digging into the expression of the words and the singer’s ability to colour them appropriately.

Dinithi while studying for her MBBS degree had been invited for many concerts including at those in the medical field. While still a medical student she was selected to sing an English song ”My heart will go on”(TITANIC) Celine Dion at the 184th anniversary of the GMOA in front of a packed audience. This song Dinithi has made it as a cover song of hers.Dinithi came to the limelight when she sang Shashika Nisansala’s famous song “Chandra Payanna” which was sung to a dance item by her colleague Thilini which was recorded by them in their hospital attires which had gone viral in the you tube with 100K views at the beginning itself. This was made into a vocal dance cover became trending termed “Corona Version”.

Dinithi even before passing out as a medical officer with a MBBS degree had recorded many solo videos despite her harsh study courses and examinations at frequent intervals.She had recorded one duet with a stalwart vocalist Dayan Witharana titled “ Jesu Swami Daruwo” with an appropriate video with a church setting, which is already a tremendous hit.The lyrics of the song was by Sujeewa Ranaweera while the music melody by the duo Ravi Rochana and Kavindu Kokil.Dinithi had also completed two more songs with videos namely “Sandawathie”,lyrics by Thilochana Nagoll and “Ekwa Negitimu” .Dinithi had contributed to many cover songs v.i.z.,”Prathihara” a song of Supun Perera, music by Senanga Dissanayake, lyrics of Shehan Galahetiyawa, “Duuwillen Handunu Liye” a popular song of Pradeepa Dharmadasa.

Dinithi recollects her most memorable moment in her singing career when she got the unique opportunity to sing  a duet”Neka Uyana Medin” with maestro vocalist Amarasiri Peiris at “Miyasi Sera” concert of her  “Alma Mater’ Southlands College Galle in November 2018 .All the above songs are made available in her you tube channel.Apart from the duet she sang songs that were recorded in year 2020 when she had to make time available clashing with her final MBBS examination. This is all the more creditable for balancing her studies with her singing which was obviously her passion.

Apart from above feats Dinithi is now a household name for her singing ability having been invited to sing in a number of television channels often like “Chat N Music”, “Raa Pedura” and in “Sihinayaki Re” in August 2020 ,where she had to sing with veteran vocalist Dayan Witharana the ten songs  the guest Dr Anurudda Padeniya selected.Dinithi received many accolades for singing in the above television programs for her impeccable vocal talents

Dinithi after passing out in the year as a MBBS doctor is attached to the Elpitiya base hospital where in addition to her medical profession has to oblige many with her singing expertise to fulfil the aspirations of many.All her fans would no doubt wish her more success in her singing career which is blossoming fast.