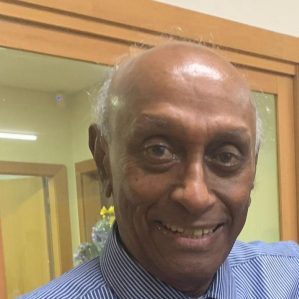 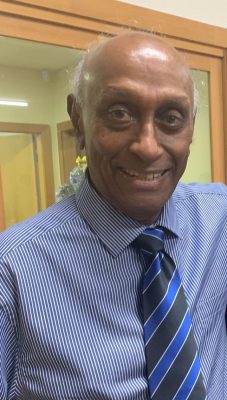 We moan the passing away of our dear friend and colleague M. Sri Bawan, one of the “terrible twins”, Sri Rangan being the other who passed away about three years ago in Canada.

Rangan & Bawan – both in Copleston/Claughton, one of the boarding houses at STC Mount. “Terrible Twins” –  perhaps not quite the right words to describe them but in College those who rioted (unlike on the streets today) were given such nick names! But to many of us his close friends, Bawan whom I got to know better, was more than a Thomian! He was kind, generous, thoughtful, fun loving person who lived his life to the fullest. The Twins were also called Rangan & Bangan by the Thomian fraternity. My wife Melba too loved Bawan very much and he lived with us whenever he came to his country of birth which he dearly loved. His passion was cricket and often spoke of how he wished he had played in the 1st XV Royal-Thomian match which some of us missed playing for one reason or another!

His love for his wife Sharmalee whom he chased after at the HNB had impressed her with his “Bawanish” charm. She was more than a wife to Bawan, she was his friend as well. Adrika was the love of Bawan’s life and the father and daughter bond was akin to divine love.  Sharmalee and Adrika were beside him throughout the years he went through the agonizing hours of Chemotherapy & blood transfusions that he had to undergo but he fought it to the bitter end and never once showed or complained about his condition. Such was this great human being! May God grant him eternal rest in his heavenly abode.

FIVE GOOD SUPER HABITS FOR THE YEAR OF THE TIGER 2022