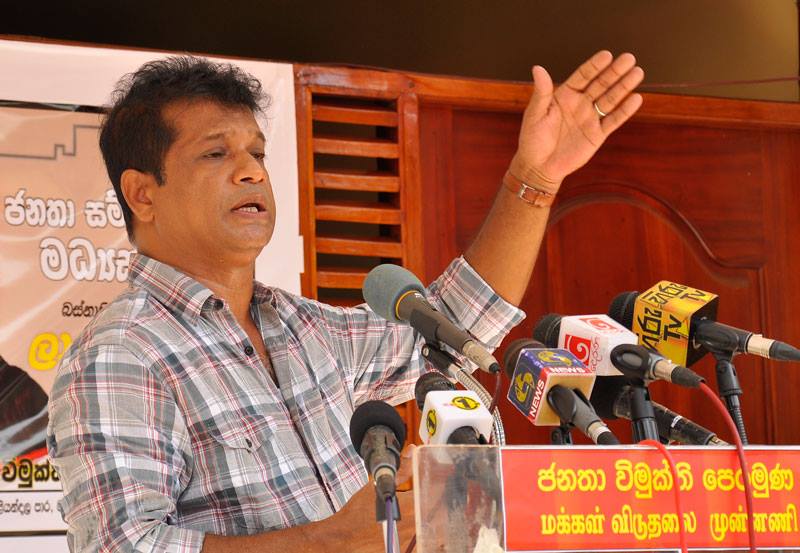 
ECONOMYNEXT – The ability to change leaders is a fundamental right and if the government delays Sri Lanka’s upcoming local government polls, the people must take to the streets, surround the president’s house and parliament if needed, and demand that the election be held, opposition Janatha Vimukthi Peramuna (JVP) former legislator K D Lal Kantha said.

Addressing a group of indigenous medical practitioners at an event on Friday January 20, Lal Kantha said that if the people cannot change their leaders through an election, those leaders must be “beaten and kicked out” (gahala pannanna oney).

“The people of Sri Lanka have changed and as a result the leaders are also compelled to change,” he said.

By delaying elections, he said, the leaders are giving the people a different message: “Kick us out.”

The former MP said the message would be that Sri Lankans must kick them out the way they did former President Gotabaya Rajapaksa, who was forced to resign after a wave of popular protests.

“[Former Prime Minister] Mahinda Rajapaksa and the cabinet left. Send us away like that. We won’t hold elections. Isn’t that what they’re saying? Yes, it is,” said Lal Kantha.

“If these people delay the election, if they push back the people’s right to change leaders, all ayurvedic doctors get ready to get on the streets and kick them out,” he said to somewhat muted applause from the audience.

“What else is there to do? The election was postponed by a year, and now they’re trying to delay it again. The people have changed,” he said.

The former MP said the local government election, scheduled to be held in March, has assumed the importance of a national referendum and must be treated as one.

“Better yet, they can all just resign. There’s no need to hold elections. There is no money for elections anyway. Let’s ask them to resign,” he added.

The outspoken former MP and trade union leader was in the centre of a controversy recently over a remark he had made to a group of female nurses. In that speech, Lal Kantha had said nurses ought to take care of their physical appearance and go to the gym to maintain their figures. The comment sparked much outrage, with many social media users calling it misogynistic and demanding that the party leadership condemn it.

The party has yet to officially comment on Lal Kantha’s remark and the controversy that ensued, though former JVP MP Sunil Handunnetti said at an event in Japan last week that his colleague’s statement had been taken out of context.

Meanwhile, there is still some uncertainty over the local government elections scheduled for March, though all parties including the ruling Sri Lanka Podujana Peramuna (SLPP) and President Ranil Wickremesinghe’s United National Party (UNP) have been busy making nominations and placing cash deposits for the polls.

Opposition parties including the JVP-led National People’s Power (NPP) and the main opposition Samagi Jana Balawegaya (SJB) continue to accuse the government of attempting to delay the election even at the last minute. The opposition insists that the SLPP is facing a humiliating defeat and that President Wickremesinghe is adamant that now is not the time for a local-level election. He is reportedly in favour of a presidential poll to be held after Sri Lanka secures a widely anticipated International Monetary Fund (IMF) bailout package and after the crisis-hit country makes more progress in its path to recovery. Government MPs also point to Sri Lanka’s dire economic straits as a reason to not hold elections at this juncture.

There had been a notable lull in protests in Colombo over the past few months until student unions and other groups launched a new series of protests last week demanding the release of Convenor of the Inter-University Student Federation (IUSF) Wasantha Mudalige who is currently in detention.

Government spokesmen claim that these protests are politically motivated and are not a genuine expression of popular discontent. (Colombo/Jan21/2023)

Sri Lanka gets first response from China over debt restructuring