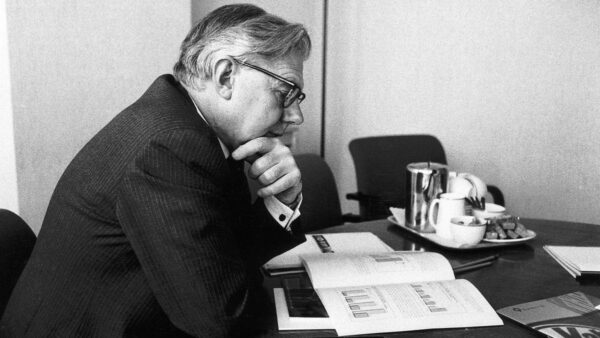 
Dixon when he was chairman in 1988, a tumultuous year for Rowntree

Ken Dixon snapped a stick off his daily two-bar KitKat and answered the phone. By the end of the call he might have felt he needed something stronger than coffee to go with it. It was 8.30am on April 13, 1988, and the stock exchange had spotted unusual activity in the shares of Rowntree & Co, the venerable York-based confectionery company of which he was chairman.

Representatives of Jacobs Suchard, the Swiss manufacturer of Toblerone chocolate bars, had been calling Rowntree’s institutional shareholders and offering a 30 per cent premium if they sold immediately. Dixon later discovered that they had been quietly acquiring Rowntree stock since mid-March, but neither he nor the company had received any formal approach. By 9.15am, Jacobs Suchard owned 14.9 per cent of Rowntree, a notch below the 15 per cent permitted under City rules.

There had long been speculation that Rowntree was ripe for a takeover, but no one had anticipated such a daring dawn raid. Dixon, who in 1962 had overseen the introduction of After Eight chocolate wafer mints, hit back, describing the move as “wholly unwelcome” and concluding in withering tones: “Jacobs may need Rowntree, but Rowntree does not need Jacobs.”

Five months earlier he had sat down in Paris for a more genial chat with Helmut Maucher from Nestlé, another Swiss rival. Nestlé had not previously engaged in anything as unseemly as a hostile takeover and while Maucher was interested in acquiring Rowntree, Dixon had made clear that any such move would be resisted. The pair had parted on good terms.

When Maucher learnt of Jacobs Suchard’s share-buying spree, he feared that Rowntree could fall into the hands of his Swiss competitor. Looking out over Lake Geneva from his office, he telephoned his Rowntree counterpart: “Our offer to help remains open, Mr Dixon, and I urge you to reconsider our proposals. Please keep in touch.” Dixon again politely declined.

Two weeks later Nestlé decided that Rowntree was too sweet a prospect to ignore and Maucher made a “white knight” bid, valuing Rowntree at £2.1 billion. Dixon remained implacable. “We have the best brands in the world and we are perfectly capable of exploiting them ourselves,” he declared. “We see no advantage in joining together with anyone.” Local shareholders, many of them Rowntree employees, echoed his sentiments, with one suggesting that they would sooner sell York Minster than Rowntree. “I don’t want £10 a share, even £20,” another said. “Rowntree belongs in York, not in Zurich.”

Support was strong. According to The New York Times, not since Ivar the Boneless led the Viking invasion in 866 had the residents of York put up such fierce resistance to foreign marauders. The Yorkshire Evening Press mounted a “hands off Rowntree” campaign, gathering 15,000 signatures and bussing 1,500 people to London to lobby parliament; the city’s lord mayor flew to Switzerland to deliver the same message in person to executives from Nestlé and Jacobs Suchard; and there were Rowntree rallies, with free KitKats provided. 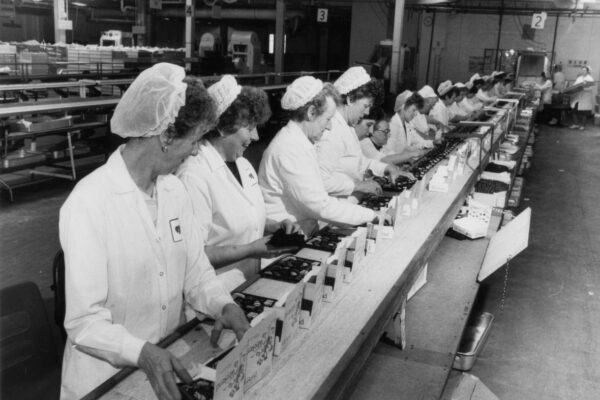 A Rowntree production line in Norwich

Yet as the tug of war continued, Dixon may as well have been sending chocolate soldiers into battle: Jacobs Suchard acquired more shares; Nestlé increased its offer; and Rowntree’s stock soared in value, tempting some small shareholders to sell. Dixon, who spent his rail journeys between York and King’s Cross reading Jane Austen, sought help from Margaret Thatcher, the prime minister. How could a British company be taken over by a non-EEC rival when Swiss law would not permit a similar move in the other direction? Files released years later suggest that within Downing Street the company was regarded as “just a lot of pinkos”, an opinion derived from the activities of the Rowntree family trusts, which were, and still are, independent from the company.

Even Rowntree’s own brand of Black Magic could not save the company and the government’s refusal to refer the takeover to the Monopolies and Mergers Commission (MMC) was the final blow. “The best Rowntree can do now is extract as much cash as they can from the Swiss,” one analyst said.

In late June, Nestlé won control in a deal that valued Rowntree at £2.55 billion (about £7.27 billion today). “It is a sad day for me that the long tradition and successful history of Rowntree as an independent company is ending,” said Dixon pragmatically, sucking on a fruit pastille. “But there comes a point when you have to face facts.” Nevertheless, there was still time for levity and at the height of the takeover battle Rowntree released Britain’s first blue Smartie, a reflection, perhaps, of the mood in the boardroom. 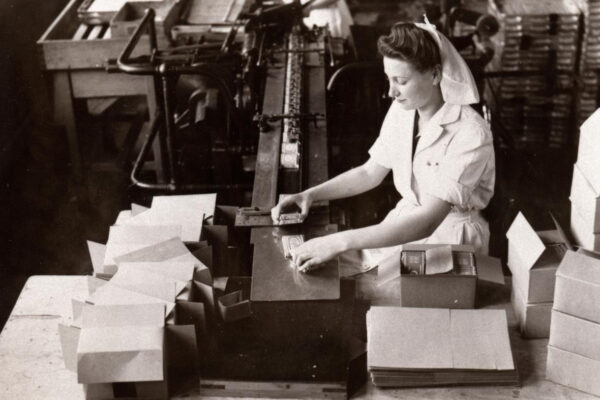 Packing KitKats at the Rowntree factory in York, 1949

Kenneth Herbert Morley Dixon was born in Stockport in 1929, the younger of two sons of Arnold Dixon, a shipping merchant with the family business, HC Dixon and Sons, and his wife, Mary (née Jolly); his brother, Graham, became principal research scientist at Shell UK and died in 2000. Their father’s work took the family to Shanghai, where young Ken was educated at the Cathedral School. In the early 1940s mother and sons moved to Australia, where he attended Cranbrook School, Sydney, though his father was interned in a PoW camp in Shanghai until 1946.

Returning to Britain he did National Service with the Royal Signals, taking part in the Berlin airlift, before studying economics at the University of Manchester. He joined the marketing department of Calico Printers Association, where he met Patricia Whalley. They were married in 1955 and in later life took part in weekly art classes together. She survives him with their sons, Mike, a chartered accountant, and Giles, an IT manager.

In 1956 Dixon joined Rowntree in York, promoting the company’s brands in ways that seem somewhat dated today. After Eight adverts, for example, featured manicured housewives above captions such as: “A woman’s place is in the home, eating After Eight and looking beautiful.” It was the late 1970s before they began to focus on the dark green-and-black packaging and the elegant ormolu clock showing two minutes past eight o’clock, a design based on a clock that once sat in the boardroom.

He was promoted to marketing director for the UK confectionery business and in 1969 was sent on the advanced management programme at Harvard Business School in Boston. Around that time Rowntree merged with John Mackintosh, which brought not only Rolo and Quality Street to the sweet jar, but also the permeance of Methodist morality that chimed with Rowntree’s Quaker roots. “The direct Quaker involvement stopped here a long time ago,” Dixon explained. “But the attitudes and traditions have not . . . We think very hard about our people; it is something that hangs in the air from the past.”

Many of the brands he worked on dated from the 1930s, including KitKat, Smarties and Aero. “One of the fascinating things of this business is that one can establish brands with very long lives — if you look after them,” he told The Observer. The key, he added, was to keep costs down but advertising and investment up. The latter involved everything from transport to advanced sweet-wrapping machinery. “If you don’t feed your money back, you don’t hold your place in the market,” he said.

Dixon was as good as his word. Not only did he invest in plant and people, he also went on a buying spree. Between 1983 and 1987 the company spent nearly £400 million on acquisitions, many of them in the US and Canada, including the Canadian confectioner Laura Secord. Nor was he opposed to initiating takeover bids, including one for Huntley & Palmer in 1981 that failed when it was referred to the MMC.

According to European Management Journal, by 1987 Rowntree was operating 25 factories in nine countries and employing 33,000 people. Its headquarters remained in York, where it had been founded in 1862 by Henry Isaac Rowntree. Under Dixon, who had succeeded Sir Donald Barron as chairman in 1981, Rowntree was the city’s largest employer with 5,500 workers, many of them second, third or fourth generation employees who enjoyed the company’s paternalistic traditions of employee and community welfare.

After the company was sold to Nestlé Dixon spent a year on the new board, later taking similar positions with Bass, Legal & General, Yorkshire-Tyne Tees TV and British Rail. He enjoyed fell walking, gardening and sailing his dinghy in Ireland and the Lake District, and he also retained a link to the Rowntree name, serving from 2001 to 2004 as chairman of the Joseph Rowntree Foundation, which undertakes research aimed at tackling poverty.

Dixon’s main preoccupation, however, became education. He chaired the council of the University of York from 1990 to 2001 and became one of its most significant benefactors, providing financial support for the Ken Dixon drama professorship, the Dixon drama studio and the Ken Dixon economics lecture. He likened the university’s continuing development to a transatlantic sea voyage, saying: “We know where we are going, but the route isn’t fixed.” Sir Ron Cooke, the former vice-chancellor, recalled that when presented with a proposal that did not sound right, Dixon’s disarming response would be: “Have another After Eight and let’s talk it through.”

The Terrorist Assault on Cricketers in March 2009: Pictorial Reminders