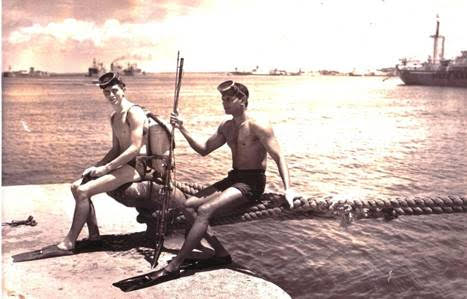 Ceylon In The Wild Beneath The Seas Of Ceylon   The Kinsross Swimming & Life Saving Club On the Beach stood the Original KS&LSC – established in 1940 . This great Club produced several Champions in Swimming & Aquatics. The Club produced several outstanding spear fishermen and introduced the sport of spear fishing to Ceylon. To name a few, the legendary Gerd Von Dincklage, Ralph Forbes, Ron Kellar,Tissa “Saigon “ Ariyaratne, Rodney Jonklaas, Carlyle Ranasinghe, Hilmi Khalid, Turab Jafferjee, Langston Pereira, Ron Bartholomeusz, Hildon Bevan were all world class spear fishermen. Rodney Jonklaas was an authority on marine life. Rodney invited Sir Arthur C Clarke and his companions Mike Smith and Tony Buxton to explore the wrecks off the coast of Ceylon and film the magic of the sea and glorious reefs of this magic Isle. Rodney Jonklass was the Assistant Superintendent of the Colombo Zoo in the days when the Dehiwela Zoo was one of the best in the world, The Superintendent of the Zoo, the legendary Aubrey Weinman also had a close Bamba connection. The Kinross bathing enclosure was situated opposite the site of the original KS & LSC. The enclosure was located in the sea. It consisted of two rafts and several orange barrels placed in a semi circle, a relatively safe bathing area for both bathers and swimmers. This was the idea of Mr. Guy Thiedeman, a champion athlete – Municipal Playground instructor and Lifesaver who resided in the area. However, several incidents of drowning did occur which prompted Mike Sirimanne, who was a regular swimmer, to decide that it was necessary for the presence of Life Guards. Mike with the help of his close friends, Herbert Pathiwela, Elmo and Lou Spittel, Anton Selvam, Ron Kellar, Basil Misso, Hugh Stewart were the first life savers, who received their training from Guy Thiedeman and later on Harry Nightingale, an Australian who introduced the Australian method of Surf Life Saving. This gave birth to the Kinross Life Saving Club in 1941. The club sought and obtained affiliation to the Royal Life Saving Society of U.K. and the Surf Life Saving Association of Australia. In the course of time the club ventured into competitive swimming and other aquatic sports and was named the Kinross Swimming and Life Saving Club with Guy Thiedeman the first President and Mike Sirimanne, the Legend of Kinross Club, General Secretary. The original HQ of the Club was a shack build by the founders on the beach opposite Kinross Avenue.

The K.S & LSC soon became a byword in swimming and dominated the Two- Mile Sea Swims. Swim Champions Gerd Von Dincklage, Ralph Forbes, Hugh Stewart. Hilmi Khalid.Carlislie Chalon, Allister Bartholomeusz, Ian Kelly, Tony Williams (1960 Olympics ) Desmond Templar, Rattan Mangharam, Randy Gray, Henry Perera, are names that come to mind. Other names who made significant contribution to the Club, wereTissa Ariyaratne, Gunaseelam Kanakratnam. Aubrey Van Cuylenberg (Water Polo, Ceylon Soccer goalkeeper), Langston and Fred Pereira.In 1955, the an improved clubhouse was built on the beach just opposite the Station.The club was built on the proceeds from the carnival, sponsored by Mr Thaha, which ran for about two months on vacant property owned by the William Pedris Family, free of Lease.. The Club was moderately damaged by the recent Tsunami and the present committee of management is hoping to restore the Club and improve the facilities for members. Unfortunately due to changing situations the Club is not in the forefront of aquatics any more. The fierce competition and the “Spirit of Kinross” for which the Club was renowned in the period 1941 – 75, no longer exists, sadly. Without Rodney Jonklaas former Assistant Superintendent of the Colombo Zoological Gardens at Allen Avenue, Dehiwela, original Member of Kinross Swimming & Life Saving Club, founder member of the Reef combers Spear fishing Club, the exploits of Arthur C Clarke & Mike Wilson would not reached the heights of underwater exploration in Ceylon. Aubrey Weinman was the Superintendent of the Zoo at that time which boasted to be one of the best in the world.Other great world class divers/spear fishermen of that era were Langston Pereira,Gerard von Dincklage, Hilmi Khalid, Carlyle Ranasinghe, (Mr Mussel beach) Turab Jafferjee, Ron Bartholomeusz, Tissa Ariyaratne, Hugh Stewart, all of the KS&LSC, and Carlyle Ranasinghe, Authokarale.There is another UK contribution from Jimmy Buxton whose wife was the Norwegian beauty Gunilla Buxton.Mention must be also made of the annual spear fishing competition between The K & Slsc and Reeefcombers for the Donavan Andree Challenge Cup. Spear Fishing, and Surf Life Saving in the period 1949 – 1965.

You are welcome to pass this on. 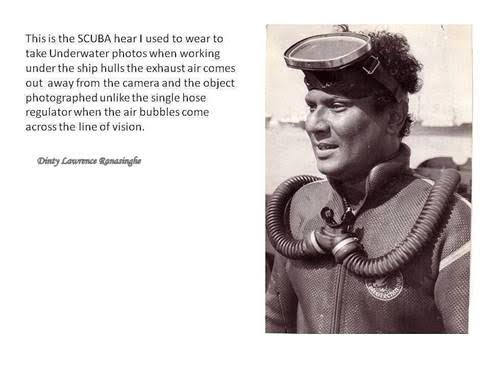