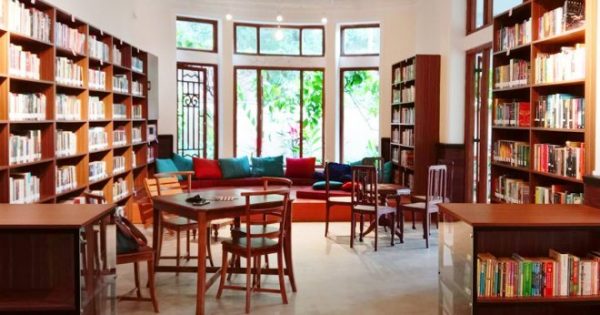 Anisha Dias Bandaranaike (27), is founder of the newly-launched ‘Lakmahal Community Library’. She told Roar Media that the idea to establish a library at her family’s ancestral home had been on her mind for almost three years. She finally started work on the project in 2019, and despite the delays due to the COVID-19 pandemic, the library took a little over a year and a half to come to life.

“It’s a project to get people to read more, write more and engage with literature,” Bandaranaike explained of her endeavour. “The goal is to bring people together and rebuild a sense of community, to serve that community in a literary fashion.”

Bandaranaike believes her idea for the library to be a permanent space where like minded individuals — from established authors and those who intend to be writers — can share a common space, is in tune with the spirit of the house.

“I wanted to do something that could serve the community and kind of keep that spirit of the house. Preserve that energy of a place where people could come and talk.”

What was once the house’s dining room has now been transformed into a comfortable library and reading area — complete with a half-moon-shaped reading nook overlooking the gardens.

Throughout the day, natural light seeps into this well-ventilated space, and minimal changes have been made to the original architecture. Any changes she did make, Bandaranaike said, were in consultation with her family, in order to ensure that anything integral to Lakmahal’s history remained intact. For instance, the old sepia coloured family photographs — some of weddings, others portraits of men in curled moustaches and steady gazes and women dressed in beeralu sarees with their hair tied into austere buns — still grace the walls of the living room.

Bandaranaike said she was inspired by local literary festivals — such as the Galle Literary Festival and the more recent Annasi & Kadalagotu — as well as bookstores she encountered while studying abroad like Washington DC’s Politics And Prose,  and sought to create a similar  space in Colombo.

Lakmahal was named — Bandaranaike thinks, based on anecdotes she heard from her parents — after India’s Taj Mahal. While ‘mahal’ retains the translation of the word ‘house’, ‘Lak’ refers to ‘Sri Lanka’, she said. It was built by Cyril Wickremesinghe, a civil servant of the colonial government and his wife, Esme Goonewardene in 1937. Their older son, Cyril Esmond Lucien, was born in 1920 —  his son was a three-time prime minister. The other children were Tissa, Lakshman and finally Mukta — an only daughter, and Bandaranaike’s grandmother, who was named after a pearl.

“[Lakmahal] was a house that always had a lot of people coming and going, moving about. It had huge parties , and ideas were shared constantly,” Bandaranaike said of the home that her mother Anila grew up in.

On Lakmahal’s 85th anniversary on 18 January (there is some confusion as to whether it is 17 or 18 January), the house opened the doors of its 1,500-book library to the public.

“More than anything, I associated the house with my grandfather, Sam Wijesinha,” Bandaranaike said. “He loved reading and writing. He loved books. More often than not, he would lend a book to another person, only to never see that book ever again. It was always about sharing what he found.”

The community library is overseen by a Board of Directors, comprising Dhananath Fernando (chief operations officer of the Advocata Institute), Priyanthi Fernando (executive director of International Women’s Rights Action Watch, Asia Pacific) , author Ameena Hussein and Chalani Ranwala (communications manager at Verite Research), who all serve in a voluntary capacity.

While it is currently self-funded, Bandaranaike hopes the library will eventually expand its operations to  set up an endowment fund and generate an income through events. She also hopes that it can one day provide writing courses at a fee to ensure the library becomes self-sustained and is able to function daily, as opposed to its current three-day operations.

Of the 1,500 books that the library currently holds, a majority were donations. The Lakmahal collection includes both nonfiction and fiction, ranging from mystery and thriller genres to young adult and romance, to science fiction and fantasy. An online catalogue of the books is available on their website.

Why has Fat got such a bad reputation when it provides health benefits?-by Dr Harold Gunatillake