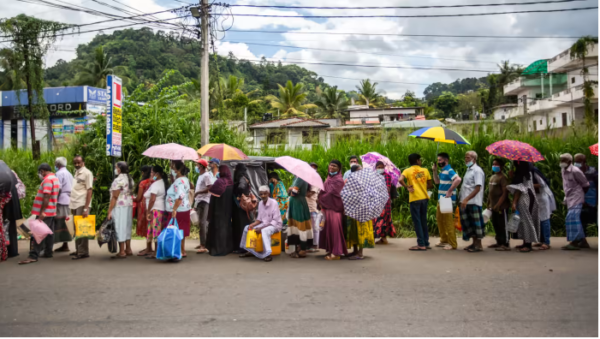 BANGKOK — Sri Lanka’s failure to settle interest payments on sovereign bonds and its subsequent ratings downgrade have drawn unflattering comparisons with the economic meltdown in Lebanon.

The South Asian nation on April 18 failed to pay interest of $78.13 million on $1.25 billion of bonds. Standard & Poor’s followed up this week with a downgrade to a “selective default” rating — the latest knife in the back of the debt-ridden economy.

Foreign investors who had bought the island’s international sovereign bonds (ISBs) were angry that they were misled by promises the debt would be paid. The principal cheerleader was Nivard Cabraal, the then central bank governor. Throughout he stood by views he had expressed to Nikkei in a February interview: “I am determined to pay [ISB holders.]”

“The market was expecting the April 18 coupon to be paid because of assurances by government officials that funds were available,” a London-based emerging markets investor holding Sri Lankan ISBs told Nikkei Asia. But it was “an illogical promise, Lebanon-level illogical,” he added, referring to the Middle Eastern nation that defaulted on its foreign loan payments in 2020.

Sri Lanka’s financial authorities informed international lenders a week before the coupon payment that the country was strapped for foreign reserves. In an $81 billion economy, those reserves had slumped to $200 million, money that is now critical to buying food and other necessities.

That made the country, which must settle foreign debt of $6.9 billion this year, a sovereign defaulter for the first time.

Through July 25, Sri Lanka is on the hook to pay off a $1 billion ISB and make interest payments on other multibillion-dollar ISBs. But since 2020, when ratings agencies downgraded the country’s debt to junk status, the familiar route of borrowing from international capital markets to pay off maturing ISBs has been shut to Sri Lanka.

By the end of that year, the country’s foreign debt was $38.6 billion, or 47.6% of the central government’s total debt, according to the International Monetary Fund.

Now new Finance Minister Ali Sabry is learning that international financial remedies can be slow and daunting. Economic analysts in Colombo, the country’s commercial capital, said the preliminary round of discussions Sabry had with IMF officials in Washington was a “reality check” for a government “not aware about a lot of things.”

These blind spots ranged from “the dangerous macro position that the economy was heading towards, the implications of taking foreign reserves to the brink … a debt default … and the time taken to get an IMF program,” said Anushka Wijesinha, co-founder of the Centre for a Smart Future, a Colombo-based public policy think tank. “The reality is certainly just sinking in, and I think everyone needs to be ready for an extended period of very challenging domestic economic conditions.” Protesters shout slogans and wave Sri Lankan flags during a demonstration in front of the Presidential Secretariat in Colombo on Monday. © EPA/Jiji

Sabry returned home empty-handed because the fund was requiring Sri Lanka to restore its debt to sustainable levels to qualify for a financial bailout.

“Any release of funds from the IMF is preconditioned to the fact that [Sri Lanka’s] debt needs to be sustainable,” Sabry, a senior lawyer and confidant of ultranationalist President Gotabaya Rajapaksa, told local media over the weekend, following his talks with the fund.

He had flown to the U.S. in the hope of securing $4 billion in emergency financing to help pay for enough food, fuel and pharmaceutical imports to get Sri Lanka through the year. These essentials are increasingly scarce and costly. In March headline inflation reached a record 21.5%.

Meanwhile, government policy flip-flops have left the population in economic pain, sparked unprecedented protests across the country and stirred up rage directed at the hawkish president.

While Sabry was in Washington from April 18 to April 22, the IMF gave him a list of what the government needed to do to address Sri Lanka’s twin deficits, its widening budget deficit and unbridgeable current-account deficit.

The IMF said Sri Lanka must implement a “credible and coherent strategy to restore macroeconomic stability,” Masahiro Nozaki, the IMF’s Sri Lanka mission chief, said in a statement. The strategy should also include “stronger social safety nets to mitigate the adverse impact of the current economic crisis on the poor and vulnerable.”

The government’s decisions to default on foreign loans and seek IMF assistance mark an about-face for Rajapaksa, who for months stubbornly resisted taking these steps despite repeated calls from independent economists that he do so.

While Sabry was in Washington conducting begging-bowl diplomacy, including with South Asian neighbor India, Rajapaksa admitted to making policy errors.

“During the last two and a half years we had vast challenges,” Rajapaksa said during an address to a new 17-member cabinet — the second group of appointees after his first cabinet resigned en masse in early April because of growing public anger. “[They included] the COVID-19 pandemic as well as the debt burden, and some mistakes on our part.”

The heavy economic price Sri Lanka is paying for the government’s delay has not been lost on opposition parliamentarians.

“If they went to the IMF earlier, we would not have defaulted on our loans and it would not have been so detrimental,” said Harsha de Silva, an economist and lawmaker with the opposition Samagi Jana Balawegaya party. “The people have realized the economic reality and consequence of bad policies — suffering [to] no end, no food, no fuel and no medicines.

Sri Lanka in talks with Russia for oil imports: Minister